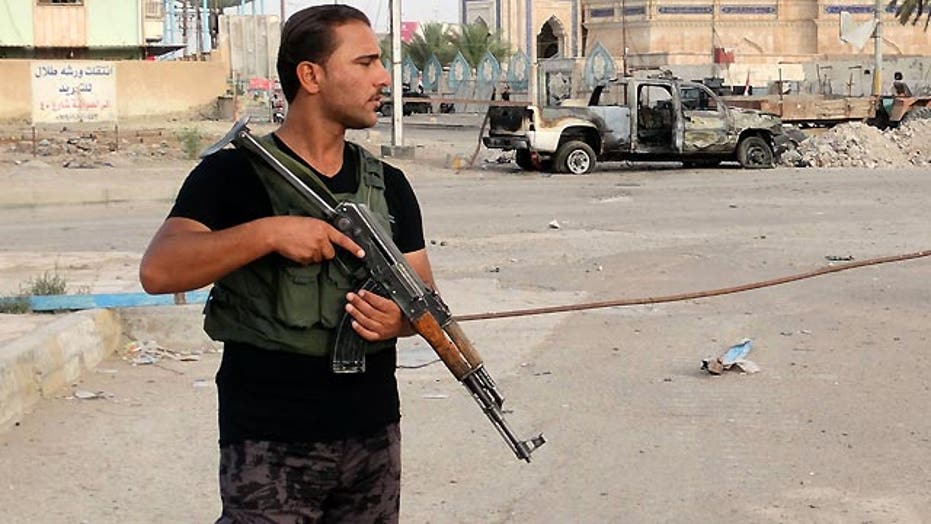 Why the fall of Ramadi is a significant setback

This is a rush transcript from "Special Report," May 18, 2015. This copy may not be in its final form and may be updated.

GEN. MARTIN DEMPSEY, JOINT CHIEF CHAIRMAN: The city itself is not symbolic in any way. It's not been declared part of the caliphate on one hand or central to the future of Iraq. I would much rather that Ramadi not fall, but it won't be the end of the campaign. Should it fall we have got to get it back.

I'm not trying to downplay the importance of Ramadi.

JEFF RATHKE, STATE DEPARTMENT DEPUTY SPOKESMAN: We have always known the fight would be long and difficult, especially in Anbar province. And so there's no denying that this is a setback, but there's also no denying that the United States will help the Iraqis take back Ramadi.

BRET BAIER, ANCHOR: A huge development inside Iraq as the city of Ramadi goes to ISIS, at least for the time being even as U.S. airstrikes continue. As you take a look at a map, Ramadi is close to Baghdad. It is the capital of Anbar province, the provincial capital. And it is a key city despite what the chairman of the Joint Chiefs said before. He did tell reporters today this, "ISIL's gains in Ramadi are a serious setback for its long suffering inhabitants. It's also a setback for the ISF, the Iraq Security Forces. Setbacks are regrettable but not uncommon in warfare. Much effort will now be required to regain the city. We'll continue to support Iraq security forces with U.S. airstrikes, training, and equipment, reducing sectarian tensions and preparing for reconstruction will continue to challenge the government of Iraq."

With that, let's bring in our panel, Steve Hayes, senior writer for The Weekly Standard, Philip Bump, political reporter for the Washington Post, and Dana Perino, co-host of "The Five."

STEVE HAYES, THE WEEKLY STANDARD: Yes. I think it's significant on two levels, one strategic and one political. It was absurd for General Dempsey to suggest that it has no strategic importance. Of course it does. As you mention, it's the provincial capital. ISIS already controls Fallujah. Between Fallujah and Ramadi you have a town called Habbaniyah. If ISIS can take Habbaniyah they basically have the western flank of Baghdad. That puts increased pressure on Baghdad. It means that the Shia militia, the PMU's will have to step up. You don't want to have that.

On the political side of things it dramatically weakens Prime Minister Abadi, who has been our partner in this effort. It suggests that the Iraqi Security Forces can't do what they are assigned to do. There's video of them fleeing. They were reportedly -- they outnumbered ISIS fighters but couldn't hold Ramadi anyway.

BAIER: Philip, we have seen this movie before in Mosul when Iraqi Security Forces kind of melted away and then ISIS ended up with American Humvees and weapons, and it appears that that's happening again in Ramadi. That's a big deal.

And I think too that it exemplifies why the strategy is a challenge. And the administration admitted airstrikes alone doesn't work very well in the city. If you don't have ground forces that can go into a city, then you're in trouble. And that's exactly what happened here. Americans were already skeptical of what happens happening with ISIS. I think this is going to resonate a lot more than the capture of one leader in terms of having them feel even more uncomfortable.

BAIER: They ended up killing him in the raid in Syria. But, Dana, your thoughts?

DANA PERINO, CO-HOST OF "THE FIVE": Well, certainly for me having had a chance to go to Anbar province and to see how the people had pulled together to try to fight back against the militias I think that Saturday was a terrible day.

I think the White House did actually try to sugarcoat it a little bit because you have the killing of Sayyaf, really good. The capturing of his wife, really good. At the same time they don't mention Ramadi, which I think is a bigger deal. We know what it's like when the government pretends that everything is going to be OK in Iraq until it is not. And I think that the president would actually be supported now if you would send in about 5,000 more special forces in order to help. But there has to be a political solution. And I just don't see who is the point person in the administration that could drive that.

PERINO: But he has 20 months to hand over a stable or unstable situation, and that's not a lot of time to do the right thing.

BAIER: All right, meantime the politics of Iraq is hitting the 2016 campaign trail. Take a listen to this montage of GOP candidates.

GOV. SCOTT WALKER, R-WIS.: Obviously, now, knowing what we know today I would not have gone into that war.

SEN. LINDSEY GRAHAM, R-S.C.: Going into Iraq, if I would have known now, would I have launched a ground invasion? Probably not. I would probably another approach to Saddam.

SEN. RAND PAUL, R-KY.: Is it a good idea to topple secular dictators, and what happens when we do? I think when Hussein was toppled, we got chaos.

SEN. MARCO RUBIO, R-FLA.: I still say it was not a mistake. A president cannot make a decision on what someone might know in the future.

CHRIS WALLACE, FOX NEWS ANCHOR: That's what I'm asking you. Was it a mistake?

RUBIO: It was not a mistake for the president to go into Iraq based on the information he was provided as president.

FORMER GOV. JEB BUSH, R-FLA.: We're all going to make mistakes. If you looking for perfect candidate, he probably existed 2,000 years ago.

BAIER: This whole thing stems from that interview with my colleague Megyn Kelly with former governor Jeb Bush in which she asked this hypothetical question. Steve, we are re-litigating now on the campaign trail the Iraq war.

BUMP: I think what's going to be interesting is the watch that this is an issue in the Republican primary. Of course there isn't really a Democratic primary, but Democratic voters are much more worried about the economy. We just saw a survey from NBC --

BUMP: That's a whole different issue. She's up to 39,000 minutes, we have a counter at the Washington Post, 39,000 minutes since she has answered a question from the media. It's a huge problem. We need to know where people stand on this issue.

Democrats aren't worried about that. Republicans very much are.  The thing that's going to be fascinating to watch is what happens with foreign policy over the course of the next 12 months and how that plays into the general election. When Hillary Clinton has to answer questions, is faced with a Republican opponent, the Republican base is very animated about this, Democrats aren't, and that's the point at which we're going to have to see how all of these cards have fallen.

BAIER: With the last name Bush, Jeb Bush has a particular sensitivity to this question and how he answers it.

PERINO: Right. Well, he knew that going in. This is eyes wide open. I think that's why it was unnerving for some to say, wait, why did you not answer that. Actually, if you look at that montage, they are all on the same page except for maybe Rand Paul. Everybody got to the same place of knowing what we know now. The question is, what will you do next? And I think that's also a question for President Obama. What sort of foreign policy is he going to hand over to them and what do they do from there? Character and temperament are the most important things for any voter going into 2016.