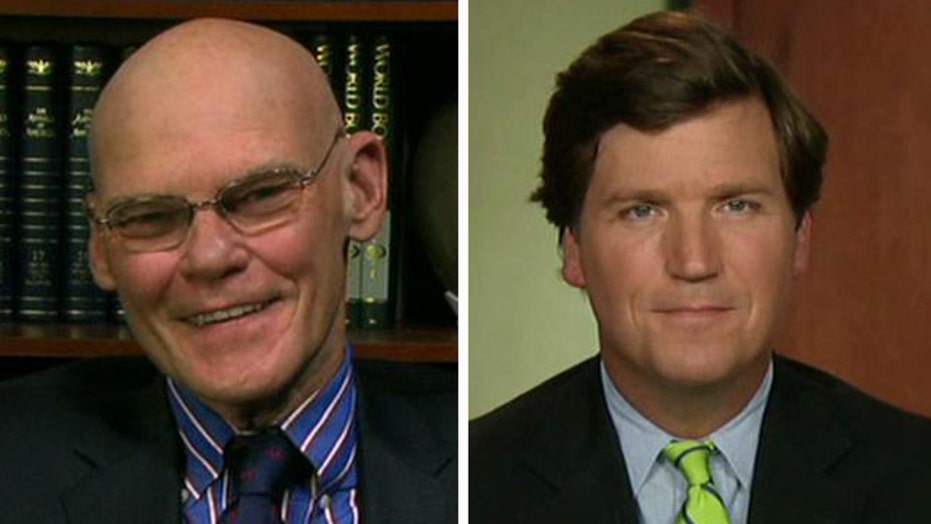 Why people are losing their health plans under ObamaCare

This is a rush transcript from "Hannity," October 30, 2013. This copy may not be in its final form and may be updated.

SEAN HANNITY, HOST: Here with reaction, Democratic strategist James Carville is back, and Fox News contributor Tucker Carlson. Why are you smiling, Carville?

JAMES CARVILLE, DEMOCRATIC STRATEGIST: Well, I just -- she was dragged before the committee? Are you sure that's the adjective that you want to use?

HANNITY: Oh. Do you think she wanted to be there? I don't think she did...

CARVILLE: I would not use the adjective dragged when I was referring to a 65-year-old woman who's a Cabinet member.

CARVILLE: But that's why I'm a Democrat.

HANNITY: I see a football helmet behind you. She certainly was providing a lot of cover for President Obama because she said, No, no, no, he's not -- it's me. And then she was asked, Who's your boss? Who is responsible, James?

CARVILLE: Of course I do. I think the idea of those guys sitting there beating up and a woman saying, "Gee, look, it's my fault, I take responsibility, I'm sorry this happened." And the truth of the matter is, on November the 30th, it'll work or it won't work. If it works, then they'll all look stupid. If it doesn't, then she'll look stupid. We're going to know on November 30th.

HANNITY: Tucker, we already know the website -- by the way, the year is 2013, Tucker! The fact that you can spend hundreds of millions of dollars and not get a stupid Web site working -- that ought to scare every American!

TUCKER CARLSON, FOX CONTRIBUTOR: Well, it's also 2013, and we can evaluate a woman's performance based on her performance, not on whether she's a woman or not. This is not a case gender politics. They're not being mean to the girl. She's an adult! She's a Cabinet secretary!

And by the way, to say that, I'm accountable but not really, I'm not going to resign, as she should -- look, the flaws of ObamaCare are so much deeper. The bottom line in one sentence is this is a massive transfer of wealth from the poorest segment of our society, young people, to the richest, old people! That's not going to work in the end.

HANNITY: All right, James, let's go back to one of the fundamental promises.

HANNITY: Let's go back to one of the fundamental promises -- Obama said this at least a hundred times. We'll play one version of it. If you like your plan, you can keep your plan. Watch. Roll the tape.

HANNITY: If you like your health care plan, you can keep it. Now, Marsha Blackburn had an exchange with Sebelius today about this very issue. And she wasn't promising you you can keep your plan. Let's roll.

REP. MARSHA BLACKBURN, R-TENN.: Madam Secretary, during -- before, during and after the law was passed, the president kept saying if you like your health care plan, you can keep it. So is he keeping his promise?

KATHLEEN SEBELIUS, HEALTH AND HUMAN SERVICES SECRETARY: Yes, he is.

BLACKBURN: OK. What do you say to Mark and Lucinda in my district, who had a plan, they liked it, it was affordable, but it is being terminated, and now they do not have health insurance?

SEBELIUS: Insurance companies cancel individual policies year in and year out. They are one-year contracts with individuals. They are not lifetime plans. They're not an employer plan. Your constituents will have lots of options --

HANNITY: James Carville, I would think -- I know you. You're a man of your word.

HANNITY: President made that promise...

HANNITY: ... and as many as 16 million Americans that have individual health plans, they're not keeping their plan, James.

CARVILLE: I don't know -- I would like to see that, quote, "health plan." Calling a bicycle a car doesn't make it a car.

CARVILLE: Wait a minute. No, I'm not ducking the question. Some of these -- most of the plans don't even cover hospitalization.

HANNITY: I'm not talking about the quality of the plan.

CARVILLE: ... a plan that meets certain requirements. That plan does not qualify...

HANNITY: The president didn't say that!

CARVILLE: No, again, you have to have a plan that meets the requirements. He should have said...

HANNITY: He should have said.

HANNITY: James, that's not what the president promised! The president said if you like your plan, you can keep your plan! And they knew...

CARVILLE: Keep talking. Calling a bicycle a car doesn't make it a car.

HANNITY: Not answering the question.

CARLSON: Talk about blaming the victim! I mean, you're...

CARLSON: Absolutely. You're saying you deserve to lose your plan because in our view, it's not good enough...

CARLSON: ... because we care more about your family than you do.

CARLSON: It's not a good enough plan. Your house is in bad taste. I think I'll knock it down.

CARVILLE: No, actually, Tucker, it's worse than that. If you don't have health insurance...

CARLSON: It couldn't be worse than that!

CARVILLE: Let me tell you what it says. If you don't have health insurance, you have to buy it. You can say, I choose not to have it, but then you show up and you're a burden on the entire health care system. What this does is...

CARVILLE: ... it actually forces you to have health insurance, which I think is a remarkably good thing.

CARLSON: Health insurance that includes all kinds of add-ons that various interest groups have lobbied for. So I'm paying for someone's Rogaine treatments and your birth control treatments, whether I want to or not! It's a transfer of money from me to you, from the responsible to the irresponsible, from the poor to the rich!

CARVILLE: Actually, it's irresponsible not to have hospitalization.

CARLSON: Why not tell me what kind of toothpaste I can use?

HANNITY: James, what if somebody has...

HANNITY: James, what if somebody has a catastrophic plan, a young person, that they pay 98 bucks a month for? Now they can't have that plan. And the president made that very explicit promise! And you don't...

CARVILLE: Of course they can have it as long as they have a basic plan which covers 10 elements that are...

HANNITY: They're not keeping the plan!

CARVILLE: ... I can have a plan that insures me against ovarian cancer. That's not a health care plan.

HANNITY: All right, this is -- we got to the take a break. Hang on. You know what this reminds me of? When your buddy, Bill Clinton, said about Monica, "We were alone..."

HANNITY:" ... but I never really thought we were alone." That's what it sounds like! An outright lie!

CARVILLE: Back to Monica Lewinsky. You have to think of something else, man.

HANNITY: Well, it's not a matter of thinking. It's a matter of -- I expect our president to be honest...

HANNITY: I want a president to tell the truth!