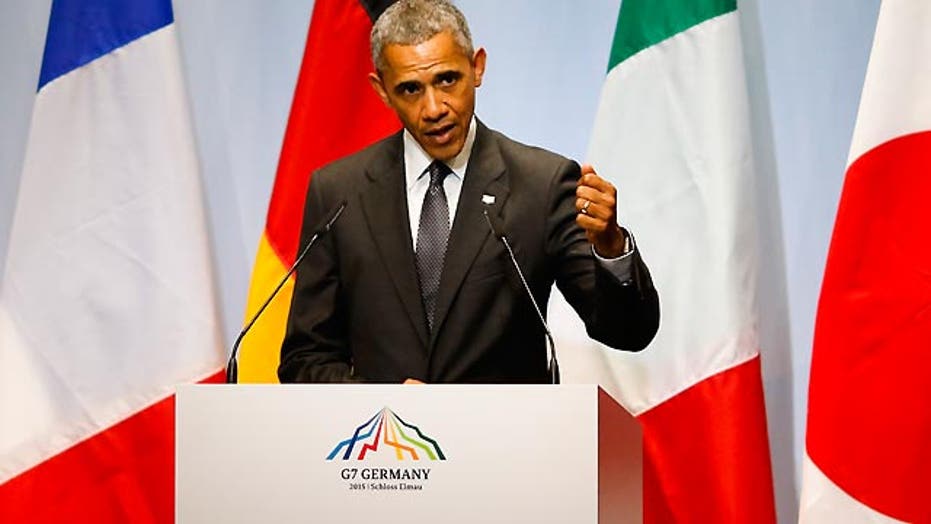 Why Obama still has no plan to deal with ISIS

This is a rush transcript from "Special Report," June 8, 2015. This copy may not be in its final form and may be updated.

PRESIDENT BARACK OBAMA: I don't rule out anything because we do have a stake in making sure that these jihadists are not getting a permanent foothold in either Iraq, or Syria, for that matter.

Even as we carry out these two missions, we will continue to pursue a broader strategy that empowers Iraqis to confront this crisis.

I don't want to put the cart before the horse. We don't have a strategy yet.

Our objective is clear. We will degrade and ultimately destroy ISIL through a comprehensive and sustained counterterrorism strategy.

We don't yet have a complete strategy because it requires commitments on the part of the Iraqis as well.

BRET BAIER, ANCHOR: Well, a little evolution of the president talking about ISIS and the strategy or lack thereof of ISIS in Iraq and ISIS in Syria, today saying, as you just hear there, not a complete strategy yet, waiting for the Pentagon, he said, to send him finalized plans, which sparked a reaction. Not on camera, but anonymously, a military official telling our FOX producer at the Pentagon after that statement today "What blank was that? We have given him lots of options. He just hasn't acted on them."

This as a new poll comes out that says that the American public doesn't truly believe that the Obama administration has a clear strategy, either. Take a look at those numbers -- 71 percent no, 19 percent yes.

If it seems like Ashton Carter, now the president, is putting a lot of the blame on the Iraqis -- they haven't reached out enough to the Sunnis, they don't have the will to fight. That is what the president is doing today. OK, well, then what? He hasn't figured that out yet. Maybe you need more American troops there. There are some Republicans who are willing to say that, not all of them. But it is going on year after year after year, and the situation there looks like it's deteriorating.

BAIER: Yes, in fact on that training, we've heard the training is happening. You saw from the first graphic from the Pentagon official, again, underscoring the work to be done training Iraq forces, a Pentagon official telling Fox that zero soldiers are being trained at the Al Assad air base in Anbar, the province where ISIS seized Ramadi last month.

STEVE HAYES, THE WEEKLY STANDARD: I mean, the rhetoric is very reminiscent of the Bush administration's rhetoric before the surge. It was all about training, we were going to be able through some miraculous training regimen, win the war. It wasn't going to happen then and it certainly isn't going to happen now.

I think the biggest problem that the United States faces is, if you look at the way the Iraqis are viewing our presence there or non-presence there, they have no confidence in us. So the Sunnis are seeing that the United States isn't willing to correct former prime minister Maliki's purge of Sunni forces from, Sunni troops from the Iraq security forces. The Shiites look next door to Iran and think that's a better ally than the Americans. And the Kurds just look at us in despair and wonder what's keeping up from helping them. The fact that the president acknowledged that the United States doesn't have is news, but the fact that we don't have a strategy isn't news at all. It's been apparent to everybody for nearly a year.

BAIER: Is this a traditional Washington gaffe, the truth, the Michael Kinsley gaffe?

CHARLES KRAUTHAMMER, SYNDICATED COLUMNIST: Obama occasionally stumbled on the truth, and this is a Kinsley gaffe in which you say the truth. And 71 percent of Americans knew it even before he said it. You have to wonder what the other 19 percent are thinking who think he has a strategy when he admits he doesn't.

John McCain had the best line. He said when Obama says he doesn't have a complete strategy perhaps he will tell us what his incomplete strategy or partial strategy, any idea of a strategy is. And the answer is there's nothing here.

The reason is Obama's entire strategy rests on the notion that trained Iraqis under this government are going to carry the fight to ISIS. They tried it in Mosul. They tried it in Ramadi and Fallujah, and they keep, as General Dempsey said, they weren't driven out of Ramadi. They drove out after Ramadi. The idea that it's a lack of training, it's obviously what Ashton Carter said, a lack of will. Obama delicately said we have a focus problem. The Iraqis, they are not ready, they are not trainable, they are not showing up to be recruited. And they have to be more focused. Focused? It's a war. Can you imagine FDR saying the problem with our allies against Hitler is the Russians and the British are simply not focused on the war against Germany? This is a country abandoned by Obama in 2011 and threw in its lot with other players, and now we are trying to reclaim that. It cannot be done.

BAIER: Mara, have you seen this video of the Iraqi prime minister sitting next to the president at the G-7?

LIASSON: No, I've read about it. I haven't yet.

BAIER: And there is a moment, an awkward moment. Here you see it. He sits down, Abadi, and obviously the president is talking to other leaders and talking about, we don't know what, but there is the prime minister and his main kind of guy, and gets up and then looks at his watch and then walked away.

But that's an amazing piece of visual. It's an explanation of what is actually happening. The United States doesn't know what to do in Iraq.
And if they can't do it themselves, then maybe we either have to have been there longer or we have to stand them up until they do. But unless we are willing to have Iraq become a kind of vassal state to Iran and have Iran do it all. If that's what we are comfortable with, the president should say so.

BAIER: When you talk to the military, they really feel like their hands, some of these commanders, that their hands are tied, that they are not being able to go out with the Iraqi forces and actually be the force that stiffened up a lot of those Iraqi troops in those years leading up to pulling all of the troops out.

HAYES: Let me be clear. I don't think the president was telling the truth when he said he hasn't received plans from the Pentagon on how to defeat ISIS. I'm certain that that is not the case. Having said that, you listen to what the president said today, he said, well, we really need the Sunnis to stand up as they did back in the 2006 timeframe when, along with the U.S. surge, they defeated Al Qaeda in Iraq, the predecessor to ISIS. But of course the president omits the most important factor there, and that is that George W. Bush I think had the courage to say we are doubling down on our commitment on Iraq. It was an unpopular political position here at home. It was a risky position to take given the cost we had already incurred in Iraq. And George W. Bush did it anyway. And that sent a message not only to the American people who were skeptical of the move, but to the Iraqis on the ground who said this is a president committed to winning, and win we did.

KRAUTHAMMER: And when Obama ordered the full evacuation, the Anbar Sunnis who had joined us in the war against Al Qaeda in Iraq and expelled them and humiliated them, they were abandoned. They were then persecuted.
They were pursued by the central government in Iraq, and Obama did not lift a finger. Why should they trust America again?

Just one point -- the idea he would now put the blame on the Pentagon for having lack in offering plans is exactly consistent with Obama's method, which is always to blame others.

LIASSON: Quickly, if that strategy was followed, there probably would be more Americans who would die over there. The question is, would the American public accept that? It seems like in some of the polling that they are willing to take that risk.