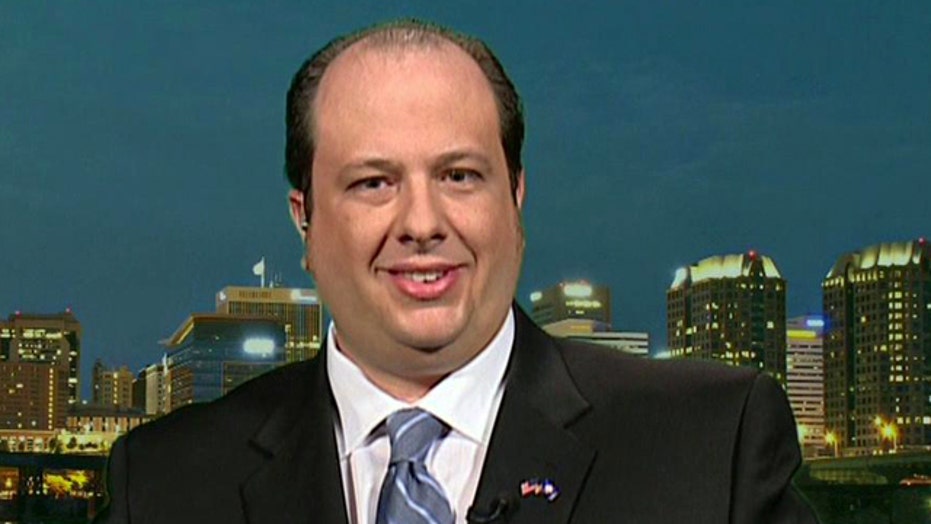 Why Mike Dickinson wants the FCC to regulate Fox News

This is a rush transcript from "Hannity," February 25, 2014. This copy may not be in its final form and may be updated.

SEAN HANNITY, HOST: My next guest Mike Dickinson is a Democrat running for Congress with hopes of unseat House Majority Leader Eric Cantor of Virginia. His main campaign tactic appears to be to attack Fox News. He recently tweeted, quote, "Fox News does nothing but tell lies and mistruths. They have unqualified political analysts. We need the FCC to monitor and regulate them."

Joining me now to defend his position, Mike Dickinson. Fox News does nothing at all but tell lies and mistruths.

HANNITY: Everybody on Fox News, all day long, 24 hours a day, seven days a week, we've never told the truth ever on Fox? All we do is tell lies? We do nothing but tell lies? That's all we've ever done is tell lies?

DICKINSON: You tell lies there, you distort the truth, you promote hate. Everything you do is designed --

HANNITY: How do we promote hate?

HANNITY: I asked you a question. How do we promote hate?

DICKINSON: I'm going to tell you how you promote hate. Let's talk about our President Obama for a moment.

DICKINSON: All you do on your show is you refer to --

HANNITY: All you do on your show is -- you keep saying, broad, sweeping. We have shows 24/7. You're saying that we've never told the truth on the air ever? We never tell the truth.

DICKINSON: I think you sound silly. But let's talk about how you distort the news. President Obama, ObamaCare, the Affordable Care Act is not socialism. All you do on your show is call it ObamaCare this and ObamaCare that.

HANNITY: Do you support ObamaCare?

DICKINSON: I do support the Affordable Care Act, yes I do.

HANNITY: Let me ask you a question. Did President Obama promise if you like your plan you can keep your plan?

HANNITY: And have people gotten their plans canceled?

DICKINSON: They did, just like when George W. Bush stood on the aircraft carrier and said "Mission accomplished."

HANNITY: Bush has been out of office six years.

HANNITY: Did he say, if you like your doctor, you can keep your doctor?

DICKINSON: He did say that.

HANNITY: Did he say the average family savings would be $2,500 a year?

DICKINSON: He may have said that, he probably did.

HANNITY: The bottom line is, he told lies and mistruths, the very criticism you have against us, and yet you support him. What does that make you?

DICKINSON: Well, so do you. Let me make my point.

DICKINSON: It is not. You can choose your own plan.

HANNITY: You can choose your own plan. What about the people that got kicked off, they can't choose it, can they?

DICKINSON: They got kicked off of their plan because the insurance companies are greedy.

HANNITY: No, they got kicked off their plan because --

HANNITY: The president didn't tell them the truth, because he said they could keep it.

DICKINSON: As with anything legislatively, there's going to be small errors that occur.

DICKINSON: And a great number of those is because the insurance companies --

DICKINSON: If these businesses and insurance companies act correctly and do the right thing --

HANNITY: Did he lie? The president when he promised America, if you like your plan you can keep it, period, he said. Did he lie?

HANNITY: Did he tell a mistruth?