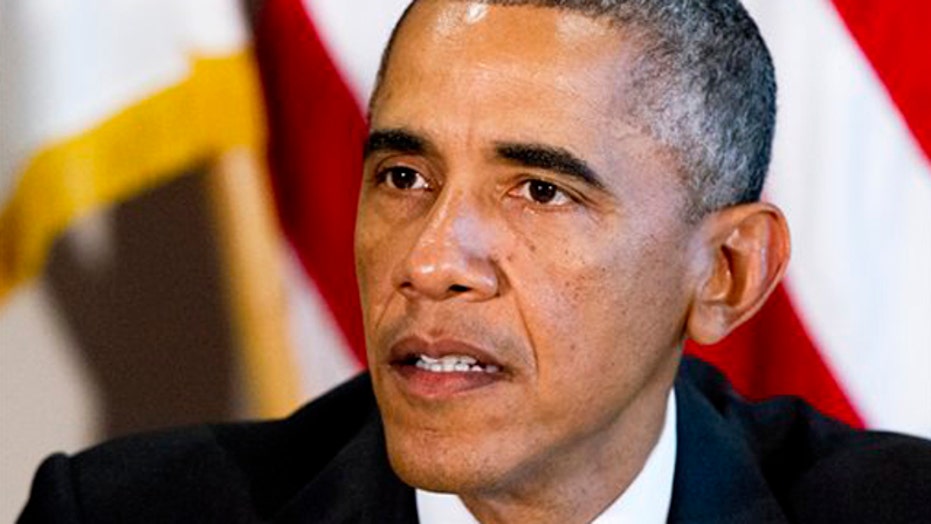 Why did President Obama mislead America about Benghazi?

This is a rush transcript from "Hannity," October 8, 2014. This copy may not be in its final form and may be updated.

BILL O'REILLY, HOST: On the night of the attack, say, you told President Obama you believed it was not a spontaneous attack, it was a terror attack. Is that correct?

LEON PANETTA, FORMER DEFENSE SECRETARY: General Dempsey and I were over talking to the president when we got word about what was happening. And what I told the president was that there was an attack that was going on in Benghazi and that we were concerned that the consulate there was in trouble. And it was based on that that the president then said, "Well, let's try to do everything we can to try to see what happens."

O'REILLY: Did you use the word terror attack?

PANETTA: I used the word attack, that there was an attack by terrorists.

HANNITY: There was an attack by terrorists. So, if the president was told it was a terror attack right away, why did he then deliberately mislead you, the American people, in the days and months that followed?  Remember this?

O'REILLY: Did he tell you, Secretary Panetta, it was a terrorist attack?

PRESIDENT BARACK OBAMA: You know, what he told me was that there was an attack on our compound.

O'REILLY: He didn't use the word terror?

OBAMA: You know, in the heat of the moment, Bill, what folks are focused on is what's happening on the ground, do we have eyes on it, how can we make sure our folks are secure. So...

O'REILLY: But I just want to get this on record. Did he tell you it was a terror attack?

OBAMA: Bill, I'm answering your question. What he said to me was we got an attack on our compound.

OBAMA: We don't know yet who's doing it.

HANNITY: Here with reaction are the co-authors of "13 Hours: The Insider (ph) Account of What Really Happened in Benghazi" -- two members of the annex security team, Mark Geist and Kris Paronto are back with us.

Guys, good to see you again. Welcome back.

So, Leon Panetta said that he said that the consul (sic) was under attack, was it by a terrorist, yes, I used the word attack, there was an attack by terrorists -- a direct contradiction. The president of the United States, then, according to his own secretary of Defense, lied! You both knew it was a lie at the time, didn't you, when you heard that -- what their explanation was.

MARK "OZ" GEIST, BENGHAZI ANNEX SECURITY TEAM: Oh, most definitely, Sean. Most definitely. You know, I was laying in bed in the hospital in Landstuhl when the State Department representative was there. And you know, we discussed the same issues.

KRIS "TANTO" PARONTO, BENGHAZI ANNEX SECURITY TEAM: What I first thought that, why on Earth are they saying -- I've said it a million times now. Why are they lying about what happened that night? Why are they misleading people, when we knew the truth and we had passed it on to our superiors at that time, as well?

It just -- it made me very angry, and it still makes me angry to this day. And you know, I'll say that a million times again. It was misleading. It was not the truth. It was a lie. That's basically it.  What else can you say?

HANNITY: So remember Susan Rice did the Sunday shows, what, five of them.

HANNITY: And she repeated this over and over and over again, the talking points. But then even two weeks later, the president himself -- - he said at the U.N. that it was, in fact, related to this video. In your mind, then, does -- do you conclude -- Kris, I'll start with you -- that the president of the United States consciously and purposely lied to the American people?

PARONTO: I don't think you can think anything other than that. It's -- if you're connecting the dots, you know, what else can you say? It was put out there. We said what happened that night. We told our superiors.  Now, I don't know if it got up to him. But if it didn't, what are his subordinates doing? What are they telling him, if they're not...

HANNITY: ... saying it didn't go up to him, but we know that Leon Panetta told him as it was happening that there was an attack by terrorists.

HANNITY: Yes. I've been saying that from day one.

HANNITY: Yes, who has an RPG, you know, a rocket-propelled grenade, in their back pocket of a spontaneous demonstration? You know what? Oh, let me pull it out of my pocket. I think we'll start a terrorist attack here.

HANNITY: So it never made sense to me. It's more serious because we lost four Americans. The mother of Glen Doherty (ph) spoke to Greta Van Susteren. Here's what she said.

(BEGIN VIDEO CLIP, "ON THE RECORD")

GRETA VAN SUSTEREN,  HOST: Do you have any problem with the fact that -- -- that even to this day, you're reading different stories about what happened?

BRENDA DOHERTY, GLEN DOHERTY'S MOTHER: Some of the stories, like Glen went up to help, and one of the fighters on the roof said he was the only one that came up to help. That's a good story.

VAN SUSTEREN: Do you have any -- you know, I guess criticism is a harsh word, especially from the mother of a child who's lost his life, but about how the government handled it that night?

DOHERTY: Well, the more we're finding out, the more criticism you feel, yes. I felt in the beginning that it was such chaos that it couldn't be helped. But now, as more details have come out, yes, it could have been prevented and it wasn't.

HANNITY: Mark, if I remember, you were there when Glen Doherty died, right?

GEIST: Yes, he was about four or maybe six feet behind me.

HANNITY: And so what would you tell his mom because, obviously, she hasn't even gotten the truth yet. That's a recent interview. What do you want her to know about what her son did that night?

GEIST: You know, it's a hard one. But Sean, you know, her son was one of the bravest guys I've met. He came up on that roof with -- didn't -- you know, no regard for himself, to help out, to do what he could, to lend a hand, I mean, because he had, you know, the experience as a sniper.  He's a shooter. He's drawn to the fire -- the gunfire. I mean, that's where it's at. That's where it's happening.

GEIST: That's where you're going to...

HANNITY: Kris, after you were given the stand-down order, he was one of the guys that defied orders, risked his whole career and his life and then gave his life because...

PANETTA: No, that was Tyrone.

GEIST: Yes, that was Therapy -- we were talking about Glen coming up on the roof once the Tripoli guys got there, yes.

GEIST: You know, I'm actually finding out these things myself that they weren't told. It disgusts me. If it was my mother, she would be up in arms. I can't believe that now they're finding out what's going on after we came out with the book two years after -- almost two years after the fact. It's disgusting. And it's stuff that if we would have known earlier, as well, we would have went directly to the -- to the -- to Glen's mother and also Pat Smith and said, Hey, lookit -- you know, even though it would have been even detrimental to what we were doing...

PARONTO: Things are still coming out. It's just ridiculous.

HANNITY: So just to conclude, our government you have no doubt was lying and covering up!

GEIST: That's the only conclusion that can be drawn from the facts that are out there.

GEIST: I mean, I think it would take a blind man -- blind and deaf man not to know that.

PARONTO: How much more do you need? I guess we'll keep giving them more if they need it, though.

HANNITY: All right, guys. Thank you. Appreciate it.