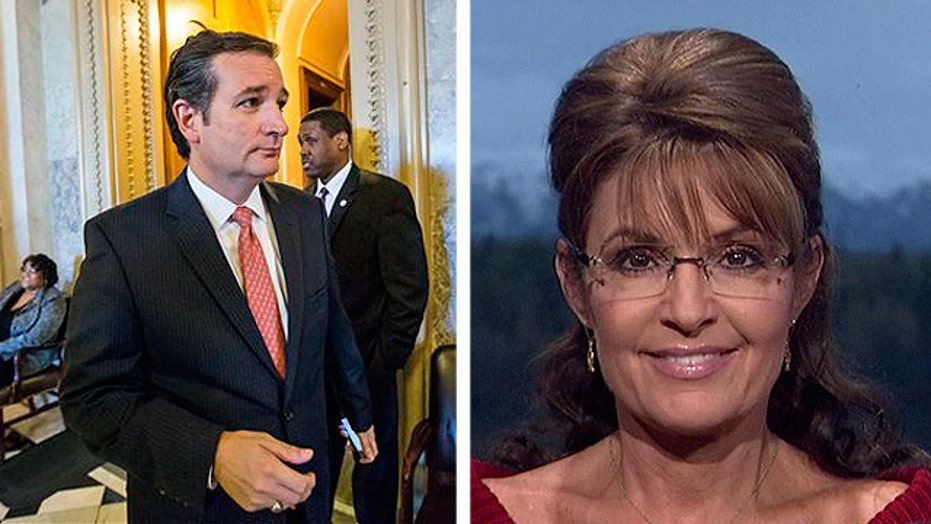 Why defunding ObamaCare is the only 'tool' for Republicans

This is a rush transcript from "Hannity," September 24, 2013. This copy may not be in its final form and may be updated.

SEAN HANNITY, HOST: Joining us now with reaction, someone who has been in Senator Ted Cruz's corner from the very beginning -- she also endorsed him -- Fox News contributor, former Alaska Governor Sarah Palin. Governor, it's been a while. Good to see you. Welcome back.

SARAH PALIN, FOX NEWS CONTRIBUTOR: Thank you so much, Sean. Hey, you know if Ted Cruz runs out of material there to speak of in this filibuster of his, he can always just read the ObamaCare bill itself. Because I bet you no one else there on the Senate floor has actually read it.

HANNITY: Look, no one could survive reading it that long, Governor, I think that would be a little too long for, you know, --God help him. He would be there the rest of his life.

PALIN: Yes. But if he would read it, though, then perhaps Nancy Pelosi, she would be watching the C-Span station there and she's be able to say, oh, that is what is in it. Twenty thousand pages of ObamaCare including these regulations, and it is only going to grow. You know, this Bible and it has large font and it's full of commentary, this Bible itself has only 16 hundred pages. Can you imagine 20,000 pages of bureaucracy of a boot on your neck, bureaucracy like ObamaCare that nobody has read?

HANNITY: No, not really. And this gets to the hard of it. You know what is a little sad? As of this hour -- and I have been appealing to people all day. This, to me is a tipping point, Governor, a moment of truth. Is this going to be a revitalized Republican Party with bold differences? They don't want ObamaCare. Didn't they all run and vow that they would repeal and replace? Why, as of this hour, Ted Cruz, Mike Lee, Marco Rubio, Rand Paul, Senator Vitter, Pat Roberts and Senator Inhofe are the only ones supporting and standing with Cruz. What is your reaction to that? Where are the other 39 Republicans?

PALIN: Well, Sean -- well and the Democrats. Remember many Democrats had recently come out against ObamaCare saying specifically they understood now about the death panels and other things. And that ObamaCare, as the court said, is actually a tax that they had not been aware of previously. And these Democrats even who had opposed it, where the heck are they?

Sean, what you are suggesting is this is something much greater than just this boot on the neck, jam down your throat America, socialized health care coverage program of Obama. It is going to be run by the IRS. It is greater than that. Ted Cruz loves his countrymen and he does not want to see us destroyed by bad selfish policy so he fights for what is right. And yet the naysayers Sean are telling us that this is a lost cause. Fighting for what is right. Fighting against a program that is so bad that Congress itself exempted itself out of.

HANNITY: By the way, let's dip in right now. Apparently, Senator Dick Durbin, a Democrat, has jump on the floor, I'm sure to kind of interrupted Cruz, let's see what's going on.

SEN. TED CRUZ, R-TEXAS: I am getting the answer to your question but it is a detailed answer. And so if you will forgive me, I'll take a few moments to lay it out. The first step in my view to this --

HANNITY: Governor, the question that Dick Durbin just asked is, does Ted Cruz wanted to shut down the government and does he have enough votes?

Now, Governor, we know the answer to that is no. Now, I keep hearing -- now, Senator Mitch McConnell said today, he actually took a shot at Cruz and said, his strategy is to de-fund ObamaCare, et cetera, et cetera, that Ted Cruz, literally accused of wanting to keep fund ObamaCare and shutting the government down. There is a parliamentary move here, if the Republicans vote for cloture, then that allows Harry Reid to strip a defunding provision and then it allows a simple majority to pass it. And what Ted Cruz is saying, that the real vote, the only vote that matters, if they vote against -- if the Republicans vote against cloture, it will prevent Reid's amendment to strip the de-funding. It gets complicated. But I support what Cruz is doing. Why aren't these other Republicans -- what do you think there are other quote, "tactical differences?"

PALIN: Well, they are expecting that the American people will not be keeping up with the political leads that is a part of this kind of arcane senatorial rules, you know, they are kind of tough to follow. You know, you get kind of go glassy eyed and trying to follow what exactly is going on.

But Cruz is right when he explains that a vote for cloture to cut off debate, and just to take a vote on this CR and allow Senator Reid to take out the de-funding mechanism that is part of the CR now, a vote for that will be a vote for ObamaCare.

Let me go back to those, though, who are calling this a lost cause. And I don't know if you saw "Mr. Smith Goes to Washington." Mark Levin reminded his listeners of this today.

PALIN: In that movie, when Jimmy Stuart's character said, a lost cause during his own filibuster, his character, he said a lost cause is the only one that's actually worth fighting for because a lost cause, the only reason you would fight for such a thing is for one reason, one plain, simple reason, and that is love thy neighbor. And in a world today that is full of hatred, that one politician who understands that virtue, "love thy neighbor," is going to fight, until his political death if he will in order to do the right thing and in that he had a great trust.

So, our people going to trust that virtue, "love thy neighbor," and in this case, loving the country, so that we won't be insolvent under ObamaCare, or are you going to love this deceptive program called ObamaCare that they passed not knowing even what it was really entailing.

HANNITY: You know, Governor, this reminds me a little bit -- remember when Reagan challenged the sitting President Gerald Ford in 1976, and a lot of Republicans were angry. He came very close, very close in that battle against Gerald Ford. This seems to me to be a real showdown in the Republican Party between conservatives and more establishment types. Because my feeling is that every Republican in the Senate stood with Cruz, if they would stand with him here, they could effectively stop, they can fund the rest of the government like the House did and they could stop ObamaCare. And then it is going to be the president's choice and Senate Democrats choice if they wanted to shut down the government after the rest of the government is funded. Why won't they do that?

PALIN: Well, you're right, and the states then can do what happened back then during our bicentennial year in '76, I remember, I was going into junior high. And the world's eyes and ears were on debates at that time and what was going to happen. What Reagan allowed then by standing tall and strong on what was right was opening the door for success of a real conservative agenda that the nation needed at the time four years later. That is exactly want it is that we're going to need in a few years here.

HANNITY: You know, Republicans now praised Reagan, but at the time they didn't like his boldness. And it seems to me --and tell me if I'm wrong, I keep getting my sources on the ground, if you will -- there's been a contentious lunch that took place today among the Senate, Republicans and contentious little battles, including by the way, Senator John McCain, who you ran with. And it seems to me that there is a little bit of jealousy and anger that this freshman is daring to take on the establishment. But I think it's almost like he's calling them to task because they ran on this promise. Do you see any other way they can accomplish repealing ObamaCare but this way? Because I don't.

PALIN: No, of course not. You have to take whatever tool you have in your tool box in order to get rid of ObamaCare. The only tool that we have at this point is un-funding it. That is the role of the legislative branch, is holding the purse strings.

As for Ted Cruz, personally, he is a tough Texan, he can handle this. Remember that people throw rocks at things that shine, and Ted Cruz is shining. And it is not just him personally, individually, what it is that he, as a person represents. It is his beliefs, his ideals, his love of country, and of again, not wanting to see us destroyed under something like ObamaCare that the IRS was going to continue to cram down our throats.

HANNITY: All right, Governor, great to hear from you tonight. Good to see you again, we've missed you. It has been a while since you have been on. Thank you for being here.

PALIN: Thank you, keep up the great work.