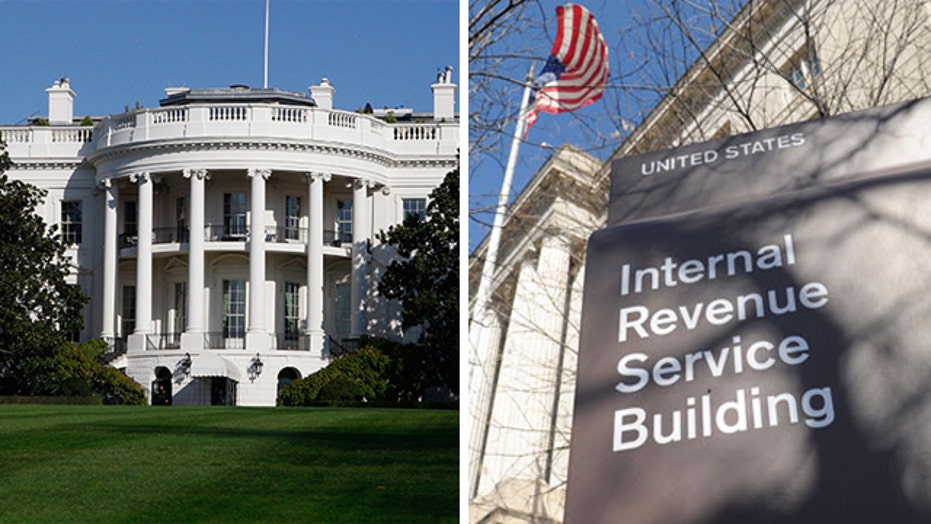 White House threatens to veto bill that would rein in IRS

New battle brews inside the Beltway

RICK UNGAR: I don't think that's really what these regulations are about. Look, if you want to accomplish a 5054C status, which means you don't have to disclose who your donors are, I don't think it's inappropriate that we should know if you're meeting the rules of a 501C4. Anybody is welcome to give money to a political group. Political groups are not being squelched in any way. The difference is will the donors be disclosed. I don't know about you, but I think that's a pretty good idea.

MIKE TAMNY: I like the idea of reining in the IRS, but I almost think it misses the point. The IRS is corrupt because it administers a tax code that has been corrupted by Congress. If you buy a Prius you're good, if you have kids you're good, if you're a nonprofit you're good. The problem is that the IRS is overseeing the tax code. If you want to fix this, you've got to scrap the tax code. There's no reason the IRS should know who's funding certain groups. There's no reason the IRS should know how much money I make on an annual basis. Fix the tax code, you fix the IRS. There's no other way to do it.

RICH KARLGAARD: It's ironic that Rick sites these 501C4 rules which allow you to spend up to 49 percent of your money that you raise on political activities and no limits on the time you spend on these political activities, and now the IRS is negotiating with conservative groups to limit the money to 40 percent, and to limit the time. So they're making up the rules on the fly. Rick, you can't site the rules and then support the IRS flouting those rules.

ELIZABETH MACDONALD: I can't imagine why this white house would want to be equated or put itself anywhere near what the Nixon administration did, even what the Kennedy administration did. This is about silencing the opposition. This is putting a chill on free speech, and it's about non-partisan activities, too, by nonprofits for voter education. Wow. If you force them to disclose donors, then make the President disclose all of his internet donors and all of his donors he will not disclose who donate massive amounts to his campaign. The IRS is engaging and is being forced to engage in political favoritism. It is wrong, it is fatally naive to think that we can sit here with an IRS that's a tax collector being dragged into political policy and fights. We've seen them put there before decades ago. It's happening again.

MIKE OZANIAN: What's happening here is the Obama administration is using the IRS to data mine. They're going through all of these forums and they're picking out specific things that are in common to conservative groups, opponents to the Obama administration, then trying to pose those as the kind of things that will not get tax-free status. That's exactly what they're doing. And the shame of all this is all this time is being wasted that could have been used to put forth pro-growth tax reform that can get us out of this lousy economy.

MIKE OZANIAN: David, class warfare is bad for the country, period. History has shown that politicians that took the electorate against each other can use that sometimes to get elected in the short term but in the long term, it's bad for the country. Look at the $45 trillion in unfunded liability that has become because of the promises politicians made to pit various classes against one another. It is very, very bad for the economy.

BILL BALDWIN: Perhaps. But I don't blame politicians for fomenting anti-Capitalistic attitudes and class envy. I blame the people who get to our impressionable citizens at a younger age and school teachers. My younger daughter came home from fifth grade with an assignment to list five ways that John D. Rockefeller was evil. The fact that he made a commodity more affordable to the middle class was irrelevant. He was in the 1 percent so he had to be evil.

STEVE FORBES: Yes, it does. Especially when you target individuals or target groups like the Tea Party and then ignore other groups. The real scandal here, Dave, is why the mainstream media hasn't been all over this and create a culture where you police these people and step over the line and you are going to get called for it. Instead the president, community organizer, needs to charge. He knows nothing but conflict.

RICH KARLGAARD: Well, sure. We have a president who is sneeringly using the phrase 'billionaires and millionaires' to describe people who work hard and achieve a lot. But you know, this has a lot of bad actors: unions that have been egging the Google bust that goes from San Francisco to Google headquarters and even some of the accomplished rich people are fanning the flames. Tom Perkins of venture capitalist went way over the top when he compared some of this complaint against the 1 percent to the treatment of Jews and Nazi Germany. That really fanned the flames and probably led to the most recent graffiti incident.

RICK UNGAR: Look, let's review what's really happening here. I have great sympathy for the people of that neighborhood. It's a terrible thing. There is always going to be vandals. This is what happens when there is a public discussion about something. There has been a public discussion. Look, you have to ask yourself the question -- if we are covering this, where were we when political statements made against gay people, which resulted in lots of graffiti in West Hollywood, California, where were we -- why didn't we cover that story?

SABRINA SCHAEFFER: That's right. One of the most disheartening parts of the Democratic Party today is that they do pit Americans against each other. Women against men, Wealthy against poor. Young against old, rich against poor. I think that's one of the things if we want to have a larger conversation is to talk about what is bigotry. It is not contained to mean the discriminating for their race or sexual orientation. It is literally the discrimination against any group. In this case, Democrats and progressive groups have really targeted hose who have worked hard and who have been successful and I just got a tweet right before we taped this show from one of our followers who showed me a white privileged conference. These are academics pushing back against anything that sets white people apart, and they are pointing to wealth.

STEVE FORBES: A little bit but not enough. It's like saying Vladimir Putin is a Jeffersonian Democrat because he's pardoned Pussy Riot. In this case, the real question why did it take them so long to wake up to the fact that there is a huge audience for family films and religious films? Evangelical Christian made "Amazing Grace" several years ago. There has been a huge market. They are finally waking up to it.

RICK UNGAR: First of all, I hear the film is great. Secondly, doesn't this just go to prove what I have been saying to you all for a very long time? Hollywood has one ideology -- make money. They made the film because they believe that it is going to make money. That's what Hollywood cares about. I'm really glad to see the PACs are giving more to Republicans so we can put this stuff to rest once and for all.

ELIZABETH MACDONALD: Yeah. He has been. You know, I think Jesus is nonpartisan by the way. Anyway, I don't know if it is -- if this means they are going to the right and I'm afraid they will turn the movie Noah into a movie about global warming or Ben Hur into a movie about income inequality or 'Going My Way' becomes Bill Clinton's life story all of a sudden.

SABRINA SCHAEFFER: They may be. You know, I say forget making a movie about religion. They should make a movie about piracy. That's where Hollywood has a big problem. They see eye to eye with conservatives. They respect private property, intellectual or otherwise. They realize it is critical to the economic growth, and I think there's a lot of common ground. That's a good thing between Hollywood and conservatives.

BILL BALDWIN: Yeah, but the philosophy is totally different. I don't think they're going right wing. In the movies, businessmen have always made convenient villains. It was true in "Chinatown." It was true in that oil flick "There Will Be Blood." And it's true with Raymond Tusk and "House of Cards." It hasn't changed at all.