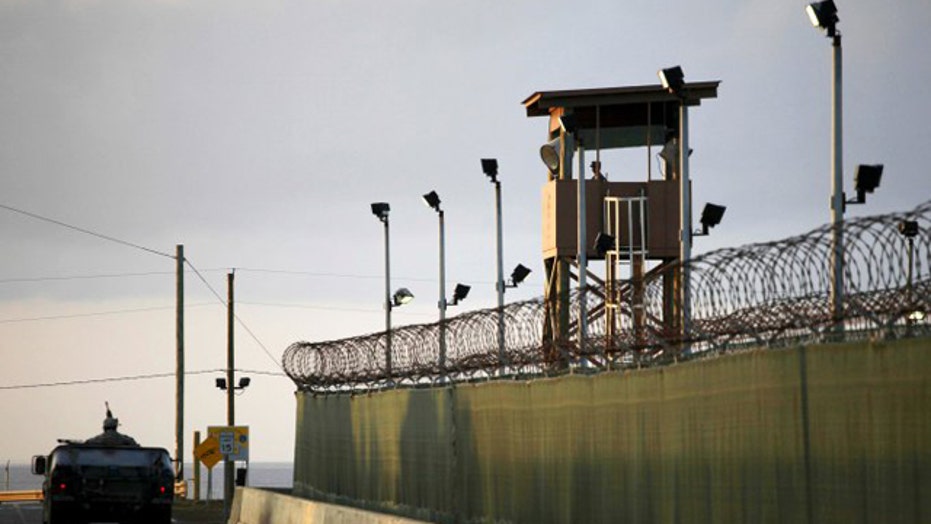 John Layfield: You look at the call to what happened if these guys go back to the battlefield. We had prison in southern Iraq. Once that was closed and those guys were released, that created the leadership of isis. We have about 122 guys right now in Guantanamo bay. About 54 considered low risk. You say there's only 68 what can 68 do? What did those prisoners do that left camp boka in southern Iraq? It is costing economies a lot of money. Don't tell me they've been down there, think are out of touch. Nelson Mandela was in prison 27 years. For the good of the world, made an incredible impact once he got out. These guys in prison like this, they can go right back into leadership roles. We've seen it before. I don't know why the president wants so badly to shut Guantanamo so bad they will go back to the battlefield.

Jonas Max Ferris : I can't imagine today when I can track everything from my phone that we can't track these people if they are released. Besides that, it's very un-American to put someone in prison forever. If there is such a danger with a host indefinitely for $2.7 Million per person as taxpayers, they should be killed. If they are that much of a threat, why alive this far? They should be executed as prisoners of war or let go. This prison for life is the most un-American of all the scenarios.

Tracy Byrnes : Forget un-American, they are terrorists. Senator Tom Cotton said it best, if they can't rot in hell, let them rot in Gitmo. We need to interrogate these people. That's where we can do it properly. Forget un-American. There is nothing un-American about housing these evil, evil people. They're evil. They are evil.

Nomi Konst: That is what we stand for as a country. We are not Jordan. We are not Saudi Arabia. We have a court of law. We have standards we live by. We have laws and procedures. We release them out in the world and let them go back to the countries and organize on their own? It doesn't. We find an ally who can house them.

Gary B Smith: This is going to cost us money. I'm going to go back to the great Ronald Reagan. It was handed down probably since the Roman Empire, but it sticks in my mind. That is peace through strength. I'm not enamored with Gitmo the location. It is expensive. I am enamored with Gitmo the philosophy, if you will. Obama doesn't like Gitmo basically because he said it emboldens our enemies. He thinks we have more to fear from having it. I think that is B.S. I think prisoners fear Gitmo as they should. Keeping them there, even if locking them away at Gitmo or any other place for an eternity is the right thing to do. I think it shows we will not tolerate our enemy combatants, whether they come from here or overseas or wherever. I think john is right. We need to take a firm stance. How does that help the economy? Because a peaceful economy where we are not threatened with terrorists, we are willing to show an iron fist makes for a safe economy. That helps us. Not this piddling millions of dollars we spend on Gitmo. That's pocket change.

Gary B Smith: Absolutely not. When did it go from global warming to climate change? Isn't climate change something we have every single day? It's a little hotter, cooler, it snows? It's not so much the science. It's the science of predictions. I went back through some of the predictions that scientists climatologists. They predicted an ice age in 1999 glaciers would be gone. In 2007 global warming would cause fewer hurricanes. In 2012 they said global warming will cause more hurricanes. So the science, if you will, is all over that. You only need to do one thing like Woodward and Bernstein, follow the money. In 1992, we spent as a country, $1 billion on climate change, research, clean energy, all that stuff. Now we are spending over $21 billion. Scientists are like anyone else, Brenda. If they can make a case, whether it's fudging the numbers or making these silly predictions so they can get funded.

Nomi Konst: You are entirely wrong. The global humanitarian forum in 2009 predicted, and this is true, that we would lose $125 billion per year, 300,000 deaths per year globally because of climate change. 99.97 percent Of scientists around the world except for a few outliers disagree with you. This is not an argument any more. This is not a debate. We have record temperatures, record highs. We have tornado alley has never seen so many tornados.

Tracey Byrnes: Temperatures are cyclical. Ask any weather person. First they are warm, then cold for a little bit. This has been happening through the test of time. Greenpeace said my kids would never see snow. Ha! My kids wish they were right.

Jonas Max Ferris: Let's pretend 1/3 of the scientists are totally made up of green scientists. In Miami Beach they've been doing the road because the sea level is higher than 30 years ago. It is sinking under water and they have to spend millions of dollars to fix it. The whole city is going under water. That is in front of me. That has nothing to do with the temperatures. We have to start worrying about how to fix our coastal cities. It doesn't matter who is causing it. You are never going to get other countries like china. We might come up with the expensive, technological solution to make our city so they won't go under water.

John Layfield: I am for doing something for the common good. This is a big deal because the far left would give so much money to the democrats. They don't have a plan. All they want to do is punish fossil fuels instead of figuring out a way to bridge the future. I am for taking the co2 emissions out of the air as much as we can. There is no plan here. The only plan is let's go after coal and fossil fuels. What is your alternative? They don't have one.

Tracy Byrnes : I fill my car up twice a week and I don't feel a dollar richer because everything else has gone up around me, ground beef, coffee, oranges. Even the rec fees for your kids to play sports. All that has continued to go up. People charge their way through the holidays. Let's call a spade a spade here. I've got bills coming in. That's where that money is going. It's not going on a big shopping spree to help the economy.

Gary B Smith: The left is always like any little blip, don't worry about it. It will get better. We've been saying about this economy since Obama took office. I agree with Tracy. You know why people aren't spending? They are scared. My god, I have a little extra money in the pocket. I want to save it because I think there are rain clouds out there? People are looking at their wages going, my gosh for the last ten years I've seen no increase.

Jonas Max Ferris : They don't believe in the oil dividend yet. If you survey people and said is gas going to go above $3? They would say yes. There is a bubble in commodities. When they realize it, they will spend the money.

John Layfield: I think people are still scared. I think it's going to come. The last jobs number was good.

MAY BE WATCHING YOU!