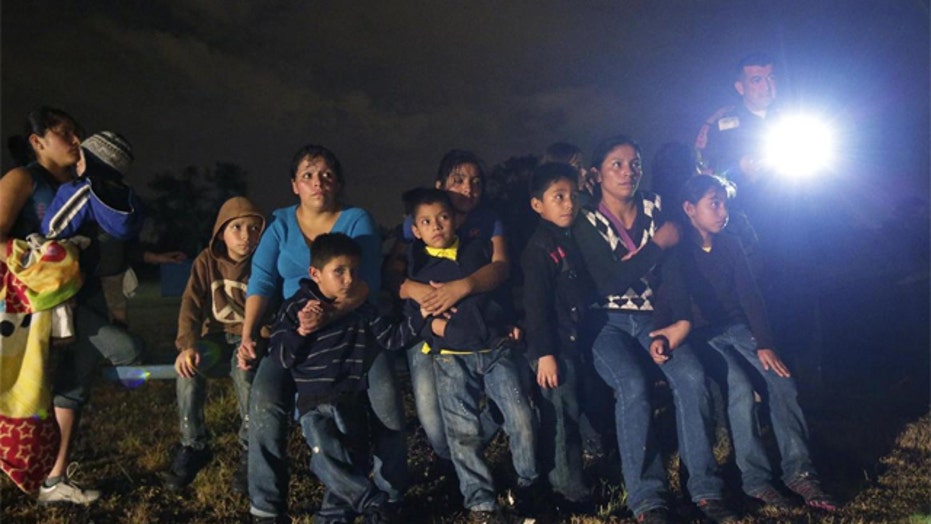 Citing privacy concerns, administration refusing to reveal where thousands of illegal immigrants are being housed

MICHELLE FIELDS: We have the NSA spying on us every single day, so I love that this administration is basically saying that illegal immigrants have more privacy rights than us. We are spending up to $1,000 every single day for these young illegal immigrants. If we're spending all of this money, we absolutely should know what's going on. The question that nobody is asking is "what about the children here in America?" We have 16M children here living in poverty. 6.8M living in extreme poverty here in America. What about them? What about the kids in Detroit, in Chicago? 59 percent of Americans say they want these illegal kids sent back, and they're absolutely right. Let's focus on what's happening here in America.

JONATHAN HOENIG: All individuals have the same rights. A right is a right to an action; it's not a right to a freebee from someone else. That's what's getting so many Americans so upset here. Not so much that immigrants, illegal or otherwise, are moving in-but that they're paying for it. That's the point here. This whole uproar is not about immigration. It's really about money. No one gets free food, free housing, free education in a free society, in a capitalist society. So this whole uproar over immigration is really about the entitlement system. If you say each illegal is costing us $1000, fine. Make them legal, then they won't cost us a dime.

WAYNE ROGERS: You start with the term "illegal". How can you start with a term that says "illegal aliens" and then talk about rights that are superior to us, who are not illegal, who are legal people who have come to this country and gone through the legal process of becoming citizens? How can you have these illegals supersede rights of people who are here legitimately? It's outrageous, it's dumb, it's stupid and everybody who supports it-including that guy at the White House-should suffer for it.

JUAN WILLIAMS: It seems to me you guys are inviting a dangerous situation. We know that there are people who have strong feelings about this issue. People who have embarrassed themselves, attacking a YMCA bus thinking it was a bus of illegal children; it was a bus of American kids. Why would any government agency potentially create a dangerous situation? One that is untenable. And secondly, we should look out for those kids. I think we should look out for any kids who are fleeing the kind of violence, political instability...

JONATHAN HOENIG: Our elected officials have been preaching socialism, preaching collectivism for decades now. I think what's frustrating is a lot of young people don't even know what socialism or capitalism is. Socialism means that your life doesn't matter. The state owns you. You have no individual rights. You have no right to pursue your own interests. Capitalism, which I would think a lot of people would embrace, means your life belongs to you. Pursuing your happiness is your goal. I think that point is lost on them. Not surprising given the state of today's public schools.

MICHELLE FIELDS: I think the reason why they embrace socialism is because they've gone from the campus classroom where they're being indoctrinated by leftist professors, to now living in their mom's basement where they're unemployed. Research shows that when young people start getting jobs and paycheck they become more economically conservative. But under this Obama economy they're not working. They want those handouts. They like socialism. I bet you once the economy gets better and they get paychecks, they're not going to like Uncle Sam taking that money out.

JUAN WILLIAMS: My son is a capitalist all the way, but let me say, when you look back at those numbers what you see is that most of these Millennials can't define socialism. When they can define it as government ownership, then their number is about the same as everybody else's. I think a lot of these young people want economic mobility. That's what Raafi, my very republican, conservative son wants. Let me tell you, when they hear about "too big to fail" on Wall St, when they hear about crony capitalism they think capitalism is limiting them and not letting people rise to the top, but protecting the rich.

WAYNE ROGERS: The biggest problem is one that Jonathan eluded to-the educational system. They have no idea what a free market economy really means and where it came from, how it originated, what made this country the greatest country in the world that it is today because of the free market system. We have so many examples of socialism around the world that have failed. They don't understand it. They don't read, they don't know history-we're talking morons here, that's the problem.

MICHELLE FIELDS: What bothers me is the media destroyed Mitt Romney for being rich, yet Hillary Clinton makes almost $3,000 a minute to talk to poor college kids who have a 15 percent unemployment rate. 23 percent of them are living at home with their parents. She doesn't care about them. Hillary Clinton's daughter, Chelsea Clinton, makes $75,000 per speech. They don't care. They act like they're populist-they're the Kardashians of politics. They're all just in it for the money.

WAYNE ROGERS: She's just exercising the free market. By the way, they're paying her. Juan and I will do the same thing. Juan and I will come and give you a debate for half that price. Juan, I'm being your agent, I hope you don't mind. We'll do it for half price. You get some humor and jokes in there for half the price.

JUAN WILLIAMS: I have to tell you, Wayne's right, it's the free market. No one is twisting their arm. They want this celebrity.

JONATHAN HOENIG: I have to say, I think there's a little bit of a difference. It is a free market, Juan, but it's not like Hillary has ever produced anything in the free market. This isn't Steve Jobs or Bill Gates coming, that have actually created anything. Hillary Clinton's whole reason for existence, the reason she's about to collect that $275,000 per speech is because of her political notoriety. She's not a creator, she's a power luster.