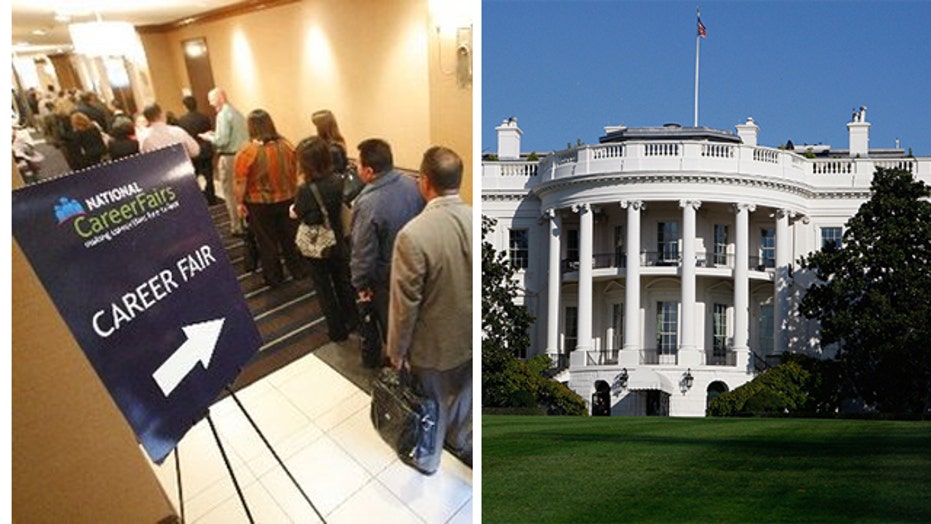 852,000 Americans gave up looking for work in September

IN FOCUS: Are business startups suffering because of DC's policies?

STEVE FORBES: To coin a phrase, policy stupid especially massive unending regulation, healthcare everywhere else crushing small businesses which is why you don't see those startups, throw in taxation, an unstable dollar, banks not willing to lend because of regulation, it's a perfect storm of non job creation.

RICK UNGAR: We have a tendency to overestimate entirely what both the executive and legislative branch can do. When you are looking at a recession that is more comparable to the great depression than any other recessions we have had since. If you want to look at policy and how it might affect it, there is just no getting around the fact that if you want to deal with jobs, you put job bills and infrastructure bills into the hopper and we all know the republicans have not a good job of making that happen. I will give Obama some blame though. Had it had been me; I would have traded the XL pipeline for a big infrastructure.

ELIZABETH MACDONALD: It has become more difficult to start a business under this administration. 106 new regulations costing $100M a year, that's a lot to put on the backs of small businesses. In this country, the net new jobs come from startups and have been getting pummeled. You see the trend. Health reform is coming up in the jobless numbers, it's unequivocal. Around 140,000 jobs a month created when it was 200,000 a month created earlier in the year. This is not the immaculate recovery that the administration has touting.

MORGAN BRENNAN: We've heard that term the 49ers, small businesses don't want to hire that 50th worker because they don't want to deal with the Obamacare mandate. There is a longer term trend here if you stretch it out to 30 years. We are seeing small business creation decline. It peaked under Reagan and has been declining ever since. There are also certain jobs that we have shortages of workers for; we are starting to see structural unemployment take shape. We are seeing this with construction and tech sector.

JOHN TAMNY: Washington is at fault. Slow economic growth is wholly unnatural and is always a function of government error. Obamacare and unemployment benefits make it more expensive to hire. Hire capital gains rates on investments make it more expensive to invest. A cheap dollar drives away investors because they don't want to commit capital that will come back devalued. We have a slow economy and it's a function of a government getting away from it. This notion that government can create jobs bills and creates jobs is nonsense. Government has no resources to do that; they only subtract from our ability to grow.

MIKE OZANIAN: When you throw in the taxes from Obamacare and look at the upper tax rate and income its 44 percent. That's a new high going back from Reagan through Clinton. I'm that I find interesting is if you look at 1980-2000, two thirds of the jobs created in this country came from small businesses. Typically if you look at history, the worst of the economy, more severe than the recession and depression, the more robust the recovery we had but contrary we have people leaving the labor market so that if the labor participation rate was the same today as it was in 2009 the unemployment rate would still be 10 percent.

SABRINA SCHAEFFER: President Obama, the Democratic Party and Hollywood share in the blame for this. Russell Brand, worth more than $15M isn't saying anything that we have not heard in congress. The convention last year was 3 days of pitting Americans against one another last year, rich vs. poor, Wall St. vs. Main Street. This is an ideology of that believes in creating an entire country that is dependent on government. The only way to do that is to demonize those profit makers and to make people want to run into the arms of the state. It is moral relativism at its worst and is very upsetting.

RICK UNGAR: These younger people aren't stupid, I think where they are finding shame is like when you take places like Wal-Mart taking in $14B a year and only paying workers $8 an hour.

MIKE OZANIAN: I think what he is saying is that he is part of the Obama administration. I don't think young people have bought into this; maybe their spirits are dormant at the moment given the current state of the economy & this administration. The war on wealth and success from the administration is similar to what was happening in the 1930s with FDR except substitute JPMorgan for Mellon, substitute what's happening right now with higher taxes with the same thing that FDR did. The parallels are the same which is why both economies are terrible.

ELIZABETH MACDONALD: It seems like the stigma is lost but I think that poor people are still ashamed about it. Young people are upset about it. I think Russell brand was trying out his new comedy routine. When you have a bad economy where people think having a full time job is at Wal-Mart. That's bad.

STEVE FORBES: It's part of the administration's strategy to get as many people on the government dole as possible but once the economy starts to get back on track, you'll see a lot of those people go back in the work force. When there is opportunity, most young people will take it.

JOHN TAMNY: I think conservatives give Obama way too much credit in saying that he alone can change the culture and make us a culture of takers. Yes, in modern times maybe it is less embarrassing to take food stamps. People don't like that. They don't like sitting at home and taking meager government handouts, they'd much rather have jobs. Economic growth is so easy and once we turn around these bad economic policies, you'll see a lot of takers become producers and will forget all of this.

SABRINA SCHAEFFER: This is crazy. I am the executive director of an organization with a virtual office. It comes with challenges and benefits. The fact is I don't know where everyone is at this moment, but I know who is productive on my staff and no amount of spyware or technology is going to give me a good workforce, you have to find good people. Whether you work from home or an office, you need to need to have trust between the employer and the employee otherwise you are asking for an unhappy workplace.

JOHN TAMNY: I personally don't like this but that's the beauty in the free market in that it protects me from it. Free market means that different companies will compete for my talents so I don't have to choose a company that would spy in this way. It's dangerous to say companies can't do this.

RICK UNGAR: This is so far beyond the pale. You don't need to spy on people, you judge peoples work based on the results that they get. If someone has lunch somewhere and gets their job done and does it well, what do you need to know where they are? It's wrong.

MORGAN BRENNAN: The idea that our behaviors and activities are not already being monitored to a certain extent is naive. When you look at the legal precedents that have been set around companies monitoring computers, company cars, phones they are allowed to do this. The bigger issue here is the procedure on disclosure. Productivity improves from those who know they are being watched.

STEVE FORBES: No because we believe in copy and sales. If you deliver your copy, great, if you sell the ads, great, I don't care how you do it, as long as the money is coming in. If you take company property, you have to expect there are conditions. Other than shipping like trucking, where you want to make sure they aren't hijacking or doing something else, you don't need this stuff.