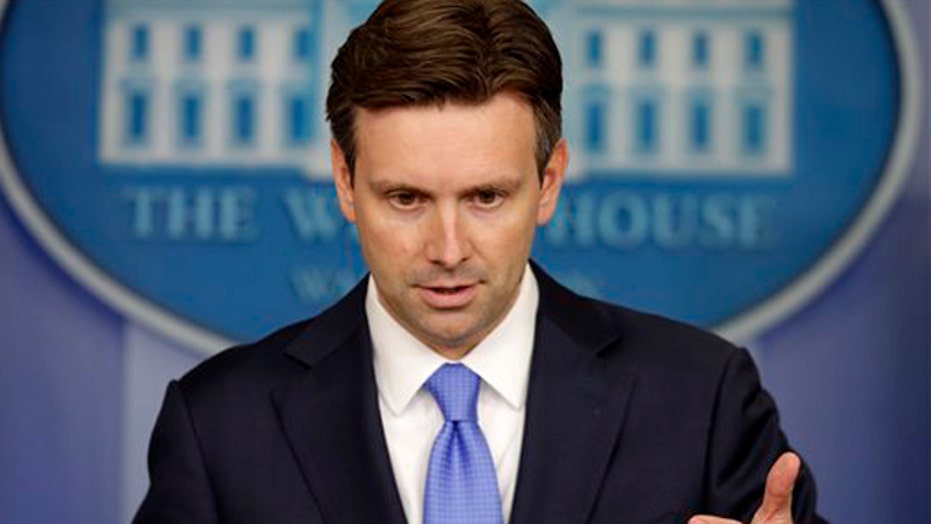 This is a rush transcript from "Hannity," August 26, 2014. This copy may not be in its final form and may be updated.

SEAN HANNITY, HOST: Back in January, President Obama naively compared the ISIS terror network to a JV team, telling The New Yorker, quote, "The analogy we used around here sometimes, and I think it's accurate, that is if a JV team puts on Lakers uniforms, that does not make them Kobe Bryant."

But in the wake of the beheading of U.S. journalist James Foley, the terror group's attacks in both Iraq and Syria and its video threats to the U.S. -- well, President Obama is rightly getting slammed for that comment.  However, in typical White House fashion, the press secretary, propagandist Josh Ernest -- he's attempting to claim that that quote was taken out of context all in order to protect his boss. Take a look.

QUESTION: Did the president underestimate ISIS when he referred to them in an interview only a couple months ago as a JV squad?

JOSH EARNEST, WHITE HOUSE PRESS SECRETARY: I thought somebody might ask this question today, so I wanted to pull -- I wanted to pull the transcript of the interview because it's important to understand the context in which this was delivered. So the president was not singling out ISIL. He was talking about the very different threat that is posed by a range of extremists around the globe.

HANNITY: All right, Sorry, Mr. Ernest, that is the demonstrably not true. Now, President Obama was answering a question about an al Qaeda flag flying in Fallujah, which according to the ever so conservative New York Times was none other than the ISIS flag.

Here with reaction -- author, columnist Mark Steyn is with us. Mark, good to see you.

HANNITY: You know, you look at ISIS, ISIL...

STEYN: ... and were flying their flag from buildings built by Americans, paid for by American taxpayers. And the president in his characteristic way was seeking to ignore this. His view of radical Islam and the war on terror and all the rest of it is if he doesn't acknowledge it, it's not happening.

And so in this case, he chose to give this banal and I think actually rather ridiculous analogy about the JVs. If there is a JV player on the court at the moment, you know, if you ask Putin, if you ask famalas (ph), if you ask the Chinese politburo, if you ask ISIS, if you ask every rinky- dink little jihadist on the outskirts of Benghazi who the JV player on court is, they're going to have any trouble in telling you that it's President Obama, a man who's shredded American foreign policy and left al Qaeda, ISIS and its affiliates running around, gamboling across a vast swathe of territory from West Africa to Afghanistan.

STEYN: That's the JV player on the court today!

HANNITY: You mentioned that this was American-built, but it was also American blood. And we watched -- not only did he...

HANNITY: ... ignore the red line that he drew in Syria, but then he watched city after city after city in Iraq fall, where now we're at the point where ISIS has more land, more weaponry, more money, and they're more lethal than even al Qaeda! And yet in January, he was calling them the JV team!

STEYN: Yes. And essentially -- I mean, this is why they're not the JVs and why it's a stupid analogy. They've merged al Qaeda and the Taliban, so they're an ideological global terror network that also controls a sovereign state, and parts of two sovereign states, in fact. They've torn up the map of the modern Middle East as it was drawn by British and French colonial civil servants in 1922, and they've simply erased the borders when it suits them.

And they haven't taken over Afghanistan, which is basically a worthless pile of rubble by the time the Taliban took Kabul. They've taken over a developed state that had money in its bank vaults. They control oil. They control advanced weaponry not just from Syrian bases they take, where they get surface-to-air missiles, but they control state-of-the-art American weaponry! They're riding around in American tanks. They're firing American guns.

So they have more money. They have more weaponry. They have more oil wealth. And for the president a couple of months before they really got going to be sneering at them that they were just some kind of Little League team I think reveals not just his own stupidity, but the lack of any strategic clarity in the White House at all!

HANNITY: The official American position is still workplace violence, not terror. And you know all the other examples.

HANNITY: I want to play for you in 2011, CIA director John Brennan talking about the idea of a caliphate as a feckless delusion because there seems to be a disconnect between what reality is -- I want you to analyze the thinking in the White House from this vantage point, listening to this.

JOHN BRENNAN, CIA DIRECTOR: Our strategy is also shaped by a deeper understanding of al Qaeda's goals, strategies and tactics that we have gained over the last decade. I'm not talking about al Qaeda's grandiose vision of global domination through a violent Islamic caliphate. That vision is absurd, and we're not going to organize our counterterrorism policies against a feckless delusion that is never going to happen. We are not going to elevate these thugs and their murderous aspirations into something larger than they are.

HANNITY: is -- is -- here's my question. Is the idea of an Islamic caliphate -- now -- you see the land mass they've got. Is it a vision that's absurd, a feckless delusion that won't happen? Is it elevating these thugs to engage them in the war that they're engaging us in?

STEYN: No. It's been going their way in failed state after failed state now for six years. And Brennan there is making the classic administration delusion that simply standing there and prissily unleashing some faculty lounge bromide makes it so.

If you recall Obama's statement a couple of days ago, upon the decapitation of James Foley, when he said ISIS has no place in the 21st century -- well, sorry, but there are thousands and thousands of head choppers who are citizens of Western nations who've gone to Syria and Iraq to decapitate people who feel differently! And there are -- and there's -- and there are support groups of hundreds of thousands of people who are following these guys as if they're the coolest soccer team on the planet!

STEYN: And beyond that, there are millions and millions of quiescent Muslims who figure that if this is the coming tide, if this is the new wave, if this is where all the energy is in Islam, they're not going to dare to speak out about it at their local mosque!

And so to have a prissy, preening narcissist standing up and saying, Well, ISIS has no place in the 21st century, as if it's some ghastly social faux pas, like wearing white after Labor Day -- this is completely ridiculous, Sean! It's completely inadequate to what's happening!

HANNITY: Well said. I can't say it any better. Mark Steyn, good to see you. Thank you.