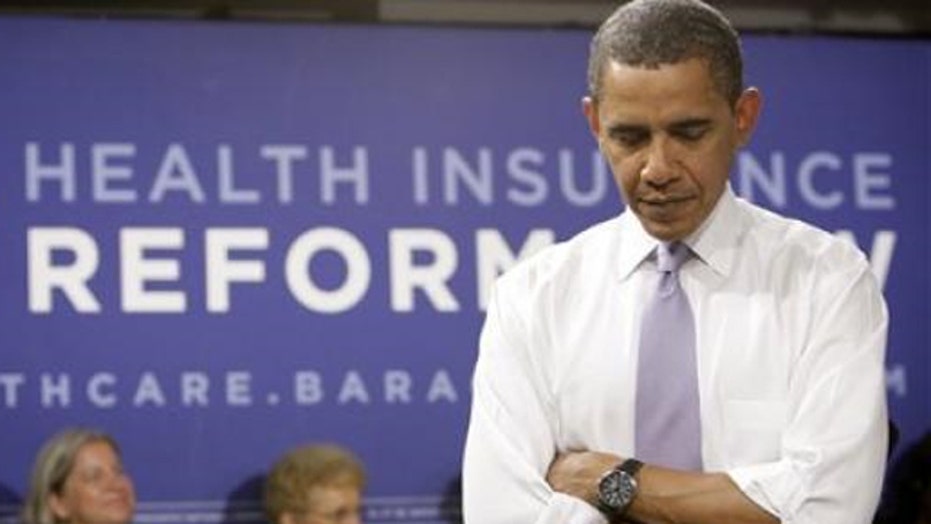 CHARLES PAYNE: All those things that those mean old Republicans warned us about seem to be coming true, including losing your doctor. Hospitals are getting kicked off these exchanges. If your doctor happened to be at one of those hospitals, you don't get to use your doctor anymore. But here's the good news; your doctor was probably substandard anyway so you'll get a better doctor.

MELISSA FRANCIS: The good news is if you have money you can pay your doctor cash. That's what it's like in New York. If there's a doctor worth his salt he isn't in one of these plans because he doesn't need the plan. So he charged up-front on your credit card.

CHARLIE GASPARINO: This is the old system times 50. Forget it. This is the crummy insurance mandated throw your rationing system we had before just exploded much wider. That's why this is so bad.

BEN STEIN: I think we're seeing that our President lied to us about every aspect of it; about the insurance companies, the doctors, the hospitals. I'm getting kind of sick of him saying that he didn't know what happened in Benghazi or he didn't know what happened in the IRS. If he didn't it know what was in his own signature legislation, his own most important document, his own most important achievement then he should not be president. If this government were a bank, it would be charged with criminal fraud for the lies that Mr. Obama has told over and over again about this health care. I want to emphasize the key thing, which is what Mr. Payne said, every single scare that the Republicans said wasn't scary enough. It turned out that it is far worse than the Republicans said.

ADAM LASHINSKY: I want to expand on what Charlie said. This is about people's access to doctors. Charlie's right. This is exactly what happened a generation ago with the whole rise of HMOs and people were outraged. They couldn't get the doctor they wanted. Why was that? Because companies were having trouble paying for their health insurance. I want to remind you that this is messy, it's ugly, and it hasn't been executed well, the President has misspoken, others have misspoken, but I don't think the President lied.

WALMART U.S. PRES AND CEO DEFENDING HIS WORKERS IN EXCLUSIVE INTERVIEW WITH NEIL

CHARLES PAYNE: Wal-Mart's created 2 million jobs in this country alone. I've seen them spring up in places where they spring up people are grateful, grateful for the jobs, grateful for the ability to buy things they couldn't before. I think it's a godsend for this country. Critics, what have they done? Who are they helping? It's amazing. We know it's a power grab, most of these people are unionist who want to take over the country that people who don't believe in capitalism to begin with. Their track record compared with Walmart is nothing.

MELISSA FRANCIS: Consumers are getting a good deal. You look at what's going on in D.C. If it's such a terrible place to work, why are 23,000 people fighting for 600 openings in new stores there? It is harder to get hired at the Walmart in Washington, D.C., than it is to get into Harvard. 5.6 percent of people who apply get in to Harvard, 2.6 percent of people applying to the for the Walmart job actually get it.

CHARLIE GASPARINO: I'm all for unions organizing. First of all, you're never going to get rich working at Walmart. Let's face it. And also this isn't exactly working in a coal mine. They're working in Walmart. It's not the most dangerous job.

BEN STEIN: I think the idea of having a food drive in which the rather low income customers for Walmart are asked to give food for the low income workers at Walmart are a humiliation. The owners of Walmart are one of the richest families in America. If the people at Walmart need money for their thanksgiving turkey, the Walton family should just give them the money. It's crazy to be asking the ordinary hardworking person in line at Walmart to give money.

ADAM LASHINSKY: Well, I'm firmly on nobody's side here. I don't criticize Walmart for being in business. I agree with Charles that they create a lot of jobs. But the critics' point was proved by this. This one store sort of proved the point, yes, in fact, our people need help. They're not making enough money. I don't think there should be a minimum, but I think its okay to advocate for more. They should be paid more.

50 YEARS LATER: FISCAL LESSONS FOR BOTH POLITICAL PARTIES FROM JFK

MELISSA FRANCIS: It really reminds you everyone is to blame in this, both parties. That spending has gotten so out of control in this country. Everyone is equal to blame, it is not a partisan issue any longer. I think of my kids so small right now, what we're doing, what we're spending, the bill will be left to them. It's immoral. It has to be brought under control. So far, so good, I still like them so I feel bad about this.

BEN STEIN: I think he was considered to be a conservative democrat, even for that era. He was not like the southern democrats, but for that era he was a fairly conservative democrat. The guy I was for in those days, Hubert Humphrey, was fiercely pro-defense and very much in favor of lowering taxes. In that era both sides were much more careful, much more conservative, and much more interested in limited in the government than they are now. The whole world has turned upside down. Everyone is a socialist now.

CHARLES PAYNE: Not only that, but appeal to the average American household at this very moment. Everybody watching the show and probably in the last few years had to clean up their own balance sheet, we all know that higher taxes means a stalled economy. Why politicians don't get that, I don't know.

CHARLIE GASPARINO: The first Reagan democrat was Kennedy. Obviously, he was not in office long enough to get the full effect of it, but that's Ronald Reagan right there.

ADAM LASHINSKY: Two things happened after Kennedy and Johnson's administration: the great society and Vietnam, they were very expensive. We'll never know how President Kennedy would have handled those two situations. He very likely would have done similar things to what Johnson did.