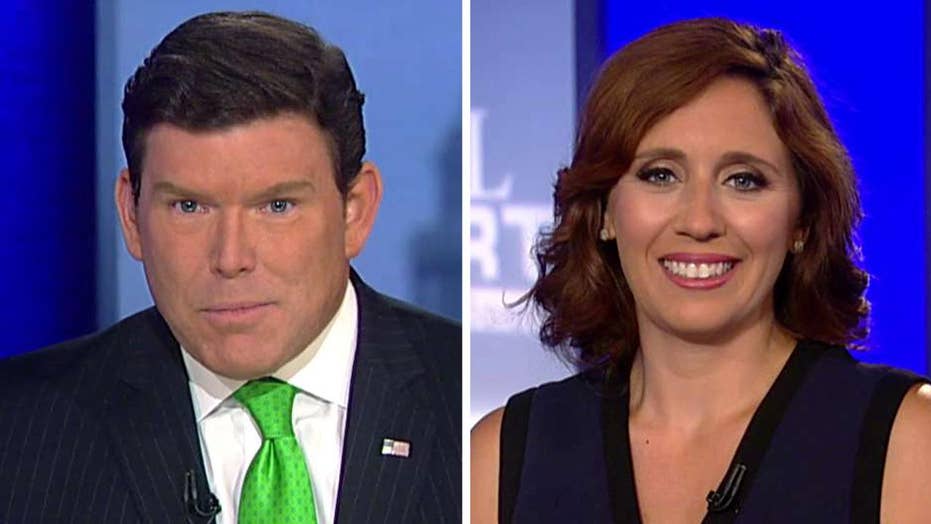 White House attempts to be proactive with theme weeks

This is a rush transcript from "Special Report with Bret Baier," July 17, 2017. This copy may not be in its final form and may be updated.

PRESIDENT DONALD TRUMP: Made in the USA. Remember the old days, they used to have made in the USA. No longer are we going to allow other countries to break the rules, steal our jobs, and drain our wealth.

We must lower the tax on business, one of the highest in the world, and we must repeal job-killing Obamacare. We have to do that.

We hope John McCain gets better very soon because we miss him. He's a crusty voice in Washington, plus we need his vote.

BRET BAIER, ANCHOR: I don't know how he takes the crusty voice. We will see, we will ask Senator McCain as he's recovering from surgery in Arizona. The question is when he will be back on that health care vote.

This as we get some new polls about the president's job approval rating, Bloomberg poll on the approval rating, approve 40 percent, disapprove, 56 percent disapprove. You can see the change from September, 2016. Monmouth out with a new poll, approval at 39 percent, 52. Interesting poll from "The Wall Street Journal." They looked at the counties that voted for Donald Trump and the approval, disapproval. And then the flip counties, these are counties that went for President Obama and flipped to President Trump in this election. And there you see the disapprove, 51-44 and the surge counties, these are ones that surged to big numbers for Donald Trump. And you can see he's holding strong mayor, 56-40.

Let's bring in our panel to look at all the elements today: Michael Crowley, senior foreign affairs correspondent for Politico; Julie Pace, White House correspondent for the Associated Press, and Matthew Continetti, editor in chief of The Washington Free Beacon.

OK, Julie, today's push was buy and sell American. How much is that getting through?

JULIE PACE, ASSOCIATED PRESS: Well, the White House is trying to make this the message. Really they've been in this position where every time they feel like they found her footing, every time they feel like they've had a positive message, something on the Russia investigation overtakes it. This is their attempt to be proactive. This is going to be a series of three weeks where they are going to be rolling out a theme.

They have done this previously, I will say. There was an infrastructure week that was much maligned because we didn't really care much about infrastructure. And I think it's important to note that every time the White House has one of these theme weeks and something is overtaken, it's often because the president himself is throwing other issues on the table. So this will be a big challenge for them, not just whether they can stay on message in the press shop and whether they can hold events every day, but whether the president can restrain himself on Twitter in particular and keep other messages from overtaking it.

BAIER: And this morning the president tweeted about the Russian meeting with Donald Trump Jr. Most politicians would have gone to a meeting like the one Don Jr. attended in order to get info on an opponent. That's politics. Some Republicans are having a problem with it. Here's John Sununu on "America's Newsroom."

BAIER: Michael, you look at those polls, and of course Trump supporters may say polls didn't work in the election, why do they work now? But I found those counties really interesting, the flip counties, the surge counties. There is still strong support for the president even this environment where he is under siege.

MICHAEL CROWLEY, POLITICO: Yes. You can't say his poll numbers are good. His poll numbers are pretty bad. But you might have expected them by now to be worse. They really could be a lot worse. George W. Bush in his second term bottomed out at 25 percent. Trump has not -- I haven't seen a single poll where he's broken into the 20s. Bush's second term average was about 37 percent. So that's about where Trump is. In some of these polls Trump is above that.

CROWLEY: Bush had a war where it was terrible. Every day we were seeing stories about more Americans soldiers killed. This was after Katrina. So real -- people were dying under the man's watch. And so Trump is faring better than that. And it just goes to show this country is extremely divided. Some other polling I saw today, Bret, shows that only a very small number of Republicans believe that Russia even interfered in the election. I think increasingly Republicans are thinking that the entire Russia story is bogus. And I think that is really redounding to his benefit and keeping them from plunging down to those rock-bottom George W. Bush numbers.

BAIER: I think we have Senator Tom Cotton on Donald Trump and Russia and this whole investigation. Take a listen.

SEN. TOM COTTON, R-ARK.: I would dispute the premise of the question that the Trump administration has somehow been soft on Russia. If anything the Trump administration has been much tougher on Russia. Was it naivete when Hillary Clinton pressed the reset button with Sergey Lavrov six months after Russia invaded Georgia? Was it appalling naivete and weakness when Barack Obama directed our ambassador in Ukraine that their country was being invaded, to tell the government of the country to do nothing provocative to stop the Russians?

BAIER: So, Matthew, the defense there is that they are doing tough stuff on Russia.

MATTHEW CONTINETTI, WASHINGTON FREE BEACON: Senator Cotton is saying that actions speak louder than words, and I think he has a point. Other than the president's rhetoric and friendly tweets, when you get to the actual details of foreign policy, nothing has been done yet in order to really appease Vladimir Putin's government.

Going back to the poll, though, I'd say the key number with the flip counties. This is what made Donald Trump president. These are the Trump Democrats, the Trump independents. And the number, 40 percent number, has been stable for about two months. What happened two months ago? Donald Trump fired Jim Comey. And I think there you see with the Comey firing onward, he's been unable to get out of the Russia morass, and that has affected his approval among the soft Trump voters, but the people who voted for Donald Trump because he was in their view a better alternative than Hillary Clinton but still aren't sold on him in the next coming years.

BAIER: The line that it is drowning out his ability to move things, is that real?

PACE: I think that's part of what's happening here, but, look, a lot of the actual action on policy is on the Hill right now. And you have a couple of dynamics that are happening. One, you have Republicans that, separate from Trump, are just uncomfortable with the health care bill that is on the floor right now for the Senate. And that is as a policy matter, that's a concern about their own political future.

But the reality is that the president doesn't have a ton of sway with some of these members, someone like Susan Collins from Maine who has won as a moderate, someone like Dean Heller from Nevada who is staring down a tough reelection fight next year in one of the few battleground states that Hillary Clinton actually won.

What can President Trump do to sway them if he is sitting at 40 percent in his approval rating? He doesn't have a lot of juice with those members. So yes, it is drowning out his ability to get things done, but there are all these dynamics happening on the Hill to some degree he's not going to be able to control.

BAIER: The president is apparently hosting some GOP senators at the White House tonight for dinner. More of that arm-twisting, perhaps. But Michael, I'm hearing that behind the scenes a lot of big donors are putting the pressure on Republicans, saying if you don't get something across the finish line and my wallet closes up really quickly.

CROWLEY: It just must be so frustrating for congressional Republicans when they have these majorities in the House and Senate, the Senate majority is narrow, admittedly, but they have a Republican president, and they should be scoring wins. In this kind of environment, George W. Bush said some important early legislative wins, including having by this point passed a huge tax cut of more than $1 trillion, and they are at going home for recess basically empty-handed.

And I think that Julie is right that the president has limited clout on Capitol Hill, but you have to think it would be helpful for Republicans to have a unified message on the health care bill, pull up its numbers. This is not a popular piece of legislation.

I will say I did hear a counterargument from somebody who said, actually, a health care bill so complicated, so easy to attack, it might actually be better for Republicans that people are distracted and talking about something else because it prevents Democrats from punching more holes in it.

BAIER: So more time does not help, perhaps.

CROWLEY: More time may not help, but with the Russia story crowding out the attacks, maybe you are OK.

CONTINETTI: The key for Trump is his top issue, which he has a large degree of support, the economy and jobs. One reason you have to get the health care vote done is you can move on to the tax cut, which I think the terrain will be much better for this president and the Republican Congress.

BAIER: Might be still sticky to herd the cats around the one plan.

CONTINETTI: But a better political fight.

PACE: Tax reform, not exactly an easy issue to take on.

BAIER: But the whole premise, the thought about getting a W.

BAIER: We'll follow it all the way. Panel, thank you.