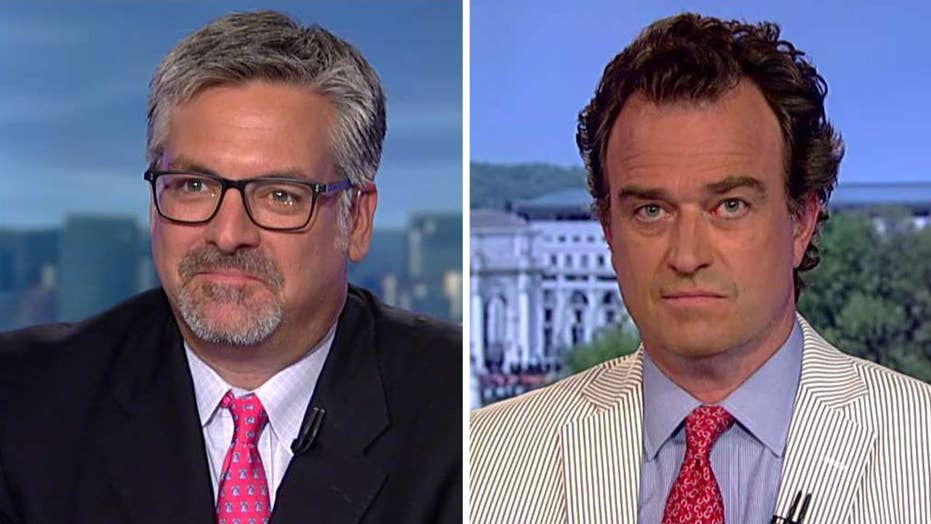 What is Trump's endgame with Sessions?

This is a rush transcript from "Special Report with Bret Baier," July 25, 2017. This copy may not be in its final form and may be updated.

PRESIDENT DONALD TRUMP: I am disappointed in the attorney general. He should not have recused himself almost immediately after he took office. And if he was going to recuse himself, he should have told me prior to taking office and I would have quite simply picked somebody else. So I think that's a bad thing not for the president, but for the presidency. I think it's unfair to the presidency.

BRET BAIER, ANCHOR: "Time will tell" from President Trump at the Rose Garden appearing at a news conference there after he tweeted today, earlier today, "Ukrainian efforts to sabotage Trump campaign quietly working to boost Clinton, so where's the investigation A.G.?" "Attorney General Sessions has taken a very weak position on Hillary Clinton crimes. Where are emails and DNC server and intel leakers? The problem is the acting head of the FBI, the person in charge of the Hillary investigation Andrew McCabe got $700,000 from Hillary for his wife," talking about Andrew McCabe's wife who got some money prior to the campaign, and we have done that story.

What about all this and where is it heading? Let's bring in our panel: Steve Hayes, editor in chief of The Weekly Standard; Olivier Knox, Yahoo! News chief Washington correspondent, and Charles Hurt, political columnist for The Washington Times. We're going to talk about the health care movement, the historic vote, it was a big day. But these comments today obviously got the most attention.

CHARLES HURT, THE WASHINGTON TIMES: You think? And who could have predicted that?

Forget loyalty to Jeff Sessions. The question that I have is what is the endgame here? If he is trying to humiliate Sessions into quitting, he's going to be left with Rod Rosenstein, and you think that the Senate is ever, even a Republican Senate is going to give him a new attorney general? I don't think that they are. So I don't really understand what the endgame here is except to just humiliate Jeff Sessions.

And I actually agree with his concerns. I understand why Jeff Sessions recused himself. I don't think you should have in this political environment. But it's very troubling as someone who wants to see Donald Trump succeed, it's very troubling. This may be the most troubling thing I have seen where he is sort of letting himself, his rage get ahead his thinking and strategizing.

BAIER: Olivier, it's been floated that Rudy Giuliani was being talked about in the West Wing. Giuliani says he has no knowledge of that and also says the recusal in his mind was the right thing to do. For Sessions, here is the president with "The Wall Street Journal." When they say he endorsed me, I went to Alabama. I had 40,000 people. He was senator from Alabama. I won the state by a lot, massive numbers, but he was senator. He looks at 40,000 people and he probably says what do I have to lose, and he endorsed me. So it's not like a great loyal thing about the endorsement, but I am very disappointed in Jeff Sessions."

I interviewed Jeff Sessions after the "Access Hollywood" came out. He was the only guy going out and doing interviews. Where do you think, covering the White House, is this is coming from?

OLIVIER KNOX, YAHOO! NEWS: The president is getting even more frustrated than he was before with a lot of the Russia investigation. The complaints that he's talking about, what he is really saying is Jeff Sessions should be the one looking into all of this, not Bob Mueller. It's very clear that that is the place of frustration.

KNOX: A whole different set of tweets by the president. In some ways that was a self-inflicted wound.

HURT: That's my point. They are not going to give him an attorney general who is going to make a decision different from the one that Sessions did.

KNOX: But it's coming from that frustration, and the frustration is more to the fact that inside the White House they view all things Russia, this whole conversation is fundamentally an effort to undermine and delegitimize the president and his victory in November. And so that's a really -- he was reacting to that on a very visceral, a very personal level, and it's giving us this unprecedented presidential buyer's remorse, if you will, when it comes to the attorney general.

BAIER: On this Russia investigation, obviously we don't know what we don't know, Steve, and where Mueller is going and what tangentially he could connect with the president or his family. But if you listened to Trey Gowdy on this show earlier, Jared Kushner, according to him, was very impressive and point by point about every element of this lack of conclusion tie with anything that he saw, and he was pretty integral to the campaign.

STEVE HAYES, THE WEEKLY STANDARD: Right. It does make you wonder what Donald Trump -- he is setting up a whole universe of things, presumably, that are taking place in the Mueller investigation that we are not privy to, the public, the journalists covering this. And it makes you wonder what is it that he is seeing, because you can't really identify a precipitating event. Jeff Sessions recused himself months ago, and this is a day after day tirade has taken up really just the last week.

BAIER: And there are some conservatives like Mark Levin and others who are out very aggressively defending Jeff Sessions.

Here is the talk about the intel, going after the leakers, but also the Hillary investigation, here is the evolution of that dating back to previous years from the debate and "60 Minutes."

THEN-PRESIDENTIAL CANDIDATE DONALD TRUMP: If I win that, I am going to instruct my attorney general to get a special prosecutor to look into your situation, because there has never been so many lies, so much deception.

UNIDENTIFIED FEMALE: I know, but a special prosecutor?

BAIER: So maybe now he does?

HURT: I think that what he is considering how much he is getting grilled himself, I think that it starts to look sort of more appealing. But I think Steve is exactly right about the fact that so many of the people that supported him, they really did support him because of those issues and every time he got into trouble during the campaign, what he did was he pivoted back to those issues, like trade and immigration, fighting terrorism. And it got him out of every single jam because he was talking about stuff that everybody was listening to and agreeing with and nobody around here was even onto it yet.

And so I wish that he would now, again, turned back to the issues. He had a tremendous victory today. Go back to health care. Even if I don't agree with what he's doing, that populist message has gotten him out of so much trouble and it could get him out of trouble this time too if he would keep beating up on Jeff Sessions.

BAIER: And we are going to turn to that big victory in just a moment. Does Sessions survive?

HURT: Honestly, it's unimaginable at this point.

HURT: Let me just add I think there's a good chance that he quits. Who wants to put up with this?

HAYES: These guys hemming and hawing with their long explanations. I will give you a straight answer -- no. He doesn't survive.

BAIER: That's a rare event, by the way, at the end of the table, a rare event. He's joking.