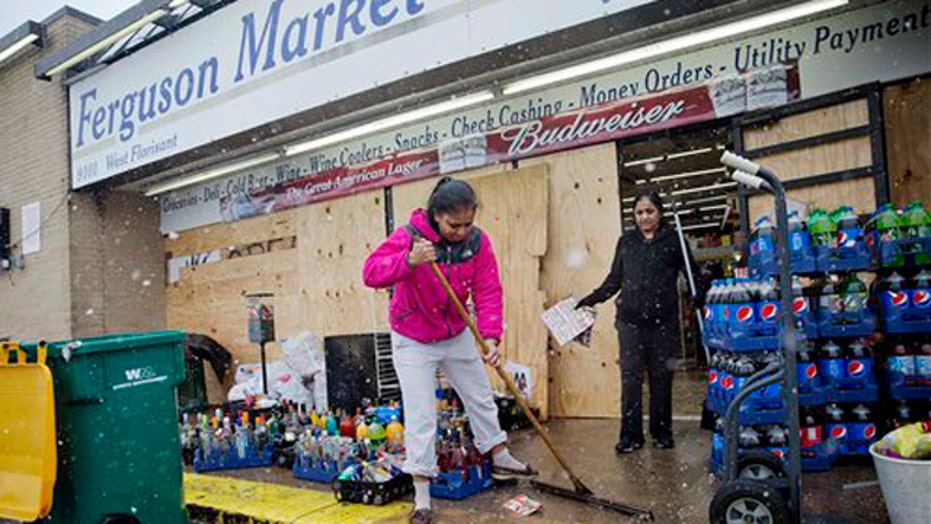 What does the future hold for Ferguson?

Victims of the riots speak out

This is a rush transcript from "Hannity," December 5, 2014. This copy may not be in its final form and may be updated.

SEAN HANNITY, HOST: And welcome to "Hannity." Tonight -- they are the forgotten victims of Ferguson, Missouri, small business owners whose stores were looted, some burned to the ground by protesters in the wake of the Michael Brown grand jury decision. But on "Hannity," we are making their voices heard tonight.

UNIDENTIFIED FEMALE: I had surveillance running on my computer and saw the whole thing.

UNIDENTIFIED FEMALE: It's hard for us to get back to where we were before.

UNIDENTIFIED MALE: We cannot use anything here.

UNIDENTIFIED FEMALE: I actually could have died.

HANNITY: Now, dozens of small businesses were left completely destroyed after protesters became violent in the wake of the Ferguson grand jury decision. Now, keep in mind some of these small business owners just finished rebuilding from the demonstrations back in August, when the Michael Brown shooting first occurred.

Now, they're victims of Ferguson, too, and unfortunately, we're the only show bringing attention to their stories. So tonight, we have brought some of them here to New York to be with us in studio.

Welcome, all of you. Thank you all for being here. And I know I speak for a lot of people -- the country watched in horror what was happening. We were live on the air as some of this was going on, and it was not a pleasant thing to see.

I want to start with, first of all, who do we -- are there people to blame here? How many of you feel that some of the people outside that came to Ferguson -- how many blame them for part of what happened? Just a show of hands. Yes? How many don't blame them?

UNIDENTIFIED MALE: (INAUDIBLE) they were all from outside or they were from neighborhood.

UNIDENTIFIED MALE: But the greatest blame, I think, should go to the governor for the last incident, where he really let us down.

HANNITY: Can you imagine that the governor -- how many blame the governor? He called up the National Guard and then he didn't send them in!  Yes?

JAY KANZLER, ATTORNEY FOR FERGUSON BUSINESSES: Right. No question.  Not only did he not send in the National Guard or protect these people, but these businesses were told repeatedly by not only the governor but by the Justice Department and others that there was a plan and that they would be protected, Don't stay behind and protect your stores, we're not going to let what happened the first time happen to you again.

And frankly, when everything started, then the 911 calls started going, there wasn't a soul down...

HANNITY: By where the businesses where.

HANNITY: I want to ask -- I'll start with this controversy. There's a controversy involving Michael Brown's stepdad. And you remember the night. He was -- I think he was standing on top of a car, David? Yes?  And he said "Burn this b down." Here's what he said.

HANNITY: He has since apologized, but this led up to what happened.  How many of you think that he should be arrested? Show of hands.

HANNITY: Bo, you -- from a law enforcement point of view, you're trying to protect a city, somebody says something like that, is that inciting a riot?

BO DIETL, FORMER NYPD DETECTIVE, FOX CONTRIBUTOR: I really feel as though he should be arrested for his actions. And from that, there was arson that occurred. Also you know, the fact, when we were talking about - - we knew leading up that there could have been problems. That National Guard could have been kept a half a mile away. That was handled horribly.

And you know what? I'd like to find out the influence of Attorney General Holder with that governor, if that was not spoke about because of the violence back when it first occurred back in the summer. Were they afraid? So obviously, they knew there could be violence again. And these poor people that own these stores, they're the victims. And I think that the government should pay them because the government knew there could have been problems.

HANNITY: It's amazing they called up the Guard. They didn't send in the Guard on the night when these business owners needed it the most.

HANNITY: I know that he apologized, but that doesn't take back what he said and what the ensuing results were, does it.

PARKS: Well, a big point here, though, there's been nothing to show that when he made that statement that anything happened as a result of the statement. Now, although he made the statement, he apologized...

HANNITY: Is it such a leap to think that...

PARKS: Well, there would have to be a nexus. For it to be criminal and him to be responsible, there must be a nexus between what he said and action that happened later, and there isn't.

HANNITY: David, when you were on the ground reporting for the show, you were there for a long time. Your thoughts.

DAVID WEBB, FOX CONTRIBUTOR: Well, I'll go back for a moment to the prosecutor's decision to use the night to release the verdict. Tactically, that was a horrendous mistake. They need to look at why that decision was made. It hampered the policemen's ability to do their job. They had no sightlines. They couldn't see behind the buildings.

Yes, inciting a riot is a crime, and Michael Brown's stepfather should be prosecuted. It spreads like a wave when he starts doing that. And what happened that night is once that combined with the gunshots, combined with the surge of outside agitators -- and unfortunately, mostly people from the St. Louis area who were arrested that night -- 60 or so of them were all from the Ferguson and St. Louis area.

These were the people that damaged these businesses, that ran past me, past the police station, and began to break out windows for half a mile all the way down to the Walgreens.

HANNITY: Later, we got the Ferguson Market, and we got the video of what happened inside of there.

All right, let me ask about outsiders that have come in. Reverend Al Sharpton -- he's commented on it. Jesse Jackson has commented on it. And Louis Farrakhan. Let me play all three of these men and get your feedback on what you think of what they -- how they might have impacted what happened here.

In order to establish peace, you must have fair justice for everyone.  We want real peace. We don't want to just be told to shut up and suffer in silence.

MINISTER LOUIS FARRAKHAN, NATION OF ISLAM: As long as they kill us and go to Wendy's and have a burger and go to sleep, they're going to keep killing us. But when we die and they die, then soon we're going to sit at a table and talk about we're tired! We want some of this earth (ph) or we'll tear this (EXPLETIVE DELETED) country up!

REV. JESSE JACKSON, RAINBOW/PUSH COALITION: (INAUDIBLE) three-and-a- half months. This was no jury of substance, no jury of integrity, no real (INAUDIBLE) this was a hangman's noose. It's not right, and we all deserve better.

HANNITY: Show of hands. How many think this had a detrimental effect on Ferguson? I know Jesse Jackson's comments were after. How many feel that this was detrimental. Most of you.

Let me go to Daryl First.

WEBB: (INAUDIBLE) for a moment.

HANNITY: Yes, go ahead. Go ahead. Sure.

WEBB: All right. Here's what happened. All these victims that are sitting here in this audience -- have any of you been contacted by Al Sharpton, by Farrakhan, by anyone who came down here and did this?  They're...

HANNITY: Have any of you?

WEBB: Have any of you been asked? They're there to shout, to stoke the fires. They didn't go back to Ferguson after the aftermath. They're not there when the police go back to eight-hour shifts, when Jeniece is looking at her burned-out building, when Mohamad and I are walking through the store, where he has broken glass, water dripping from the ceiling. You could smell the smoke. For a couple hours afterwards, I could smell it in my nose. Or the Ferguson Market, where a young pregnant woman is just trying to pick up the pieces of her life. And their employees don't -- their employees know how they're paying their bills.

These guys stoked the fires, literally, that lead to fires, and then they walk away!

HANNITY: Daryl, you wanted to weigh in.

PARKS: For sure. Without question, no one wanted the violence and the destruction to the businesses that have happened here. Now, you have to understand when you talk about civil rights and change, especially in communities that are primarily African-American, almost all of that type of change in the history of our country has always been for people who weren't from that community.

This community could have made a decision to change a long time ago, but its leaders never did anything to change the situation that existed in that community.

PARKS: So people have to come in -- let me tell you, I work in a lot of different communities every day that I don't live in, right, to bring change. And when you do that, you have to go in and push the system to be just a little bit better. That's normally been from outside...

HANNITY: What happened to your store? We're going to get to everybody's story as we go on.

MOORE: Well, first of all, I'd like to back up a little bit about when you asked about the comment about the rioting and the burning up. Me personally, I think it's a silent code in the African-American community.  And I think that...

HANNITY: A code, did you say?

MOORE: I believe, meaning that lots of people are afraid to speak out, thinking that if they speak out, that it will come back on them. Me personally, I think it was outrageous. It took everything -- my building was not burned down, but it hurt my business all the way down to zero.

Me personally, I don't care if it was Michael Brown's stepfather or whoever it was, it was wrong. And I mean, I understand we react out of anger, hurt, but when you verbally pronounce something like that, you're going to make people act out because it was already out there on edge waiting for someone to just give them an inch to go out and break out.

So me personally, I really don't care who it is. It hurt all of our lives. And it's painful. This is Christmas time, and I don't know how to tell my daughter, Hey, your dad may not be able to get you anything because my business has suffered.

So with the politicians coming in, I respect that. But first of all, where were you at before it happened?

MOORE: So I have a problem with that. I mean, if you want change, start to change way in advance. Don't wait until a problem come and then want to voice your opinion.