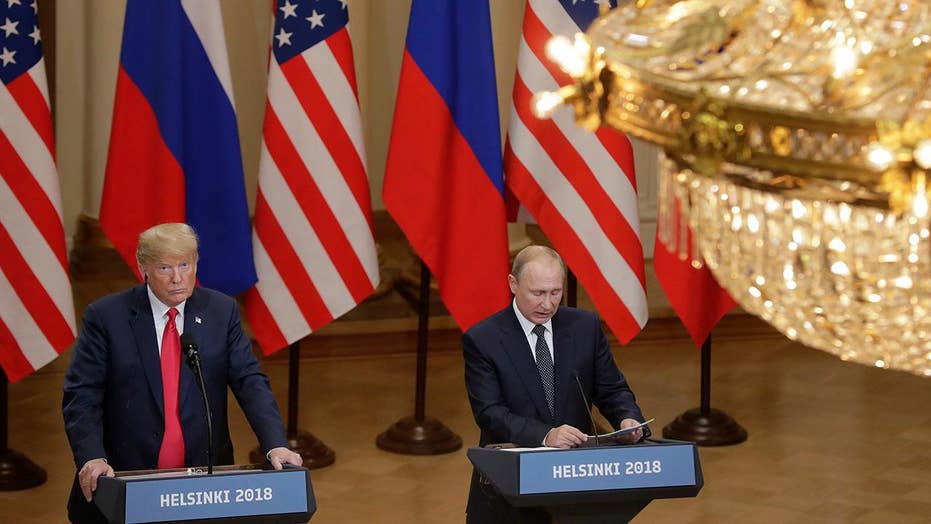 'Special Report' All-Stars on a momentous and confusing week for President Trump.

This is a rush transcript from "Special Report with Bret Baier," July 20, 2018. This copy may not be in its final form and may be updated.

PRESIDENT DONALD TRUMP: Dan Coats came to me and some others. They said they think it's Russia. I had President Putin. He just said it's not Russia. I will say this, I don't see any reason why it would be.

The sentence should have been I don't see any reason why it wouldn't be Russia.

TRUMP: Thank you very much, no.

WHITE HOUSE PRESS SECRETARY SARAH SANDERS: The president said thank you very much and was saying no to answering questions.

TRUMP: I let him know we can't have this. We're not going to have it. And that's the way it's going to be.

ANDREA MITCHELL, NBC ANCHOR: Vladimir Putin is coming to the White House in the fall.

COATS: That's going to be special.

BRET BAIER, ANCHOR: Well, that was special. One week watching from Monday to today, that's what we'll talk about this panel. Let's bring this our panel" Byron York, chief political correspondent for The Washington Examiner; A.B. Stoddard, associate editor at Real Clear Politics; and Washington Post columnist Marc Thiessen. Marc, welcome aboard to the panel.

BAIER: Your thoughts looking back at this week and where we have ended up now at the end of the week?

THIESSEN: Donald Trump's press conference and his performance was cringe-worthy, and watching him try to walk it bass was cringe-worthy as well. But if you look at his Russia policies, they are pretty good. In fact, there is a dramatic improvement over his predecessor. He expelled 60 Russian diplomats over Russia's chemical weapons attack in London. He's given $47 million to Ukraine in military aid, and just today they announced $200 million more in military aid to the Ukraine. He imposed new sanctions on Moscow for their violations of the INF treaty. He got the NATO allies to kick in billions of dollars more. He's twice bombed Assad, Putin's ally. So if Vladimir Putin was trying to gets more pro-Russia policies out of his support for Donald Trump, it kind of back fired on him.

BAIER: On Capitol Hill, A.B., the outrage was kind of really high at the beginning of the week. It kind of petered out, but then it's at a steady kind of outrage, right?

A.B. STODDARD, ASSOCIATE EDITOR, REAL CLEAR POLITICS: Well, the news of the second summit was sort of the last thing that everyone wanted to hear, and that it would be scheduled for the fall right around the timing of the midterm elections was not welcome. And so you saw a lot of like I don't want to talk about that today. I'm busy. And they are actually privately obviously trying to dissuade the White House on this topic and hope that this never happens and that they can make it go away.

STODDARD: But the point is we really need to know if there were agreements and concessions made. We know now that there is news that the president has agreed to an agreement for Syria that Netanyahu and Putin came to. It's very complicated involving who will control which troop movements by Iran and everything else. But, basically, that's all we know. And then we know that the other thing was discussed was shot down by 98-0 vote by the Senate which we all saw yesterday. We need to find out what else happened at that meeting, and that's of grave concern.

BAIER: Here is the House minority leader and the secretary of state.

HOUSE MINORITY LEADER NANCY PELOSI, D-CALIF.: What is Putin blackmailing President Trump with, personally, politically, or financially? Whatever it is, it is a level of blackmail that the American people cannot afford.

SECRETARY OF STATE MIKE POMPEO: I think those allegations are absurd. This administration has been relentless in its efforts to deter Russia from its bad behavior. We inherited a situation where Russia was running all over the United States. These last few days have been, frankly, more heat than light.

BAIER: The president tweeting earlier this afternoon, "I got severely criticized by the fake news media for being too nice to President Putin. In the old days they would call it diplomacy. If I was loud and vicious, I would have been criticized for being too tough. Remember when they said I was too tough with Chairman Kim? Hypocrites." Byron?

YORK: The Pelosi stuff is just resistance fantasizing. I think that's pretty clear, because of these hard policies that Marc was talking about. On the other hand, in handling this summit, the White House has really done a very bad job, it seems, of explaining to the American people what the president did. Other than the president saying this was really great, they haven't really explained what was accomplished.

And then, having not explained that, they come out and say let's do it again. I mean, we just had one. It appears that the president messed it up and wants a do-over. That's kind of what it looks like. So if there is a reason that they have set some process in motion that calls for another meeting in the fall, that would be fine. But we have seen a White House that has simply not explained the substantive stuff that went on at the summit.

BAIER: Now speaking of summits, the forum out in Aspen, Dan Coats, the director of national intelligence, talking about the cyberthreats specifically. Take a listen.

COATS: I'm concerned about a cyber 9/11. Let's say you shut down Wall Street for a week. What does that do to world markets and people's investments? What about an attack on the electric grid in New England in January? There are people out there playing this game of chess with us in ways that want to take us down, and we have to be better than they are.

BAIER: Now, Russia, Marc, is clearly one of them. But so is China and so is Iran.

THIESSEN: And North Korea as well. They spend millions and millions of dollars trying to infiltrate us. They brought down Sony Studios practically. So this is a major, major national security threat that we face and it has to be taken seriously. The president has got to learn to be able to separate collusion from the challenge of the cyberthreat that is coming from Russia and all those countries that you indicated.

BAIER: Do you think DNI Coats, his job is in jeopardy after kind of explaining pretty frankly his concerns?

THIESSEN: I sure hope not. I think Coats is doing a great job. Trump needs good people around him. All these people are running around with their hair on fire saying everybody should resign from the Trump administration over this press conference. He needs Mike Pompeo. He needs John Bolton. He needs Dan Coats. He needs these people around him not because he can't handle the job but because he is new to national security. He has only been president for two years. He wasn't working in this world before. And good people surround themselves with smart people and listen to them. And it seems right now that Trump needs to do that a little bit better.

BAIER: A.B., the story was that Secretary Pompeo and Vice President Pence were part of the team that said the president had to kind of clean things up on aisle five after coming back to the U.S.

STODDARD: Right. The problems arise when he doesn't listen to his experts. And Marc's right, he has very, very qualified and credentialed people, public servants of great integrity working for him, like Dan Coats. And when they come, they are often not listened to. They are often not consulted. Dan Coats did not know he was going to have these people Kislyak, the Russian ambassador, and others in the Oval Office last spring. He did not know that Putin was going to be welcome at the White House this fall. Dan Coats was hung out to dry on the world stage by the president on Monday.

And this is what happens is the president as he has grown into this job has decided he doesn't always need to consult with them. And so we are also told that it was more what he saw on television than the words of the Vice President Mike Pence and Secretary of State Mike Pompeo about turning this around that really made him come out with a clarification in an attempt to turn it around.

BAIER: Has he turned it around?

YORK: No, he hasn't turned it around.

BAIER: Has the Mike Cohen tapes turned it around?

STODDARD: That will turn it around.

YORK: We've got a new scandal to divert attention from the old scandal. As far as Coats is concerned I don't think his job is in jeopardy, but you can imagine that they are quite irritated with him. Its' like if you want to hang out with Andrea Mitchell and her friends in Aspen, go ahead. But don't expect us to be happy about it.