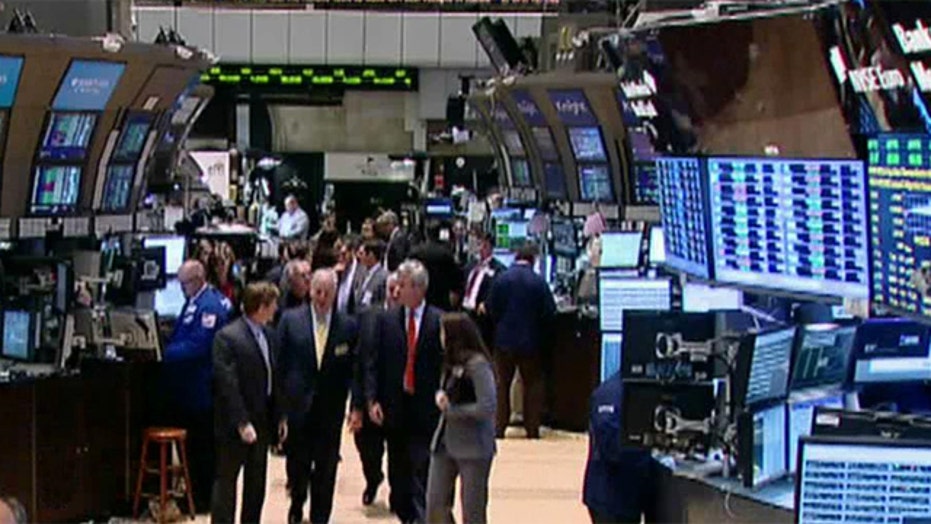 JOHN LAYFIELD: Look, you said the stocks are on fire. They have been on fire. There is obviously a disconnect. The economy, you cannot say, no one will say the last three years has been on fire. With the fed pumping money, with zero interest rates, the rich get richer, the poor get poor. We have the highest poverty rate -- more people in poverty in the history of our country. We're seeing the market take off. There is a huge disconnect between the two and that's not going to change with the lowest labor force participation rate, consumers driving 70 percent of the economy.

SUSAN OCHS: It's starting to get better. People have been eulogizing this economy for months and it's just not as bad as people are saying it is. We had a 2.5 percent GDP number for first quarter, which is not gangbusters, but it's solid. We're now averaging, over the past six months, 200,000 new jobs every month for the past six months. Again, it's not stalled out. It's not falling off a cliff. It could be better and we want it to be better. But we are seeing good strong hot spots here.

GARY B. SMITH: Is there a disconnect? Yes, there is a disconnect between reality and what Susan is saying. Look, Susan says "Oh, things are getting better, these numbers, blah blah." The one number I look at as always is the employment number. Not that 7.5 percent. The other number-- the U6 number-- that accounts for people that have just given up. That number actually went up to 13.6 percent. So if the economy is so great, you actually have less people working than you should given the population growth and everything. I think the economy is in the doll drums. I think John Layfield has it right. Listen, if you have 100 percent of your assets in the stock market, you're cheering. How many people have 100 percent of their assets in the stock market?

TOBIN SMITH: The disconnect is, no question, that the economy is not recovering. It's 50 percent less recovery than any other recovery we've had. But at the same time, in the last recoveries we had, we had inflation, we had normal interest rates. We have actually negative rates. People have to pay money to give money to the fed. When you put $85 Billion a year, you do. It's not only the American Fed, it's the Japanese, who've now said that they're going to double their inflation rate in the next two years. We have Europe. Almost every Federal Reserve is creating this money. It has to go somewhere. What's intriguing is people know that bonds are too expensive because they've been priced basically in a bubble. So now the same people who bought bonds are now buying stocks that pay dividends as a replacement for bonds. That's what's making this market go up when the economy feels so in a slump.

JONAS MAX FERRIS: It's a good enough economy. That's exactly why the market is taking off, is that we're not going to have a depression. We don't need to hide in these negative return assets, whether it be cash or short-term bonds. And this 2.5 percent GDP is-- the largest economy in the world that grows that fast other than China is America. So there is nowhere else to go. You can't just sit losing money in cash your whole life. So it's up way over 100 percent from the crash. You don't really have a choice people are deciding we're not going to lose all of it in some depression. So game is on.

REPORT: SIGNS EMPLOYERS CUTTING BACK ON BEENFITS AHEAD OF HEALTH CARE LAW ROLLOUT

TOBY SMITH: It's not a bump. It's a sink hole and if you just look at the last three months and I'll take it forward, you'll see probably 3 million jobs eliminated in the United States simply because it's not worth hiring those people at the margin. Even worse, Gary is worried about these partially employed people. When France did this, they went from the smallest to the largest amount of 49 companies in the world. United States, we're going to probably add another 3 or 400,000 companies that only have magically, 49 employees. That means they're going to lose everyone on the margin they can get rid of. This is horrible.

SUSAN OCHS: The issue here is that we have seen these kinds of things before, well before Obamacare ever existed. Remember in 2005 there was that internal memo from wal-mart specifically saying one way to save on health care costs is by cutting back workers' hours so they're no longer eligible. This has been going on for a long time. It will continue to go on regardless of what happens with Obamacare. That said, part of the whole point of the law is create these state-based markets so people can go out into the individual market and buy health insurance and they don't have to be dependent on the employer.

GARY B SMITH: Absolutely. Make them all part-time or cut back on their hours. It's a simple, the stick and the carrot. Here is the carrot. I want to save money, so I will cut back on their hours. The problem is if you are an employee at one of these companies and you've been covered by health care, I can tell you what's happening in Maryland, which is supposed to be at the forefront of this whole statewide agency kind of thing. Blue cross blue shield in Maryland has already said, we expect premiums, Gary B Smith, to go up 25 percent next year. Now, I'm already paying a heck of a lot 'cause I'm not covered by any company. Could you imagine having a family of four out there. You pay a little bit each month. Now the company cuts you off and now you have to go pay 2, 3,000, maybe $4,000 a year in coverage. It's going to hurt.

JONAS MAX FERRIS: In Susan's point, Obama just added trains to an already existing train wreck. The whole notion is everyone is acting like employer-based health care is a good system. If you want jobs in an economy, then an employer should be able to hire somebody and just have to pay them a paycheck. There shouldn't be a pension or 401(k). There shouldn't be a health care plan. That is all additional cost. It discouraged hiring. It's why you've had a multi-decade trend toward temping. It's the same ridiculous system which is you got to provide all these other things. Maybe you have to provide a car so he can get to work. You want to fix it, get people in charge of their own health care. There was some of that under the Bush administration with the health savings account. It never really went anywhere. There is some of it here with the state plans. Maybe that will work. But a you will I know is as an employer, I want to write a paycheck. I don't want to do all these other benefits.

JOHN LAYFIELD: You're going to feel it by exactly what everybody is talking about. Jonas was spot on as he usually is and with a great analogy. But Jonas was absolutely correct. Look, you have a broken system. Instead of fixing a broken system, all we did was add 30 to 50 million people to that broken system. All that does is exacerbate the fractures. We highlight a guy who owned several Denny's several months ago here. He said if I have to pay an extra 4 to $5,000 per employee, that's all the profit I made for that store. He said, I have no choice but to cut them back down to 28 hours underneath that 30 hour limit. That's what you're going to see all over America.

GARY B SMITH: Absolutely, Brenda. If you zoomed in on that video, I bet half that group, they're wearing north face jackets, Nike sneakers, carrying iPhones and are against capitalism. They need to get a job if they don't already have one. And second, if they hate capitalism so much, move to a nice socialist country like Spain where the unemployment rate is 27 percent. Let's see how long they last there.

SUSAN OCHS: Most of these demonstrations are really about workers' rights. They're not necessarily trying to take down capitalism. And the irony here is that workers and companies need each other. So there has to be sort of this happy middle ground. It's always unfortunate when they turn violent. But they are valid issues around workers' rights that we need to deal with.

JOHN LAYFIELD: This isn't about workers' rights. This is about idiots. Absolutely idiots. You need a take a Singapore cane and tan their back sides 'til skin flies off. You take a rock or fire and you try to burn somebody's business that they spent their life building. Ship these guys to Cuba, and see how they like communism. These guys are morons and don't deserve to be in this country.

JONAS MAX FERRIS: They actually have more protests in the socialized countries right now. Look, capitalism is the best way to run a country. There is just no question about it. However, it can disenfranchise people in mature states, like we are now. About two-thirds of our country is not going to see pay rates go up and it hasn't for multi decades, adjusting for inflation. It can lead to revolt and the whole system could collapse in on itself. There are solutions to keep the system going and not going like Europe where all of a sudden everyone is killed at the top, and redistribute all the money and that is progressive taxes, which we have in America and other benefits and things that keep people in what appears to be a dead end job, working and not rioting in the streets.

TOBY SMITH: I thought we were on the WWE with Layfield. But the biggest issue is how ironic is it that in the town of Gates and great entrepreneurs, you realize they would all be working if they had jobs for Boeing at this point or throwing salmon at the piked market if they didn't have entrepreneurs and capitalism. For these guys to do this, I think half of these guys are paid to do this anyway. I think this is a bogus deal all the way around.