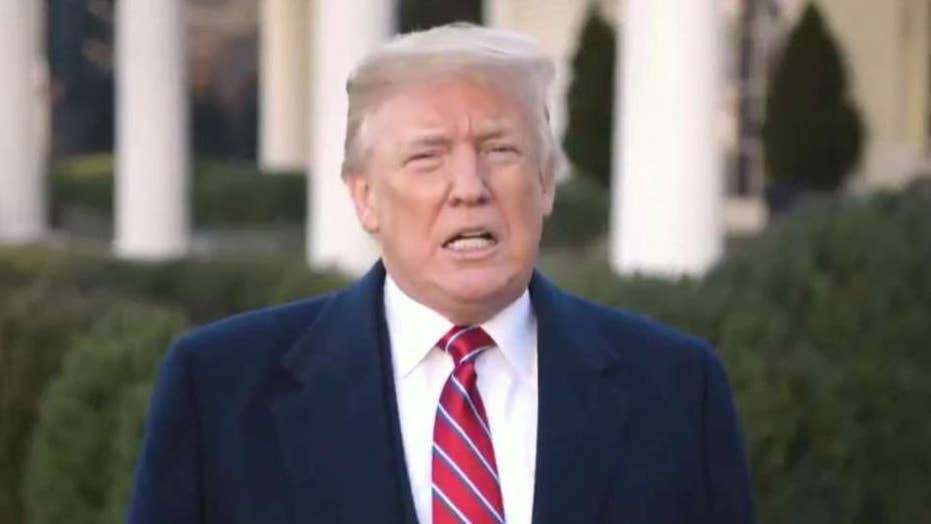 US to withdraw troops from Syria as Trump declares ISIS defeated

This is a rush transcript from "Special Report," December 19, 2019. This copy may not be in its final form and may be updated.

Up next, the panel on President Trump's intention to remove all U.S. troops from Syria, and a new tweeted out video from the president right after the break.

PRESIDENT DONALD TRUMP: Now we've won. It's time to come back. They are getting ready, you're going to see them soon. These are great American heroes. These are great heroes of the world, because they fought for us, but they have killed ISIS who hurts the world. And we are proud to have done it. And I'll tell you, they are up there looking down on us. And there is nobody happier or more proud of their families to put them in a position where they have done such good for so many people.

BAIER: President Trump in the Rose Garden after defending the decision to pull all U.S. troops out of Syria on the ground, talking there about heroes, servicemen and women. There weren't young women, obviously, on the front lines there, who have died. I'm assuming that means fighting ISIS broadly, because there have not been to many casualties on the ground in Syria, at least that we know about.

Let me bring in our panel, we'll start there, Charles Hurt, opinion editor for The Washington Times, Susan Page, Washington bureau chief at USA Today and Washington Post columnist Marc Thiessen. OK, first of all, broadly, not dissecting this video from the Rose Garden that just came out, broadly, Charlie, this policy is getting a lot of pushback from the Pentagon, from allies, from others. But it is something the president has said he wants to do for some time.

CHARLES HURT, OPINION EDITOR, WASHINGTON TIMES: It is certainly getting a lot of pushback around here in Washington. I think a lot of that has to do with the fact that the president has talked about the dangers of broadcasting to the enemy our intentions to make moves on the battlefield. And this is kind of the alternative of that. And it is certainly messier than predicting it down the line.

But the bottom line remains, this is the president who won an election promising to curtail military engagement, involvement overseas. We can have all kinds of debates about whether that's a smart thing to do or not. But this is the president keeping that promise of reining those things in. And while a lot of people around here are obviously very upset about it, and a lot of people can make some very good arguments about needing to continue to fight against ISIS, I don't think, beyond the beltway here, people are nearly as worked up about it in the rest of America.

BAIER: Yet. This is what happened with mission accomplished for President Bush, too. There was a sense that, OK, it's done. But it wasn't on.

And here's war against ISIS by the numbers -- 2,000 troops in Syria, about 5,000 stationed in Iraq, recent reports from the Pentagon believed to be about 30,000 current and former ISIS members still present in the Syria and Iraq area. So far, $23 billion military operations that we've spent in Syria and Iraq. And the question is, if these lawmakers are right, Susan, is how much this affects that effort on the ground.

PAGE: Does it embolden Russia? Is it good news for Iran? Does it really reduce U.S. influence in that whole region? And Charles is certainly right that this is something President Trump has said from the days of the campaign that he wanted to do. But he did not apparently give a heads up to a secretary of state, for one, secretary of defense for another, not to mention Republicans on Capitol Hill, that this was coming.

And that is a -- messy might be one word. But it means that you don't have the kind of discussion about whether this is the wise thing to do, how do you go about doing it. And do you claim victory, which is a very dangerous thing to do against a foe like ISIS.

BAIER: I know where you're going to go, but fight for the other side.

BAIER: What's the positive? Is there a positive at all?

MARC THIESSEN, COLUMNIST, WALL STREET JOURNAL: The positive is that Donald Trump has removed the Islamic State's physical caliphate. Just last week they knocked out a final town where they were living in. But the problem with that is what ISIS has now done is ISIS has reverting into it an insurgency. And as you showed on those stats, thousands of troops that can go out and cause all sorts of mayhem.

And also, ISIS is not the only terrorist organization and Syria. Al Qaeda, which is more dangerous than ISIS according to our intelligence community, has a safe haven there. So President Trump deserves great credit for the military accomplishments against ISIS, and while he did campaign, Charlie, for pulling out of a lot of these countries, he also campaigned against Barack Obama's precipitous decision to pull out of Iraq in 2011, saying that it was a disaster that we shouldn't have been there to begin with, but once we were there we had to stay and win, and that he called him the founder of ISIS for allowing is to rise up.

And since then, because of Obama's decision, ISIS carried out 143 attacks in 29 countries that killed more than 2,000 people and injured tens of thousands more. And so having campaigned against that, having pledged, having then re-defeated ISIS, why would he make the same mistake that Barack Obama made by pulling all of our troops out, taking our boot off the terrorist neck, and allowing them and Al Qaeda to have a safe haven in Syria? It makes no sense.

BAIER: Sixty-seven U.S. service members have died fighting ISIS broadly in a number of different countries, not specifically from Syria. The Russia statement about this decision came out. "A milestone story which might involve this decision is a real prospect for a political solution. Hope emerges that this location on the Syrian map will follow the example of Aleppo and other Syrian towns and villages which begin getting back to peaceful life. Once Americans were there, there was no such hope."

There was also no such hope, really, of protecting those Syrian Kurds who, people like President Erdogan, really would like to get rid of as a possible threat.

HURT: And without a doubt, if a result of this is that you do see a recurrence of ISIS and you start seeing these attacks, I think, as you point out, you will see public opinion shift and probably shift very dramatically on this. But in terms of the broad policy that the president has sort of put forward about not being the world's policemen, I would argue that is one of the three main reasons he got elected in the first place. And what we are seeing here is keeping that promise.

BAIER: And we'll have to see what happens on the ground, Susan. When President Bush 41 didn't go all the way to Baghdad and kind of pulled out, there was an ethnic cleansing in Iraq of some of those folks who were fighting. You wonder if that is going to happen here.

PAGE: And also, I think it probably is politically popular. I think Americans have a hard time understanding why we spend so much money, so much blood and treasure in places like Syria. But there are larger calculations that have led other presidents to say this is the kind of mission the United States must do for broader interests. So it's not that I think there's going to be a lot of political blowback for the president. I think there are Democrats who think, great, our soldiers are coming home. We're going to spend time and effort here in the United States, not in places called Syria where I've never been. But that doesn't mean it's the wise thing to do. Time is going to tell us about that.

BAIER: Meantime, it looks like we're heading into another continuing resolution without funding for the border wall, and that is not sitting well with people like Rush Limbaugh.

RUSH LIMBAUGH, RADIO TALK SHOW HOST: It's a textbook example of what the drive-by media calls compromise. Trump gets nothing and the Democrats get everything, including control of the House in a few short weeks. In fact, I just alluded to this, Trump is going to get less than nothing because this compromise strips out the $1.6 billion for the wall that the Senate appropriations committee had already approved weeks ago. That's gone, too.

BAIER: So fallout from this?

THIESSEN: To use the Syria analogy, he drew a red line and didn't enforce it. And so that's the worst of all worlds. Now, you should argue in this case that he probably shouldn't have drawn the red line because he couldn't enforce, because he didn't have the votes and it wasn't going to happen. So what's happened is he's weakened himself. He had to do it because we have to keep the government funding because it would be an absolute catastrophe if we had the shutdown scenario going into Christmas and all the rest. But --

BAIER: Obviously there are people who --

THIESSEN: Who disagree with that.

THIESSEN: But what he has done is he has weakened himself going into the negotiations next year with Pelosi and Schumer and the Democratic Congress because the wall is the leverage that the Democrats have. If they choose to use it, they can get a lot of their agenda through in exchange for the wall. Donald Trump wants the wall. They can get DACA. They can get 11 million illegal immigrants getting legal status.

THIESSEN: Or they can -- that is the question, do they want the issue? Are the Democrats still the resistance or are they now a governing majority now that they control the House? If they want to be governing majority they have to use the leverage they have. And they can do it not just for DACA and illegal immigration, they can do it for -- he's probably go along with Medicaid or Medicare for all. He would go along with all sorts of stuff if he could get a wall.

HURT: If Americans don't care about Syria, they do care about this. This is a tangible loss. And the fact that you have Democrats -- and you asked Senator Klobuchar about this earlier, what if we call it a fence instead of a wall? The fact that you have Democrats playing this word game, I think the bottom line is they do want to keep it as an issue. They view it as a very good issue for them in the election, not just in terms of bargaining.

BAIER: Got to run. Panel, thank you.

Content and Programming Copyright 2018 Fox News Network, LLC. ALL RIGHTS RESERVED. Copyright 2018 ASC Services II Media, LLC. All materials herein are protected by United States copyright law and may not be reproduced, distributed, transmitted, displayed, published or broadcast without the prior written permission of ASC Services II Media, LLC. You may not alter or remove any trademark, copyright or other notice from copies of the content.