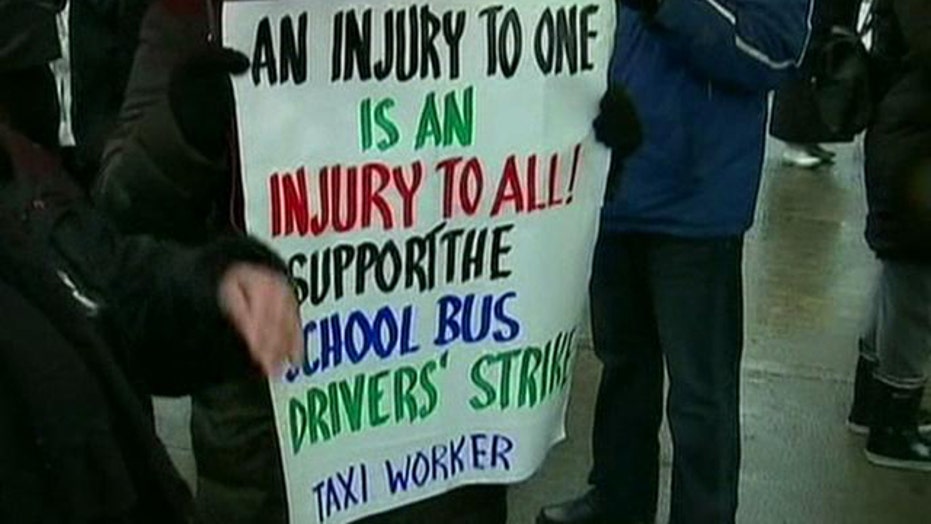 Unions to blame for membership drop?

IN FOCUS: Unions see sharp decline in membership in 2012

STEVE FORBES: Sadly they too often kill the golden goose, which is the job supplier. On the public sector the salaries are unaffordable, the benefits are outlandish. In the private sector, people are finding that if you want real growth and you can't be strangled by these work rules. I was out in Chicago, the McCormick Convention Center, unions made a few of concessions years ago because conventions were saying ‘we aren't coming to this town, we can't get anything done.

RICK UNGAR: I'm not going to deny that unions haven't played a role of shooting themselves in the foot because they have in some degree. You do have to dig a little deeper on this because it gets interesting. Looking at the numbers on last year where they did lose some more membership, you find that 50 percent of it was due to some of these new anti-collective bargaining agreements laws we are seeing in the states. Right to work legislation, these things are taking a toll. Another interesting thing I dug up, we are seeing that some of things unions have spent years fighting for, have now been codified as part of a federal law. If you were an anti-unionist, don't celebrate yet, it's not over. California, the numbers are going up.

ELIZABETH MACDONALD: When you look at what is going on with the union movement, the biggest drop in union membership came because of the drop in government workers. I think what's going on is that union workers are saying ‘it's not worth the aggravation and paying all these dues for what? We have been getting the benefits we have been for years but the union isn't really representing us because benefits are getting cut' Wisconsin was a real watershed moments, because if the unions had made some concessions there that Gov. Walker wanted that both houses of the legislature had voted for the union reform, they may have still had collective bargaining. Basically, they did shoot themselves in the foot in Wisconsin.

BILL BALDWIN: I don't agree, I think the decline in union membership at the private sector is due to a cosmic thing. Like the Pacific Ocean, it's easy to ship goods in from China. You know what might help save the unions, or at least give them a stay of execution? The fact that the Chinese are no longer willing to work on assembly lines for slave wages. In china, factory jobs are better paying than office jobs.

MIKE OZANIAN: The whole purpose of unions and the reason why they exist is to get their members more, and have them do less. That runs counter to productivity. The only way an economy grows is either by adding more people to the workforce or increasing productivity or a combination. Unions run counter to that which is why more people are against them.

MIKE OZANIAN: I think in politics they can take their cue from well-run businesses I think they have to look at affordability and their goals and we shouldn't be sending F-16 fighter jets to countries that are saying they want to eliminate Israel. I think we have to analyze how prudent these investments are.

RICK UNGAR: If you are looking for quality metrics in measuring performance, you will be happy to know that in the Obama administration put in the staunchest program to do just that in 2010. There is one problem we have to recognize. We all know that a certain amount of foreign aid goes to places where we might not want to know where it's going to accomplish the goals we needed to accomplish. We need to consider, do we really want to expose everything that is done with foreign aid money.

STEVE FORBES: It's typical of Secretary Clinton that when there is a problem to just throw more money on it, failure, throw more money at it. Foreign aid is just a waste of money it's one thing for disaster or disease and maybe some military aid to friends if needed. For economic aid, the lesson is very clear, it hinders economic development, does not promote it.

ELIZABETH MACDONALD: No it's not right. I say cut that aid and give it to strengthen our embassies overseas and strengthen our military presence. This is a country that feels entitled to our money, that it deserves U.S. taxpayer money. Time and again Egypt has been behaving in the most reprehensible manner. The president of Egypt has called our president a liar, the hatred of Jews should be instilled in children, and I want to make a bet with Rick. Let's say I get to punch you in the nose every day, and each time you have to pay me 100 bucks. Do you take that?

BILL BALDWIN: So far, we have pulled an equivalent of $1 trillion of economic aid into the third world with little to show for it. The reason is because the recipients do not value the basic tenants of liberty that make capitalism work. I say, put all the money in a pot, and have a winner take all contest. The winner would be the country who has the best record on the previous year on democracy, free speech and property rights.

Democratic lawmaker wants to bring back earmarks in a "responsible" manner

STEVE FORBES: It's like the saying "responsible alcoholism," it just doesn't work. It lubricates corruption because there is a lack of accountability and it also lubricates stuff we don't need; massive spending bills, Obamacare and the like. The only time I think we should have that kind of thing, that kind of pork stuff, is to pass the flat tax, otherwise ban them.

RICK UNGAR: It's fascinating, before the moratorium went into effect; we seem to have a much easier time getting things through congress. We spend $15 billion the year before the moratorium on earmarks and the reality is, it got people to vote for bills. Is it unpleasant? Yeah it kind of is. You know what, as Steve said, its lubrication, and lubrication gets the job done.

ELIZABETH MACDONALD: Yes you are right, I don't think it equates to the earmark ban, or it has anything to do with whether or not we have gridlock. What I'm tired of is the unseemly food fight over pork in congress and time and again. Congress does the drinking and the nation gets the hangover, and that's a problem. The problem is, it will not exert budgetary discipline, the trade off and log rolling there, because you basically have to trade your votes. I don't see that because you see in a lot of appropriations bills, a lot of pork too. It will not reign in any pork spending.

BILL BALDWIN: It made Greece our weight in solvency. Earmarks are small in dollar amount but very large in their psychological effect that reinforces free lunch-ism. The idea that congress can promise goodies forever and never sends a tax bill to pay for them.