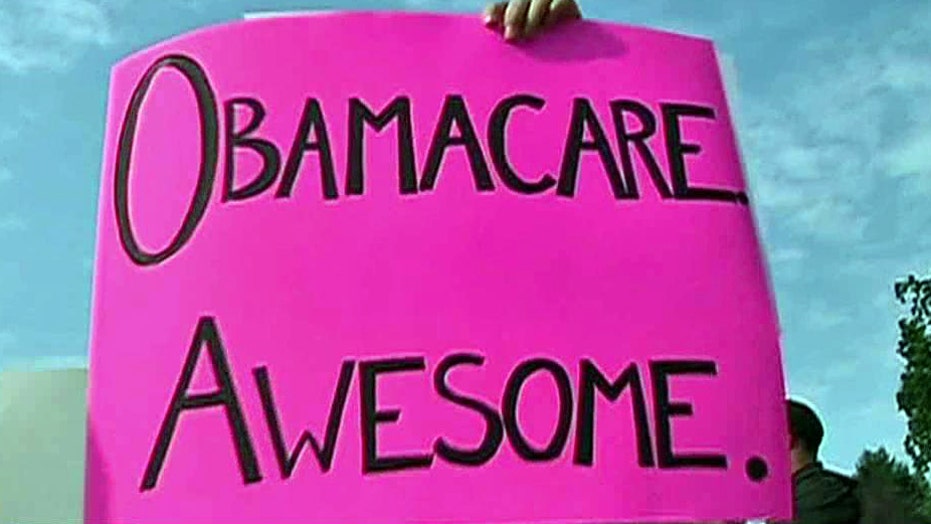 Unions looking for a refund?

REPORT: SOME UNIONS UPSET WITH HEALTH CARE LAW THEY BACKED

GARY KALTBAUM: They should pay for every dime. The politicians didn't read the bill. The unions didn't read the bill. Every time President Obama comes out with something, they just back into it no matter what, and all of a sudden they have an "oops" moment because they realized, "Oh, my costs go up, so please help me." I think the bottom line is, they'll end up with some sort of exemption, some sort of subsidy and guess what? It will be on our backs as usual.

DAGEN MCDOWELL: To Gary's point, if they get these subsidies on top of -- these members already have health insurance - that just opens the door for handouts to anybody. It will ultimately drive up the cost of this health care law even more. Listen, this law was about expanding health insurance to people who didn't have it. Well, union members, you have it. Your costs go up. Suck it up. That's the way it goes.

CHARLIE GASPARINO: It's kind of an absurdity of the health care law in the first place that there is all these sort of outs, you can get an out if you're a union member. By the way it doesn't really work. It can't. I'm not saying it ever was designed to work, but at least it can't work with all these exemptions. It reminds me of all those kids coming out of college, 18, in college, 18 to 22 who voted for the president. We got his lousy economy and pretty weak prescriptions to solving our problems and are now out of work and are complaining.

ADAM LASHINSKY: We should explain to people what this is about. Obviously legislation sometimes has unintended consequences. The unintended consequence here is that the legislation was meant to help. I think someone had said that about people who didn't have health insurance. Well, that creates a disincentive for companies to continue to give the insurance in this certain case. That's what the union is upset by.

CHARLIE GASPARINO: Ed Whitaker of GM is coming out with a new book which is on my desk.

DAGEN MCDOWELL: We're talk being AIG and GM and ALLY Financial in terms of these pay packages and if we look at it the other way, if the federal government and the treasury department were deep inside these companies, even with the bailouts, even with the money we invested, saying you pay him this, you pay him this. If they were managing these companies in such a detailed way, we would be outraged that the government was meddling in these businesses, would we not? We bailed them out. You got to back away at some point.

GARY KALTBAUM: Look, I didn't expect anything different. We listened to all this huffing and puffing about how we're going to work on executive compensation. I am one that thinks a person should make as much as they can get, as long as they negotiate. The problem is a lot of this is taxpayer dollars. But guess what? The banks and politicians are neck deep together and this is where you end up with these type of numbers. Nothing we can do about it. No accountability and this is how we get here.

ADAM LASHINKSY: The only person who is making any sense in this segment at all is Dagen. She's already said it perfectly. We've given people selective information. Yes, we've lost some money on the bank bailouts. Overall on the investments that we made on the financial crisis and most importantly -- that was the right thing to do. It's not about punishing an executive here and an executive there.

GARY KALTBAUM: No, thank you. We're already paying for bags. We pay for overhead. Next is going to be to pay for toilets. The bottom line is if you keep putting all these things on to the airlines, its coming right back at us. It's stupid.

BEN STEIN: We don't want to put anymore burdens on the airlines. They can barely take off as it is.

ADAM LASHINSKY: No. I have no problem with all the fees. That's just the price of flying. But this is a really stupid rule. You don't want to pressure the airlines into getting airplanes up into the air in bad weather, or where there's a mechanical problem. The delays sometimes - oftentimes are for those reasons.

DAGEN MCDOWELL: We will not do that. We already have rules in place. You can't leave passengers stranded on the tarmac more than three hours, which by the way, has worked. God forbid a plane is late. You know what? Deal with it. It's life. It's the world. It's not your right to get somewhere on a plane on time.

CHARLIE GASPARINO: Someone on this network has a fetish for the airlines 'cause we keep talking about this.

GARY KALTBAUM: I like D.R. Horton. The housing stocks are as strong as they can be. Margins are expanding, everything's going right for the housing here, and I think 25 percent over the next six months.

ADAM LASHINSKY: I went for the champions -- Berkshire Hathaway. I know Ben's going to hate this idea, but Berkshire, although it is a company, basically is a broad way to play the market, and it's extremely inexpensive.

BEN STEIN: SPY. I have been so happy with my index picks. I just continue to love them and I hope that when I am carried off and the saints go marching in that my son will keep it, too.