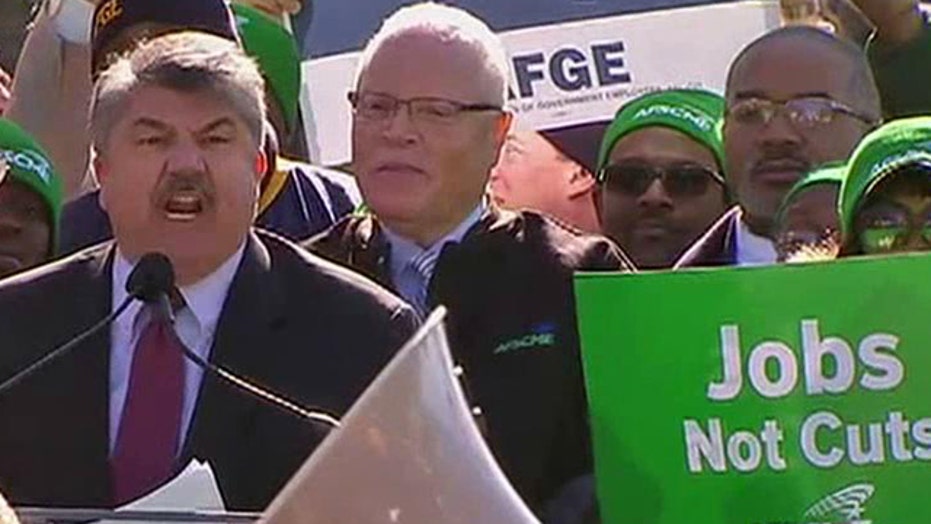 UNIONS DEMANDING MORE SPENDING & NO CUTS: IS THIS WHY WE'LL NEVER GET OUR DEBT UNDER CONTROL?

JONATHAN HOENIG: Eric, unions destroyed the steel industry, the automobile industry, the public education and literally now they're bankrupting government as well. They're only growing in government. Unions account for about 36 percent of government workers; only 6 percent in the private workforce. I tell you, the nerve of Richard Trumka and the unions to demand jobs. Where do they get off with that? We have more government workers now than we had citizens when the country was founded in 1776 and so many of them have nothing to do with actually protecting individual rights. They're educators, library workers, researchers. They should be cut. We need to be cut. And unions need to take a back seat and actually put this country first for once.

SANDRA SMITH: Guess what, Mr. Trumka is right. This is our country. God bless us. They're asking for more money? Did you just see the debt clock, over $16 trillion, Eric. This country is in trouble. The money is gone. They're asking for more, but guess what? They've got a president that's willing to give them more. He's already proposing a 1 percent raise for all federal workers in 2014 on top of the one they're about to get in March. It's a mess.

WAYNE ROGERS: I don't think so. You got to give them credit for what they are. They're a constituency. They're only interested in themselves. Everybody who pesters Washington and lawmakers are only interested in themselves, whether it's a union or a corporation or it's another political group. You can't blame them for that. You know, they're doing what they're supposed to do-- representing their union members. They're not representing the country and they're certainly not representing the public. So they're going to make demands that are outrageous and expect us to pay them. Jonathan was right when he says about the increase in federal workers. Federal workers under Obama have increased over 120,000. That's an enormous number in that period of time. So the bureaucracy continues to grow. The federal government continues to grow. We have big government, big corporations, big labor, and they're demanding what they always have demanded. I don't expect it to change.

JULIE ROGINSKY: Couple things, one is federal government actually, the growth in federal government increased at the slowest rate under this president than since the Korean War. So first and foremost, you guys can laugh all you want but it's a statistic -- second, it's not just the unions who are opposed to sequestration. Other people opposed to sequestration are all the Republicans in the armed services committee who understand that you do this, you're going to plunge the country back into recession. You already have military being cut, civilians being laid off from the military time and time again.

TRACY BYRNES: It's still increasing, it's still unnecessary, and it's still selfish. It is beyond selfish. It drives me insane that so many households have gotten their act together and unions are asking for more. You know what? You can't get more. The thing with big labor, which really interests me, Eric, is that memberships are shrinking. It's almost like they're getting louder to make up for the fact that they're just not enough representation out there. The only people listening to these unions these days are the president. Otherwise, everybody else kind of pushes them aside.

TRACY BYRNES: We're so backwards in what we do lately. All we want to do is probably give, give, give to people who probably could afford this stuff and forget about the people who have done amazing things for our country. Look, you know this administration is trying to get everybody kind of under the old Obama dole here, wants you to be on our phones, on our medical care, on everything under the sun. That way we can take care of you. That's the wrong way to go.

SANDRA SMITH: There is no accountability. That's the problem. The FCC went in and looked at all of those that were on the cell phone program receiving these free cell phones and found that 41 percent of them could not prove their eligibility for these phones. This is government wasted dollars, just out the door and the government's assigned these phones, and not even checking up on who has got them.

JULIE ROGINSKY: Wait, when did the program start? 1984. Let me think about who president was in 1984.It was Saint Ronald Reagan, of course. Look, this is a program that helps if I'm a senior and I'm broke, and a lot seniors are, and I need a life line to get a ride to the hospital-- this is actually a helpful program.

JONATHAN HOENIG: Julie said she might need a phone-- you're going to have to buy it yourself, then.

PROTESTING THE KEYSTONE PIPELINE: WILL THIS HELP TO KEEP GAS PRICES RISING?

SANDRA SMITH: What place does Daryl Hannah have to be commenting on this? Raising a stink might be a bit of a stretch considering 48 people showed up outside of the White House to join her on this, in this, whatever, protest, I guess you'll call it. Here is the thing. I'm not sure who they're trying to protect. But right now we're dependent on the Middle East for a certain portion of the oil that we do consume in this country. Eric, as we don't use it, it will go somewhere else. The smart thing to do would be to get this done.

JONATHAN HOENIG: Prices go down and people's lives improve. Daryl Hannah has been arrested six times in the last couple of years for violating other people's rights. The pipeline violates no one's rights. In fact, it helps us. Fossil fuel powers our modern world and helps us in every regard and those who oppose it, especially those who protest it, it's like they love nature, but hate human beings. They do a real disservice to all of us.

JULIE ROGINSKY: I don't know if President Obama's against the pipeline. Look, I actually think it's a good thing to create jobs. I don't necessarily think it's going to affect demand that much because as we all know, supply for that matter, as soon as this comes through, the OPEC can easily turn down the spigot and we'll have the same problem all oil again. It's trade road worldwide market. I'm not sure how much it will affect prices. But I think it creates jobs, so I'm all for it.

TRACY BYRNES: Price also come down. 20,000 Jobs approximately will be created and our reliance on foreign oil will come down. That's the most important part of this. Wayne is always talking about this. It's national security that is at risk here, when we rely on these countries that hate us. Not to mention slap in the face to Canada if we don't do this. Who wins at the of the day? China. Really, that's where it's going to go.

WAYNE ROGERS: I think the point is this oil is going to go somewhere else. It doesn't matter. So for the environment, it's going to hurt the world environment regardless because the Chinese are going to use the oil just as much as anybody else.

TRACY BYRNES: Lawmakers here in the U.S. are reintroducing the "Robin Hood Tax" on stock, bond transactions. Get ready to readjust your portfolio/investments. Maybe even consider cash.

JONATHAN HOENIG: Take a look at investment companies like (PNNT) to get solid returns.