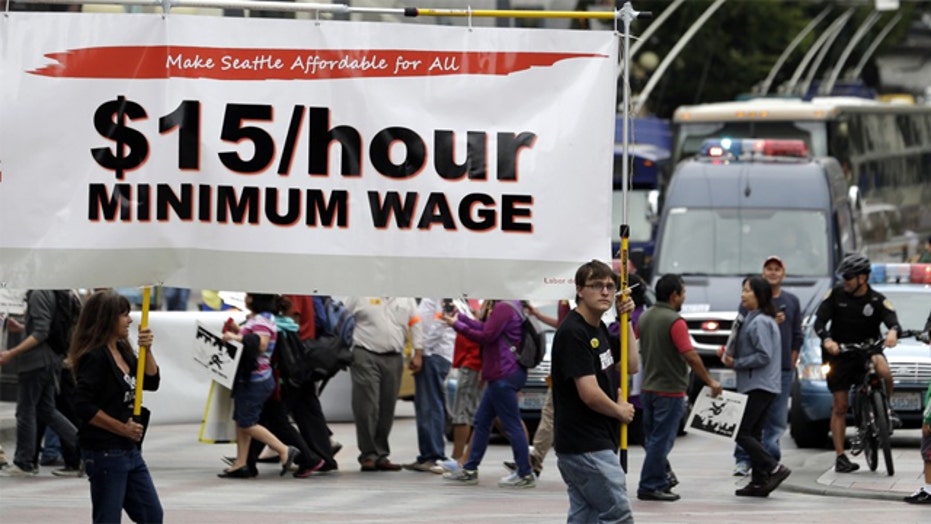 Unions driving new round of protests for $15 minimum wage

But would wage hike kill jobs?

UNIONS DRIVING NEW ROUND OF PROTESTS FOR $15 MINIMUM WAGE

CHARLES PAYNE: It's sort of tough; the industries that they're targeting, they have the slimmest profit margins. Look at their stocks; they have thin profit margins, fewer jobs, and fewer promotions, it's a disaster for lower income people.

CHARLIE GASPARINO: I think the economic research shows at this point you are pushing on a string; it hurts small businesses a lot. I will say this; this is a political minefield for people to oppose this. It's hard for Republicans in a time and place where you do have income equality. Politically, it's a tough sell. Economically, the evidence is so clear, if you start pushing on the string you will get fewer jobs, and you will not get that much more. People will not be helped that much more.

DAGEN MCDOWELL: The money will come from somewhere. It will mean fewer jobs and/or price increases. In this very survey you cited, more than half of those businesses surveyed, 51 percent said they will raise prices. That's minimum wage hike is aimed to help lower income people, but it doesn't help them because they end up paying more.

ADAM LASHINSKY: Well, we tend to look at these things as one variable: if this, then that, when, in fact, there are lots of variables at play. I think you must your finger on it in your question to Charlie, which he didn't answer, when you said could this be posturing by the executives who answer the question, what we have to remember is that this is a survey.

DAGEN MCDOWELL: This particular report that came out it is about insurance companies raising premiums in the ObamaCare exchanges because lo and behold, not enough young people are signing up.

CHARLIE GASPARINO: Nothing here really adds up except for one thing, the one entity or businesses that will make money are the insurance businesses, with all the high premiums they are going to make so much money it's insane.

CHARLES PAYNE: It's an election gimmick. When we make major policies to win elections, in the case of Obama to defer to move away all the attention from a flaccid economic recovery by promising millions of Americans they were going to get insurance, so far I think only 400,000 people who didn't have insurance now have insurance. It's been an unmitigated disaster.

ADAM LASHINSKY: We don't know the numbers of how many were not insured or will be. I would say number one, we're not done. This isn't over; this is an ongoing living breathing thing, although it's sickly sometimes and you all hate it. We are not finished. We are leaving out of this conversation the people that have been added to the Medicaid rolls. To answer you directly, would universal healthcare with a single payer have been a better way to do this? Yes, it would have been a better way to do it, but we didn't have political consensus.

CHARLES PAYNE: Here's what makes it more worrisome, the government is making the IRS a super police agency. They're getting more and more power and that means getting more of our information which put us at greater risk. It's a huge problem.

DAGEN MCDOWELL: I can't say I'm shocked by it. I'm just glad it was IRS employees and not taxpayers. I just think that it shows the weakness of government and the potential for the harm that the government can do to the average person.

CHARLIE GASPARINO: I think the whole thing with the Snowden affair was that a clown like him actually had access to all that stuff. We essentially farm out and contract out valuable pieces of personal information to these outsiders and we don't do very good background checks on them. Our information, my social security number, is in the hands of nit-wits throughout government. That's a real problem.

ADAM LASHINSKY: It's hugely concerning, but this is not specific to the IRS or to the government. Of course it's concerning and of course we should be all over their case. They should be doing a good job on our behalf, but it's not unique.

STOCKS WORKING FOR YOU