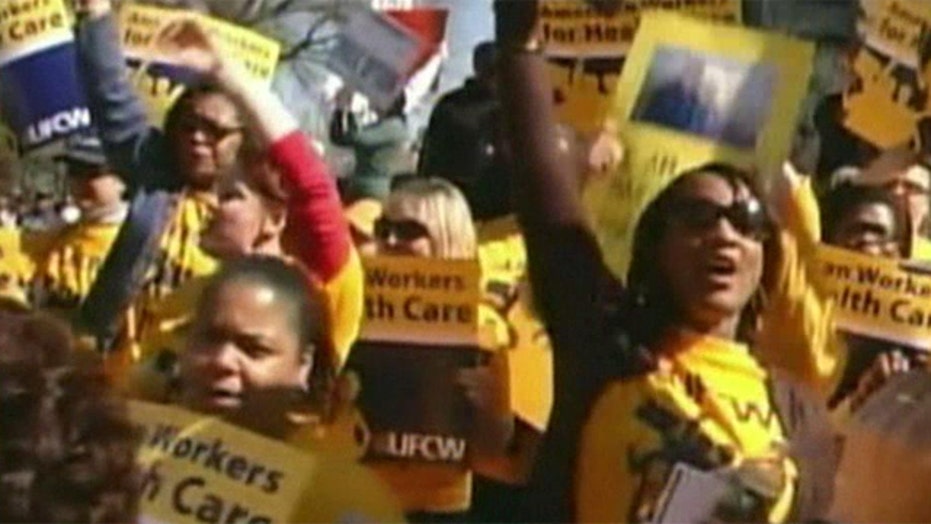 Unions backing away from ObamaCare?

REPORT: UNIONS THAT BACKED HEALTH CARE LAW NOW COMING OUT AGAINST IT

JOHN LAYFIELD: Unions finally have it right! This is something you would see in junior high student council politics. It's, "Hey, let's give free pizza to everybody, no homework, and when people say well how are we going to pay for it, let's just worry about it in a few year. We'll get the rich kids to pay for it." That is the basic equivalent. We have about 20 million union guys right now about to lose their insurance, have to change their insurance, or downgrade their insurance. They are starting to realize that there are costs associated with this. It really kicks in January 1, 2014, that is when you are going to really start to see the outcry. 53 percent of Americans think they are worse off with the health care law, and I am with that 53 percent.

JONAS MAX FERRIS: You can't be on the union side of this. They have plans that are too costly and they should have to go to lower cost plans. It makes the unions mad, but the bottom line is their healthcare plans cost too much money. That is one of the better parts of this agreeably not too great health care program. It will help to address the fact that people have too much insurance and then consumers have too much healthcare because of it. It's as if your company bought you a $30,000 car insurance plan that paid for maintenance and everything on your car with no deductible. You would fix every ding, you would bring it in for oil changes every month and it would rack up costs. That's how the world works with health care. It's a $30,000 plan, they don't pay any premiums and they consume a lot of healthcare.

CHRISTIAN DORSEY: It's a reason to fix the problem that the health care law has yet to address, and that is how to make multi-employer plans not at a competitive disadvantage compared to a healthy insurance exchanges. It doesn't necessarily have to make it more expensive if it's designed correctly. What we have right now is a situation with 26 million people, who like their health insurance and are probably going to be forced to change it. It's something that the law is not intended to do. It can be fixed if the administration is willing to do it.

GARY B. SMITH: All the union people thought, "oh, okay we'll support it because our Cadillac plans will be around". Now they're like, "oh, what, wait?! You mean WE'RE going to be effected by this?". Multiply that by about 30 million! Everyone out there is like what, wait? Our premiums are going up? Our coverage is cut short? You mean we're not covered at all? Oh and by the way all those uninsured people we were going to protect, well there are still going to be able 10 million uninsured? Look what's happening to California. The major insurers out there are declining to participate in these exchanges. We're going to have less competition and higher premiums just like Massachusetts.

TOBIN SMITH: We've gone beyond the pale here, and we really have to think smart about this, and consider moving these people out of harm's way. Look at California, we have active fault lines, and you can't build a home on an active fault. We have places in Florida; we have places in the northeast where there are repeated hurricanes. Here we have three major tornados in the same basic valley in a ten year period; they've had twenty over the last one-hundred years. I think it's time to do a little reality check and save some lives here.

JOHN LAYFIELD: It's just not realistic to transplant this many people who want to live there. I think safe houses in schools are a wonderful idea. But you can't ask people to move out of Oklahoma because of this tornado, or southern New York because of Sandy, or ask people to move out of earthquake zones, it's just not realistic to do. Certain things need to be done, but not this.

CHRISTIAN DORSEY: It's just not practical. Every place has something, and the nature of natural disasters is they're unpredictable. You don't know when they're going to strike; you don't know how they're going to strike. The only response we can have is to be compassionate when something happens, and we all pull together to make sure people can rebuild and go on with their lives.

GARY B. SMITH: It's up to the people. No matter where you live, whether it's California with the forest fires there, Florida with hurricanes, Long Island with the flooding, there's always going to be some danger. People can choose to live there, or not live there. If they choose to live there, hopefully they'll do the right thing by building storm cellars and take out appropriate insurance. It shouldn't fall back on the government to say it's safe to live here, it's not safe to live here. It's up to the people to decide if it's safe or not.

JONAS MAX FERRIS: People have a right to live where they want, but we don't have a right as taxpayers to continue to pay for it over and over again. Let the free market decide. You can't just keep dragging along the federal government and FEMA because you want to live in a place that isn't economically feasible for people to live in.

JOHN LAYFIELD: It's going to help America get off foreign. This creates American jobs, we control the oil, and it will lower oil prices over time.

CHRISTIAN DORSEY: Even the owners and operators of the pipeline project acknowledge that jobs that will be created are temporary jobs, not a long term boost. In terms of gas prices, this oil is destined for export to the global market, which will determine gas prices. It is a drop in the bucket; it will not influence the global oil supply to a degree enough to lower gas prices at the pump. This is in no way a substitute for a real energy policy.

GARY B. SMITH: This is just one small step. From this pipeline hopefully we'll have other pipelines. We will start to drill in ANWR and open up other resources. We've done great things in small periods of time. We landed a man on the moon in eight years, we developed the atomic bomb in four years, we built the Suez Canal. If the President just said, "this and a million other things are going into making gasoline a dollar a gallon and we'll be there in eight years", I bet we could do it.

JONAS MAX FERRIS: I'm for the jobs and the environment. Pollution is more pipelines; we have a lot of leaks from these pipelines and a lot of environmental damage for example the Exxon Pegasus pipeline. The answer is the government should retire all the old pipelines after a number of years and we have to build new ones. We'll have jobs for years and years and less leaking and all this oil everywhere.

TOBIN SMITH: Think big picture here. The energy industry would add another million and a half jobs that would have a trickle effect of service jobs to another three million jobs. We would raise tax revenue from this and we could actually pay off our deficit over time. There is no downside to this.

GARY B. SMITH: Bringing back an oldie but a goodie! (PG) produces a 20 percent profit in 1 year

JOHN LAYFIELD: J.Lo bringing Verizon to the block! (VZ) dials up a 25 percent gain in 1 year