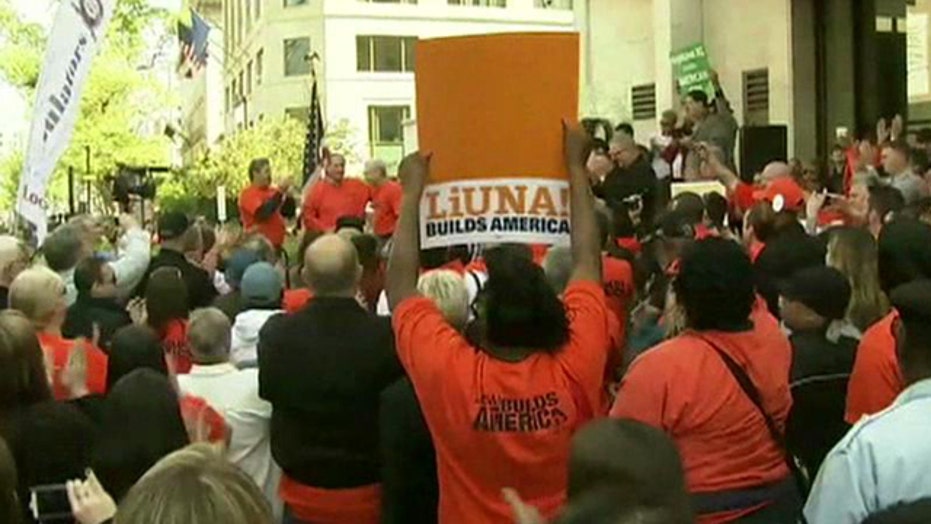 But is the White House listening?

IN FOCUS: SHOULD THE KEYSTONE XL PIPELINE BE BUILT?

STEVE FORBES: They are right, it's a no brainer, its coming in by pipeline not a freighter. Even though oil is fungible this is coming from Canada, I'd rather have the money go there then Venezuela, Iran and other places that are financing terrorism. Why not do it?

RICK UNGAR: I have said all along that this decision has to be made by the people who live along that aquifer that may or may not be put at risk environmentally. That said, we have to be careful not to overstate the impact that oil is going to have on our energy independence. It's going to flow down to Texas, get refined, and sold to the highest bidder around the world. it's not a bad idea, but it doesn't mean it will make us more independent.

SABRINA SHAEFFER: That's exactly why the liberal Washington Post criticized President Obama when he rejected the pipeline originally and said this is an act of national insanity. I think they are right. It may not be the magic bullet to energy independence but the reality is the economic benefits are crystal clear. We have a sluggish American economy right now and this pipeline would bring anywhere from 6-20,000 private sector construction jobs and that doesn't count all the other jobs that would trickle through the economy as a result of this pipeline.

JOHN TAMNY: I'm all for keystone but let's not create a false economic narrative about energy independence as a result of it. We are a rich country precisely because we divide up work around the world. We import TV's from Japan, bananas from Guatemala and oil is no different. The idea that we can wall off the economy from foreign oil is just false and it's also very economically dangerous.

BILL BALDWIN: This isn't going to lower the price of gasoline you pay at the pump, that's because oil pricing is set in a worldwide supply and demand model. I say, if we are going to spend $90 per barrel anyway, I'd much have the $90 going up north, where some of its going to be used to fight terrorism then to send the $90 to the Middle East where some of it will be used to create terrorism.

MORGAN BRENNAN: I agree, this will have an impact on gasoline prices. Oil is about 2/3 of a price of gasoline, the other part that is coming into that is the transportation costs to get crude down to the refineries. This is going to lower those transportation costs it's going to make that Canadian oil down to the pipeline cheaper than the imports we get from Mexico, Venezuela and Saudi Arabia. It will help energy independence.

JOHN TAMNY: If federal Bureaucrats had a clue about what the markets wanted they would be making billions in the private sector. Even venture capitalists say they are wrong the majority of the time in their profit discipline. So the notions that Federal Bureaucrats can do better is laughable, it's time to exit this business all together and give it back to the private sector.

RICK UNGAR: Look, there is no way I can successfully defend the success of Fisker, it was a loser. Here's what I worry about. We have to be careful not to cast this net too wide. We know people who are alive today because of direct government investment in pharmaceuticals. Direct investments in electronics have changed the world. Let's not throw out the baby with the bathwater. I know you guys don't like green investments but let's not kill all important government investments because you don't like Fisker.

MIKE OZANIAN: You don't like the Chevy Volt which is federally subsidized with taxpayer dollars yet they lose money on every sale? The track record of the Obama administration is much worse than any other administration when it comes to this kind of folly. There was tens of billions of dollars that they used for their own pet green projects. Just to those projects, there have been over 500 convictions of corruption. You talk about bad investments? These are also criminal investments.

MORGAN BRENNAN: It makes it harder for me to defend this. I'll take a swing, it's important to remember that half of the investing going into green energy is going into startups. There are some areas where the government is investing and it's doing really well. One of those places energy efficient technology and affordable housing in subsidized housing. We are seeing this in New York city with federal tax cuts. Natural gas which is now on the table with some proposals. So I do think there are some areas where the government should be involved.

STEVE FORBES: This gets to the problem that is government is politics per se, like putting that thing in Joe Biden's home state. We have green energy it's called Natural Gas, created by the private sector, let it move forward. The idea that green is the future while wind mills were created in the medieval time, great for that economy, railroads, 19th century technology. Let the private sector determine what works and what doesn't work because if people don't like it, they won't buy it.

SABRINA SCHAEFFER: Clearly bad habits die hard in the Obama administration; they can't seem to get past these mistakes. What comes to mind to me here in DC is sort if a political aspect of all of this. There is some serious green energy cronyism going on here. First, this $529 million loan is just a drop in the bucket. Since 2009, President Obama has handed out over 34 billion into green energy projects. The Hoover institution found out that 4/5 companies in this current scandal are Obama donors.

STEVE FORBES: This is just a union ploy. If you forcibly raise these wages from $8 to $15/hour you are going to bankrupt most of those fast food places. They operate on small margins. You can get vending machines instead. These union leaders should buy a fast food place, they should do it with their own money, borrow their own money, put their own labor and pay people $15/hour, see how long they last in business.

RICK UNGAR: If unions support the keystone pipeline, unions are good. If workers who can't get by on what they are getting paid, they are below the federal poverty line, unions are bad. That's inconsistent. These people are not making enough money to reach the federal poverty line. I understand that these businesses need to make money. If we continue to pay workers that way no one is going to be able to afford their hamburgers.

MORGAN BRENNAN: My father is a fast food franchisee, and that's the key word- franchise. With a lot of these fast food places, McDonalds, Burger King, and the vast majority of restaurants you are walking into are owned by small business owners. That leases that brand name and leases the products. These are the guys who get taxed by tax hikes, hit by Obamacare costs and as those cost go up, to sell a 99 cent whopper, they will have to lay people off, you are talking about higher rates, and we are talking about small business owners

BILL BALDWIN: I think it's obscene that a food worker will put in a long day and not have enough money to buy food. However you are right about one thing, the union anger should not be directed at the restaurant owners. It should be directed towards the customer, they are only willing to pay so much for a hamburger. There is no way to force them to pay enough for a hamburger to cover the wage.

MIKE OZANIAN: Thugs like Trumka are why union employments in the private sector has plummeted in the last 3 decades. People don't usually take these jobs as career jobs it's a stepping stone to further job gains down the road. If you compare 2 companies in the same industry, UPS and Fedex. UPS is unionized, FedEx is not, FedEx's operating profit is growing 3 times that of UPS and it's growing much faster.

INFORMER: Young and the Restless stocks!

New study showing how younger generations are investing conservatively. Let's give them a safe stock that will still make young people some money.