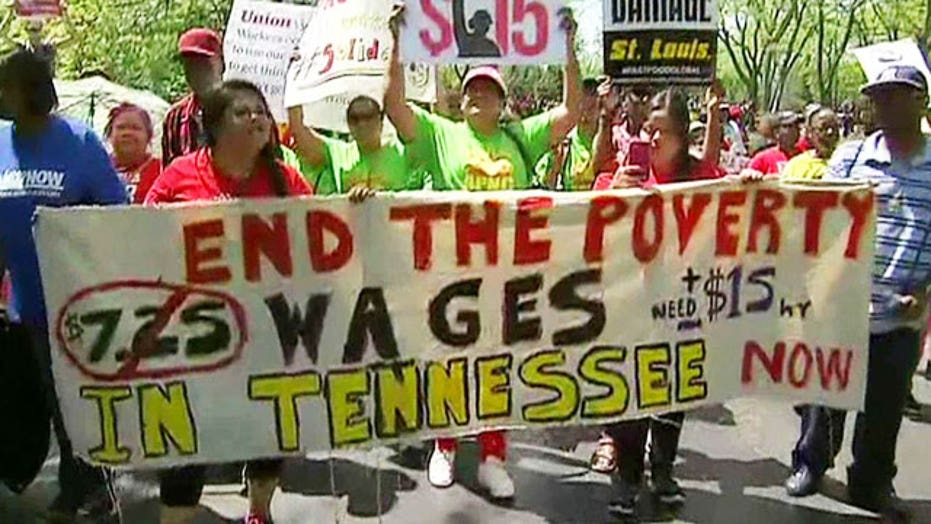 But what's the end game?

CHARLES PAYNE: There are a lot of unions out there whose contracts automatically adjust with a hike in minimum wage. There are ramifications; if it goes north of $10, jobs will be lost. The average home will end up making less money.

BEN STEIN: I don't mind people getting paid $10.10. I don't mind having to pay 50 percent more for a burger, but I do not want the unions pushing everybody around. I want people to make their own decisions. Union bosses shouldn't bully people.

ADAM LASHINSKY: Labor is one of the expenses that go into the products. Will the prices go up? Sure. There is nothing wrong with leadership advocating for their members and then benefiting from that success. That is how it would work at a company too.

CHERYL CASONE: The workers are being victimized here. At some point they need to wake up and realize they are being manipulated by the unions.

CHARLIE GASPARINO: McDonalds is a dirty business. Unions need to realize they aren't going after a big conglomerate; they are actually going after small businesses. McDonalds' are franchises. If you raise the minimum raise, even marginally, it will lead to lay-offs.

CHARLES PAYNE: Between those two, they have almost $2 trillion of our debt. They have smart populations. They have a ton of resources. What is more interesting is that France is selling Russia assault ships. We don't have any influence around the world anymore.

BEN STEIN: We are still a bigger trading partner with China. I'm not that worried about China and Russia getting together. Yes, they are digging a grave for American foreign policy, but that's been Obama's plan the whole time he's been in office. We need a republican president.

CHARLIE GASPARINO: Since Nixon, China has stood between us and Russia. They have put pressure on Russia's policy and vice versa. To reverse that is dangerous.

CHERYL CASONE: They don't care about what we think. The bigger plan is for the Chinese to overcome us in the next 20 years. This is just a piece of the puzzle.

GROWING NUMBER OF "NEAR COLLISIONS" PUTTING SPOTLIGHT ON AIR SAFETY

BEN STEIN: This worries me because there is a general level of incompetence in the airlines.

ADAM LASHINSKY: These are near collisions, not real collisions. The safety record is very high. I'm not happy about it, but it's better than a collision.

CHERYL CASONE: You will die from a bee sting before you die from an airplane. I would much rather get on a plane than drive. The FAA does have a plan. They are going to upgrade the system.

CHARLIE GASPARINO: Planes are a safe way of travel, sometimes this will happen, but it's generally safe.

CHARLES PAYNE: When a crash does happen, it will put something in all of us. We all wonder, "What if?"