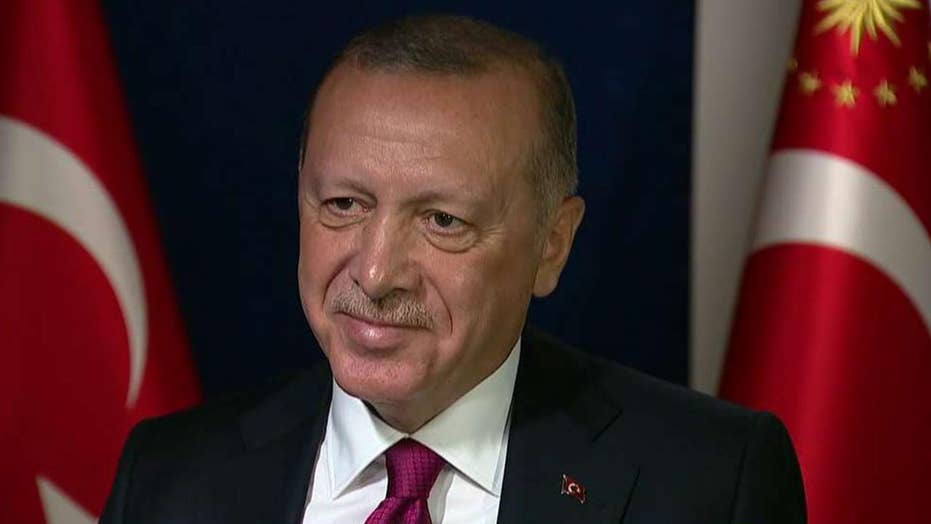 This is a rush transcript from "Special Report with Bret Baier," September 25, 2019. This copy may not be in its final form and may be updated.

BRET BAIER, ANCHOR: Iran's president is accusing the U.S. of what he calls merciless economic terrorism. Hassan Rouhani telling the United Nations General Assembly security in the Persian Gulf can be guaranteed only when his nation's security is as well.

And he says Iran will not negotiate on the issue of its nuclear program as long as sanctions remain in place. Many western nations are blaming Iran for a recent attack on Saudi Arabia's oil facilities. However, Turkish President Recep Erdogan is not. He is urging restraint. He made that comment to me during an interview yesterday at the UN.

TURKISH PRESIDENT RECEP ERDOGAN: Well, I don't think it would be the right thing to do to blame Iran. We need to recognize the fact that attacks of this scale come from several parts of Yemen. But if we just place the entire burden on Iran, it wouldn't be the right way to go, because the evidence available does not necessarily point to that fact.

BAIER: Obviously, the U.S. believes it is Iran. Multiple officials have said that. But let's talk about sanctions, the U.S. is sanctioning Iran very firmly. Are you worried about running into penalties for violating U.S. sanctions on Iran?

ERDOGAN: In my point of view, the world should not be such a world where only the powerful are the right ones. When I was listening to President Trump, that's what I was trying to understand, the idea. I'm strong, I'm powerful, so I'm right. That shouldn't be the case. Sanctions have been accustomed to and sanctions have been avoided in the past. To what extent can we proceed with sanctions? We are here today and gone tomorrow specifically because we are neighbors with Iran. And I for one, know that sanctions have never solved anything.

BAIER: There are charges that your country is helping all of these countries avoid sanctions. The New York Post had an analysis in which it said, under President Erdogan, Turkey has become a permissive jurisdiction for rogue regimes and their illicit bankers. It goes on to say that Tehran relies on Turkish banks and dual Iranian Turkish gold traders, calling it the biggest sanctions evasion scheme in recent history, says in Venezuela, the Maduro regime is using Turkish based companies and the money laundering network to get around sanctions. And that the Assad regime in Syria owns an extensive network of companies in Turkey enabling Syria to circumvent U.S. sanctions. Do you know that to be happening and is it happening with your consent?

ERDOGAN: These are the allegations voiced by a terrorist organization known as Fattal, who were behind the failed coup of July 2016 in Turkey.

BAIER: So, not true.

ERDOGAN: No, no. These allegations are more than wrong. These are all produced propaganda by the federal terrorist organization. Our banks have full compliance with global banking regulations, and the banking transactions have always been conducted within the framework of internationally recognized principles. I don't know who authored the article, but I think this is very cheap and I won't let anyone just defame my banking sector and my banks this way.

BAIER: Mr. President, earlier this month, the Trump administration did sanction a Turkish based senior Hamas official who runs that terror group's budget. And other financial institutions based in Turkey have been sanctioned for terror financing by the U.S. government, not just an article or analysis. So, the question is, are you helping the U.S. crack down on terror financing in your country?

For example, here, the Kurdish YPG terrorist organization extensions are present. We want them to be extradited to Turkey. And the leader of Fatah is currently living in Pennsylvania, living on a land of 400 acres. And he is running his global network quite freely from Pennsylvania.

BAIER: Mr. President, have you been told by the administration that he would be extradited?

ERDOGAN: They have demanded documents and evidence. We have come together with the intelligence agencies in the United States. We got together with the Attorney General and I spoke to President Trump. And we've submitted crates full of evidence and folders which remaster as evidence, but we never garnered any results. If we are strategic partners, we need to fight back together against terrorism. Let's fight together.

BAIER: No promises have been made for the Turkish cleric Gulen to be extradited?

ERDOGAN: No, unfortunately not. And this is saddening because we are strategic partners. And I want them to be extradited, but no.

BAIER: In your speech at the United Nations, you said this.

ERDOGAN: Journalist Jamal Khashoggi, who was brutally slaughtered last year, has become a symbol for the need of justice and equality in the region as the courts have not reached yet a verdict regarding his demise. And we will keep on following up the developments as we are very committed to this case. It's a bleeding wound in our hearts.

BAIER: Next week marks the one-year anniversary of Jamal Khashoggi's murder. What do you mean by that sentence? You'll continue to follow it. What are you looking for? And what have you told the U.S.?

I have spoken to the king and the crown prince more than once, and they pledged that there would be a conclusion to this. But still, no steps have been taken forward. Jamal Khashoggi is no ordinary person. He is a colleague of yours. And he has a very respectable position in the world of media. And he has interviewed me more than once. I know him closely. And this happened in my country. How am I not going to follow up on that? Of course, I'm going to follow up on that. This is our responsibility. We can't let this get away or else we won't establish justice.

BAIER: Do you have evidence that this went all the way up to the crown prince in Saudi Arabia?

And if I'm not mistaken, he was a colonel. This is one of the closest individuals in a core group and they committed these deeds there at the consulate general. And unfortunately, after that, Jamal Khashoggi was cut into pieces and was taken away. The impression of my colleagues working in the intelligence agency are exactly that. These are the responsibilities of the judiciary in Saudi Arabia and the authorities in Saudi Arabia.

BAIER: The Saudis tweeted that they allege that you are being paid to stir all of this up as they are going through their judicial process in this case.

ERDOGAN: If I'm being blamed like that, if they fail to prove the truthfulness of their words, then they are lacking in morals. They are heinous and they are traitors. I am the President of the Republic of Turkey, and nobody can even dare to put that blame on me. They should first clear away this mess.

What they did was to kill an individual who is a Saudi Arabian citizen, and they should identify the perpetrators who came to Turkey on board two airplanes. And now they need to clear up this mess with their own judiciary, getting paid over this. I don't have that in my book. Nobody can compare this with my deeds.

BAIER: You've talked about how journalists like Khashoggi should not be treated as you say he did and was. Since the coup in 2016 attempt, at least 180 media outlets have been forcibly closed in your country. 200,000 websites have been blocked. At least 100 journalists are now behind bars. Hundreds more have been prosecuted as terrorists, many without evidence. This is all according to the Committee to Protect Journalists. And that committee accuses your country of locking up more journalists than any other country in the world. Why are you doing that?

ERDOGAN: You should talk as if you were a journalist and get your answer from me as a politician. I'm telling you; we're talking about individuals undertaking a coup attempt. These are imaginary numbers. They are not that many journalists who have been incarcerated. We need to see each other eye to eye or else these failed coups will be sustained down the line more and more.

BAIER: How would you describe Turkey's relationship with the U.S.?

ERDOGAN: The relations between the U.S. and Turkey date back to a long history built upon very strong bonds. Our eventual goal is to expand the economic relations between Turkey and the United States and increase the trade volume between the two countries up to $100 billion. The region has very urgent problems to be settled. That's why these meetings are of crucial significance.

BAIER: You say you would like to increase the economic relationship with the U.S. You rejected the U.S. threats over purchasing Russian air defense system, losing out then on the acquisition of American F-35 stealth fighter jets and really millions and millions of dollars of business to your country. Why?

ERDOGAN: The approach with regards to this acquisition from Russia was never perceived as a threat by me because we wish to acquire U.S. Patriot missiles during President Obama's time in office. But we were told that the Congress would not allow such a transaction to take place, so we were left without Patriots. Then when President Trump took office, I wanted to acquire Patriots as well.

But now we are still unable to acquire or possess Patriots. When it comes to national defense, we are in a position to be able to cater to our needs, and that's why we've agreed with Russia on these grounds, because the conditions were quite suitable for our needs.

For every U.S. aircraft that was not delivered to Turkey, we are losing $7,000,000, and four or five aircraft were on the brink of delivery, but at the very last minute the delivery was halted. And I don't think it's very becoming of a strategic partnership, and I don't think it's the right way to go.

BAIER: Do you think the relationship is better under President Trump or not?

ERDOGAN: I'm not going to go into such an assessment either of President Obama or President Trump. And I must say that since President Trump took office, we have been enjoying close ties and close relations, other than his latest of developments, which upset us deeply.

ERDOGAN: Thank you very much, thank you.

BAIER: Saudi Arabia's minister of state for foreign affairs is taking issue, a great deal of issue, with the Turkish president's comments that the kingdom is not doing enough in terms of justice for the murder of journalist Jamal Khashoggi.

ADEL AL-JUBEIR, SAUDI MINISTER OF STATE: We have investigated the matter, and the investigation is ongoing. Eighteen people were detained, 11 were charged, five of them are facing the death penalty. We have put in place procedures in our security services to ensure that something like this doesn't happen again, and this is what countries do. We investigate, we hold people accountable, we punish, we put procedures in place to stop it from happening again.

BAIER: Minister al-Jubeir says observers from the five permanent members of the U.N. Security Council and Turkey have attended the trials of the defendants.