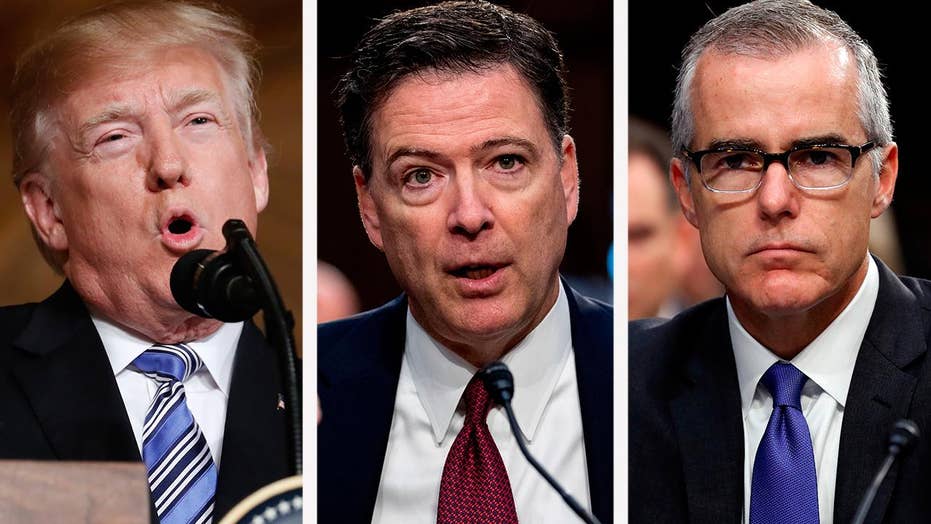 This is a rush transcript from "Special Report with Bret Baier," April 19, 2018. This copy may not be in its final form and may be updated.

BRET BAIER, ANCHOR: Well, the president is weighing in on the topic that we were just talking about here on the panel. I don't know if the TVs are on down there at Mar-a-Lago. But he tweeted just moments ago "James Comey just threw Andrew McCabe under the bus. Inspector general's report on McCabe is a disaster for both of them. Getting a little (lot) of their own medicine?"

Judge, that I.G. report fully, we don't have an extent of all the things that they have, but we do know the McCabe part. And it is interesting that there is a cross-section here of what Comey is saying, what Lynch is saying, what and McCabe is saying, and how this all factors in.

JUDGE ANDREW NAPOLITANO, FOX NEWS SENIOR JUDICIAL ANALYST: Jim Comey, a graduate of the University of Chicago Law School, seems to have forgotten some very basic lessons as Chuck just pointed out. We believe he is a witness for Bob Mueller before one of the grand juries, yet he is really seriously damaging his credibility by opining on everything under the sun having to do with this by speaking on both sides of these issues.

And the president is right that he threw Andrew McCabe under the bus. He may be a witness in a prosecution of McCabe and McCabe's lawyers will for sure play the interviews. When you question him next week, when Tapper questioned him early today or yesterday, whenever it was, and show that to a jury. Is this man worthy of belief? Look what he said about this last week.

BAIER: There are plenty of questions, by the way, that will left on the table I think for our interview April 26th with James Comey. Here's the McCabe team response to the criminal referral today. We were advised of the referral within the past few weeks. Although we believe the referral is unjustified, the standard for an I.G. referral is very low. We have already met with staff members from the U.S. attorney's office. We are confident that unless that there is inappropriate pressure from high levels of the administration, the U.S. attorney's office will conclude that it should decline to prosecute.

How does that go with Jim Jordan said in that soundbite I played earlier where most people say, wait a second, what happened to Mike Flynn?

KATIE PAVLICH, TOWNHALL.COM: Right. It doesn't matter what the political pressure is here. This is a legal situation about the fact that according to the inspector general, Andrew McCabe lied under oath to FBI investigates and inspector general investigators, which is a felony.

Now, the U.S. attorney, her name is Jesse Liu, appointed and confirmed in September of 2017 under President Trump, she is going to have to make a decision with her attorneys in her office about whether there is enough evidence to prosecute Andrew McCabe. But I find it so interesting that his indignant attitude again towards the rule of law in a statement that his attorney is putting out when clearly there has been a double standard especially when it comes to Andrew McCabe being the one who oversaw the Mike Flynn investigation who allegedly lied and pled guilty to lying to an agent not under oath.

BAIER: Quickly, Rudy Giuliani is telling reporters that he is only going to be on for a few weeks and that he's going to try to wrap up the Mueller investigation and clean up the loose ends and get Mueller to wrap this thing up.

CHARLES LANE, THE WASHINGTON POST: He has got super powers. He's the one person in the world that can wrap up this investigation. But if what that means, and you heard President Trump allude to it a little bit in the press conference and said we want to bring this to an end. Maybe there is honestly some new thinking in the White House about the best approach here. Maybe if you bring in Rudy Giuliani as a whole new face to sit down with Mueller and say, OK, let's cut a deal of some kind here, well, you can't rule it out. But it's a tall order.