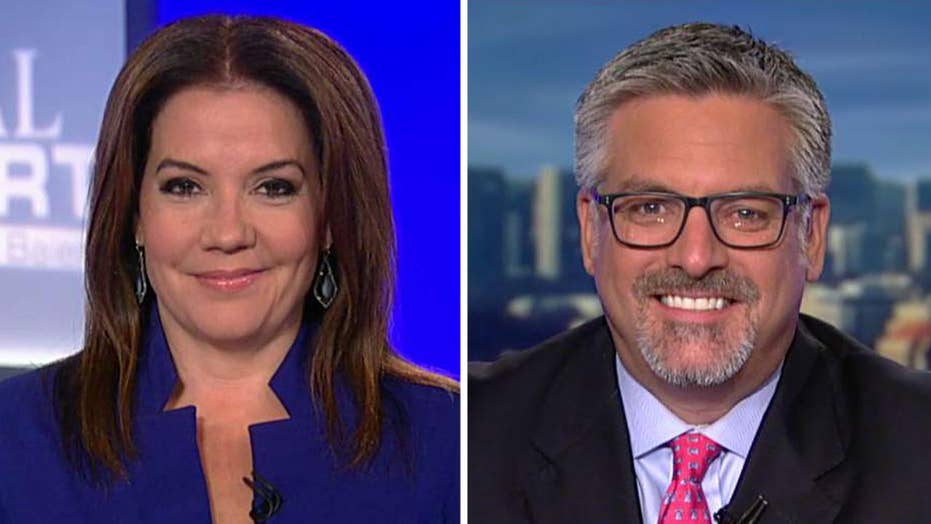 President hammered by critics over his Charlottesville comments; reaction and analysis from the 'Special Report' All-Star panel

This is a rush transcript from "Special Report with Bret Baier," August 16, 2017. This copy may not be in its final form and may be updated.

GOV. JOHN KASICH, R-OHIO: I want Donald Trump to understand it's not about winning an argument. It's about bringing the country together. It is not about having some argument trying to justify these people on the left who went to a sweet town like Charlottesville for purposes of bringing violence. He needs to make it clear he doesn't -- I mean, he has got to fix this and Republicans have to speak out, plain and simple. Who cares what party you are in?

RONNA MCDANIEL, RNC CHAIRWOMAN: The president was saying that the violence -- people brought violence from both sides, and violence isn't OK. But the blame lays squarely at the KKK, the white supremacists and neo-Nazis who organized this rally, caused violence, and are perpetrating -- pushing hate across this country.

BILL HEMMER, FOX NEWS: That's how the day began earlier today, that last voice, the woman who runs the RNC. We did not hear from the president specifically on this today, but we did hear from the vice president, Mike Pence, who said this earlier traveling.

VICE PRESIDENT MIKE PENCE: What happened in Charlottesville was a tragedy. And the president has been clear on this tragedy, and so have I. I spoke at length about this heartbreaking situation on Sunday night in Colombia. And I stand with the president, and I stand by those words.

HEMMER: So with that I want to bring in the panel: Steve Hayes, editor in chief of The Weekly Standard; Mollie Hemingway, senior editor at The Federalist, and Amy Walter, national editor for The Cook Political Report, and good evening to all three of you. Mollie start. How is the White House handling this as of today?

MOLLIE HEMINGWAY, THE FEDERALIST: It seems like every Trump story of the past couple of years fits a similar pattern, which is Trump says something that is in part incendiary or outrageous or even outright false, but also coupled with that is something very true that many people in the establishment aren't willing to say. And then there is a reaction to what he says that focuses on what the media usually feel is false or problematic in some other way, and they focus on that to the exclusion of the larger conversation. And then Trump fans focused only on what they liked about what he said, what was true, and they decline to talk about the problematic aspects of it.

So this conversation is not very fruitful right now from either the Trump White House or the establishment response to it. And just to take an example, Mitt Romney had a tweet last night where he said that something to the effect of these white nationalists are just completely evil. But the people fighting them are all pure of heart. I don't remember exactly what he said. And this is exactly what is so frustrating to people, that we cannot acknowledge just the reality that of course, everyone, most everyone should, of course, condemn white nationalism and other racists. And it's also true that we do have a really serious problem in this country with leftist violence. And the inability of even Republican leaders to just admit that reality, which is just factually true, that's actually just what happened even in this last weekend where you had violence on one side -- you had the murderous violence of the racists and also violence on the other side, it makes it very difficult to have a fruitful conversation.

HEMMER: Let me come back to your point in a moment here. Steve, are they recalibrating today, or where do you see this 24 hours later?

STEVE HAYES, THE WEEKLY STANDARD: I think their strategy today has been to stop digging. They didn't have the president out to continue to talk about this in a way that undoes what he tried to do on Monday, and in that sense I think they have made some progress today.

But you listen to Mike Pence say that the president was clear and unambiguous about his condemnation here, and you look at the White House talking points that you made mention of earlier that talked about the president as a force for calm and unity. That's not only misleading and wrong, it's delusional. I mean, that's not what the president has been. There is a reason that everybody from Republican senators to senior military officials have felt the need to step out and say we oppose white supremacists. We oppose neo-Nazis, because the president himself hasn't been clear enough. He has gone back and forth. He muddled it his press conference yesterday.

HEMMER: And characterized the left on Tuesday.

HAYES: Right. And I think if you talk to White House officials privately they will acknowledge this, and they will yes, we didn't know that the president was going to do. We certainly didn't like what he did necessarily. But going through the motions that this is all part of the plan and everything is fine I think undermines the long-term credibility of the White House and people making that argument.

HEMMER: Amy, you have been in touch with Donald Trump's base. And what can you report tonight about reaction from them?

AMY WALTER, COOK POLITICAL REPORT: Just looking at the polls over these last couple of weeks, what you are see is that his support is dropping not just because independents are saying they don't like him. He has nowhere to go with Democrats. They have never liked him. But there is a softening among Republicans. This is showing up in every single poll that I've seen from Gallup to Marist to private polling that we hear about. The enthusiasm is not there.

And what the president does when he feels the enthusiasm is ebbing is he goes back to what has worked for him on the campaign trail, which is this, I'm going to go out, take no prisoners, off the cuff, Rock 'Em Sock 'Em Robots. And the fact is it's starting to wear thin, even among people who are Republicans, even among people who might have voted for him in the 2016 election. What worked as a candidate is different than what can work as governing. And it is becoming something where I think he keeps going back to that same well, and it's going to get harder and harder for him to pull water.

HEMMER: Late last night the White House came in with talking points. They were made public here, just two of them on screen now. "The president was entirely correct," they say, "Both sides of the violence in Charlottesville acted inappropriately and bear some responsibility. The president condemned with no ambiguity the hate groups fueled by bigotry and racism over the weekend and did so by name yesterday. But for the media that will be never enough," which takes us back to you, Mollie, and the media's reaction thus far.

HEMINGWAY: Right. I wouldn't say it was unambiguous, as Steve points out there has not been clarity of thought in the president's statements. It is also true though that he said that white nationalists and neo-Nazis should be "condemned totally." That's a quote, "condemned totally." So when you have a media report saying that he refused to condemn neo-Nazis and white nationalists, that's just objectively untrue.

But I think that also Republican voters are getting very sick of this entire climate where Republicans are expected to perform these ritualized denunciations where you have to say exactly the right thing in exactly the right way and not say something else and completely avoid that, and then you will not be called a racist, because then you are still called a racist. You saw that Ted Cruz and Marco Rubio came out and condemned, of course, these KKK, white nationalists, and you had media people saying they were skeptical that they really meant it and that it seemed like they were posturing for 2020.

Republicans are sick to death of this type of approach to our conversation. And the media and other people on the left should have thought about the damage they were doing when they called everyone from Mitt Romney to John McCain to Ronald Reagan, everyone a Nazi or Hitler, like George Bush, because their words really cannot be taken seriously.

HEMMER: Quickly, Paul Ryan sent this out. "We must be clear white supremacy is repulsive. This bigotry is counter to all this country stands for. There can be no moral ambiguity." Mitch McConnell said "There are no good neo-Nazis and those who espouse their views are not supporters of American ideals and freedoms. We all have responsibility to stand against hate, violence wherever it raises its evil head." As Mollie is talking, Steve, you are shaking your head in agreement to what she is talking about.

HAYES: Look, there is no question there is a double standard in the media. What Mollie is referring to is a tweet by Eric Lipton, a reporter with The New York Times who said he was cynical about Ted Cruz and Marco Rubio actually condemning Donald Trump, or urging Donald Trump to condemn white supremacists on the merits. He thought they were just positioning for 2020. So it was the case in this instance and in many others that if Republicans do the right thing, they're treated as political actors, and when they don't do the right thing then they are condemned or criticized for being silent by the mainstream media. That's an entirely valid point. It's a good argument.

I just think in this instance the argument that matters most is the Donald Trump argument. This is mostly a Donald Trump story if you look at the kinds of things that he said first Saturday, and then he seems to calibrate his argument, as you suggest, on Monday, and then he undid it yesterday. And he undid it by saying things that, again, seemed to be untrue or misleading or taking liberties with the truth, however you want to characterize it. He talked about many of the people as a part of this rally were good, were very fine people. You talk to people who were actually there among the crowd and they say no, that's not actually true.

HEMMER: We got reaction from them. Quickly, the economic council has been disbanded. I don't know what they did in the first place, perhaps there was some good there and there was some not. What have you found out about that, Amy?

WALTER: Well, that's the whole point is I don't know that a whole lot of people knew there was economic council. But it compounds this idea that the president, who right now is sitting at a 38 percent approval rating, does not have control over his administration, right? This is just one more not particularly good story on top of bad. And the question I think going forward is whether he can get that back. Is, at some point are voters going to give him any benefit of the doubt? And it slowly is chipping away at that.