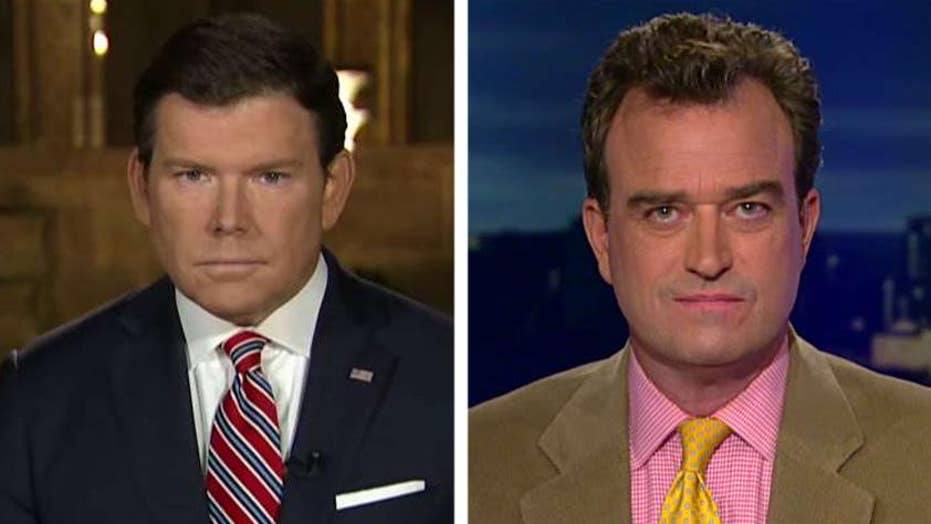 This is a rush transcript from "Special Report with Bret Baier," October 27, 2017. This copy may not be in its final form and may be updated.

SARAH HUCKABEE SANDERS, WHITE HOUSE PRESS SECRETARY: The president wants to see this completed. There's still no evidence of collusion between the president and anyone. If any collusion took place it would be between the DNC and the Clintons. And I think we're now starting to see that all of the things the Democrats had accused this president of doing they were actually guilty of themselves.

JEFFREY TOOBIN, THE NEW YORKER: It's a completely political undertaking designed to get people to talk about the only thing that unifies the Republican Party today, which is hating Hillary Clinton.

One of those investigations is the Uranium One investigation where that FBI informant, the gag order was just lifted. And I asked the attorney general about that and how it came to be.

BAIER: John Roberts has sources saying the president was involved in the discussion and pushed for that decision. Is that true?

JEFF SESSIONS, U.S. ATTORNEY GENERAL: Well I haven't talked to him about that. What I would say is Senator Grassley has been direct with us, for some time. We work with Senator Grassley and are very happy to be able to approve his testimony before the Senate Judiciary Committee.

BAIER: But did Don McGahn, White House counsel, or his deputies call you or your people to say the president really wants this to happen?

SESSIONS: I have not talked to him about that. But I think it's a good thing that it's worked out I'm very pleased about it.

BAIER: So let's bring in our panel: from the Washington bureau, Charles Hurt, opinion editor for The Washington Times; Julie Pace, White House correspondent for the Associated Press, and Eli Lake columnist for Bloomberg View. OK, Julie you heard the attorney general there on that one piece of the investigation. Your thoughts?

JULIE PACE, ASSOCIATED PRESS: Well, it's not surprising that the president would want this informant to be freed from a gag order, but it certainly raises questions any time the president is getting involved with Justice Department business. I think that's why you saw Sessions trying to sidestep that question there.

Broadly if you look at this week, this is a week where the Trump White House feels like they finally are able to go on the offense on the Russia investigation. They feel like this revelation that Democrats, the Clinton campaign and the DNC, were involved in funding a section of this dossier after a Republican had started this off, puts them on stronger footing.

I do think it's really important, though, for people to remember that the reason the Russian investigations exists in the first place isn't because there was a dossier that was funded by opponents of Donald Trump. It exists because there was Russian interference in the election. And the special counsel investigation is there in part because of what we saw transpire around the Comey firing and the fact that you had to have Jeff Sessions recuse himself.

So the dossier is important in the sense that it got a lot of attention and it's something that the FBI felt strongly enough about to bring to Donald Trump and to Barack Obama, but it's not the reason that the Russia investigation exist.

BAIER: Charlie, the one thing we don't know, and I asked the attorney general and he wouldn't go down this road, is whether the dossier was used for the Fisa court or for the surveillance on the Trump campaign.

CHARLES HURT, THE WASHINGTON TIMES: And of course Julie's right. The dossier is not the reason for these investigations. But it does explain, I think, all of the politics that we're seeing today. Try to imagine that first meeting between Donald Trump and his -- an incoming president and his FBI director where his FBI director pushes across the table this dossier and says, listen, we have this, we know this about you. We have this information on good authority. And the president of the United States is sitting there, looking at the guy going, oh my goodness, this is my FBI director?

And that's where their relationship began. And so when you go back to the fact that Comey is ultimately fired, it's amazing that he lasted as long as he did last. How he wasn't fired upon taking office is puzzling to me. So I think that this dossier and all of the new information that's coming out about it really does -- has flipped all of the scripts in Washington. Everything that the Democrats are saying now, the Republicans were saying last week, and vice versa. But clearly there is a lot more that needs to be found out. The most important thing to me is was it the basis for using the government's powerful spying capabilities to spy on a political opponent?

ELI LAKE, BLOOMBERG VIEW: I think that it's important in the following sense, which is that the big thing that Bob Mueller and the Justice Department is going to be looking at is did anyone in Trump's orbit work with the Russians add to, distribute, or use these stolen emails during the election? And that's a serious matter.

But one of the other issues that's become at least a political story, maybe something that's investigated, are the meeting that Donald Trump Jr. had with the Russian lawyer, efforts from Republicans who are close, who were in the sort of Trump orbit to find Hillary Clinton's deleted emails. Well, listen, it's a very simple question. If it's not OK for them to do it, then why is it OK for Democrats to work with a former British spy to then pay for information from senior Russian officials that's damaging for Trump? One is reminded of the old expression about geese and ganders.

BAIER: Yes. Really quickly, Julie, this comes on the day when the administration is starting to move forward on Russian sanctions that Congress said it was kind of dragging its feet on. But now it looks like they're moving forward.

PACE: The administration sometimes doesn't help themselves when it comes to the questions about Russia. There was this delay on the sanctions where you saw Republicans led by Bob Corker, the president's great friend these days, really trying to push for the administration to follow through on what we saw Congress implement earlier this summer. The administration now has done that. Congress is quite pleased that they're moving forward on this. But again, some of these delays create these question where the administration could really just have helped themselves a little bit more in their handling of these issues.