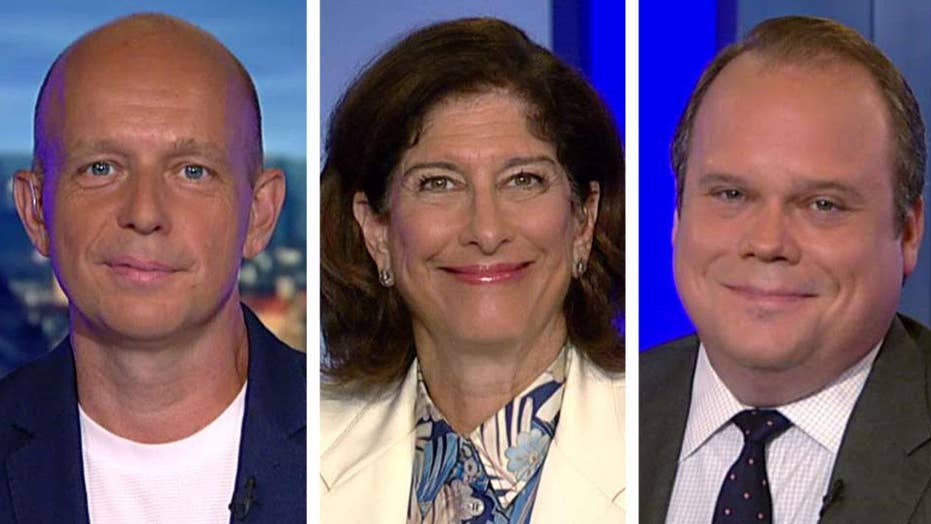 Officials are critical of how to secure Afghanistan. The 'Special Report' All-Star panel weighs in.

This is a rush transcript from "Special Report with Bret Baier," September 3, 2018. This copy may not be in its final form and may be updated.

EMANUEL: Let's bring in our panel: Steve Hilton is a former adviser to British Prime Minister David Cameron, host of "The Next Revolution" here on Fox News Channel, and author of the brand-new book "Positive Populism, a Roadmap to the Next Revolution"; Mara Liasson, national political correspondent for National Public Radio; Chris Stirewalt is politics editor here at the mighty Fox News Channel, and national security analyst Morgan Ortagus. Morgan, you're closest to me. Start us off on Afghanistan.

MORGAN ORTAGUS, NATIONAL SECURITY ANALYST: No pressure. I have to say I think what this administration is doing right on Afghanistan is the regional approach that they're taking with Pakistan and India. So what I'm looking to this week is that Secretary Pompeo is headed to the region. He's going to be meeting in India, in Pakistan. Clearly a lot of these discussions will be about Afghanistan and we have seen of course the funding withdrawal from Pakistan from the U.S. side.

And we have also seen, interestingly, Pakistan continue to get closer to nefarious countries from our perspective, like Iran. Minister Zarif was just there recently and welcomed with open arms. So Afghanistan has been a struggle for past 17 or 18 years for three administrations, but the right approach I think is the one this administration is pursuing now, which is taking into account a regional context. We had 100,000 troops there and we still could not completely decimate the threat from the Taliban, from terrorist organizations, so we're not going to do it with the 13,800 that have there now. We're going to have to do it by holding Pakistan's feet to the fire clearly once and for all.

EMANUEL: And our top story tonight, Chris, was another apparent insider attack killing more of our servicemembers on the frontlines. Your thoughts on Afghanistan?

CHRIS STIREWALT, FOX NEWS: We have two presidents in a row, the Obama doctrine and that Trump doctrine vis-a-vis Afghanistan are very similar. It's very much the same idea. And because both of them ran on basically the same thing. Let's bring the troops home. Let's cut back our commitments overseas, and let's focus on, as both of them have said, nation-building here at home.

The net effect of that, though, is the war doesn't get very much attention. The commanders in chief, we've had two commanders in chief in a row who with these troops, these young men and women deployed over there, dying, fighting for a country and for their livelihood, for their survival, we don't hear very much about it. And it's hard to bring a war effort to bear when you have White Houses one after another who won't talk about it.

MARA LIASSON, NATIONAL PUBLIC RADIO: This is the longest war that America has been involved with. And one of the questions I have is, how much patience does Donald Trump have for this? He really did have to be dragged kicking and screaming into this latest troop commitment, and he didn't want to do it. He I think would be even less willing than President Obama to defer to his generals who say we can't pull out completely. So I'm really wondering if things keep on happening, little casualties here and there, if he's going to continue to agree to have troops there.

STEVE HILTON, FOX NEWS: Leon Panetta is exactly right to say that there's no strategy and hasn't ever been, but he's wrong to focus that on, his phrase I think was securing Afghanistan, as if that is the job of America is to secure Afghanistan. We certainly have an interest in fighting Islamist terror. That's not just about Afghanistan. That's a generational challenge to the west that's happening all over the world. And the idea that you solve that really big problem by trying to wade into an individual country and, quote, secure it I think is really ridiculous.

EMANUEL: Now to another issue, trade war. There is back-and-forth between President Trump and Richard Trumka. Here's Mr. Trumka.

RICHARD TRUMKA, AFL-CIO PRESIDENT: Our economies are integrated. The three countries of North America, the economy is pretty integrated. And it's pretty hard to see how that would work without having Canada in the deal. NAFTA has had a devastating effect on the working people of this country for the last 25 years. So we have been aggressively pursuing an agreement that works for the workers in all three countries, and I can say we are not done yet.

EMANUEL: Steve, your thoughts on this trade battle?

But the more important point is that this isn't something Oresident Trump has just started. So for all the establishment types who are jumping up and down at the first sign of things going a bit wrong and saying what a disaster, they really should show a bit more humility, I think, for the fact that as Richard Trumka said there, for the last few decades we've had a trade system around the world that's completely broken and has caused economic pain and also, let's remember, community disaster, the way the communities of been ripped apart by the effects of the global trading system. All of that needs to be acknowledged while we also hold this administration accountable for what it's trying to do.

LIASSON: What's interesting is Donald Trump has been tweeting that he's going to leave Canada, might leave Canada out of the deal, just go ahead and make a deal with Mexico. I don't know if he's legally able to do that. and what Richard Trumka just said, you can hear almost every single Republican senator say privately they don't want just to deal with Mexico. They want to deal with all three countries, and that's been the big problem for Trump. He seems to have gotten an understanding with Mexico, not a complete deal, an understand, but he hasn't been able to close the deal with Canada.

STIREWALT: The auto industry in particular cares a lot about Canada being part of this. GM runs plants on the other side right there in Windsor, Ontario. This is important to them. We have so much trade that flows back and forth with Canada, and NAFTA has been really good for both countries. In the U.S.-Canada relationship, there is something that can be said about what happens with Mexico, but for the U.S. and Canada, this has been a very prosperous relationship for Trumka and his workers. They want to keep it.

ORTAGUS: I think actually Canada and Trudeau especially have very much overplayed their hand. There was an FTA between the U.S. and Canada pre NAFTA, and so if NAFTA goes away, we would go back to the provisions under that FTA. But I think that Mexico was smart to engage this president very early on on the tough issues. Canada has negotiated with this administration on the easier issues, but on the tougher things, dairy, autos, I.P., they are leaving all of that stuff to the last minute. And Trudeau is going to have to concede on these issues. So while he waited until the 11th hour to try to talk with the president on the toughest issues when he's in the most vulnerable position I think was a big flaw.

EMANUEL: We'll continue to watch it.