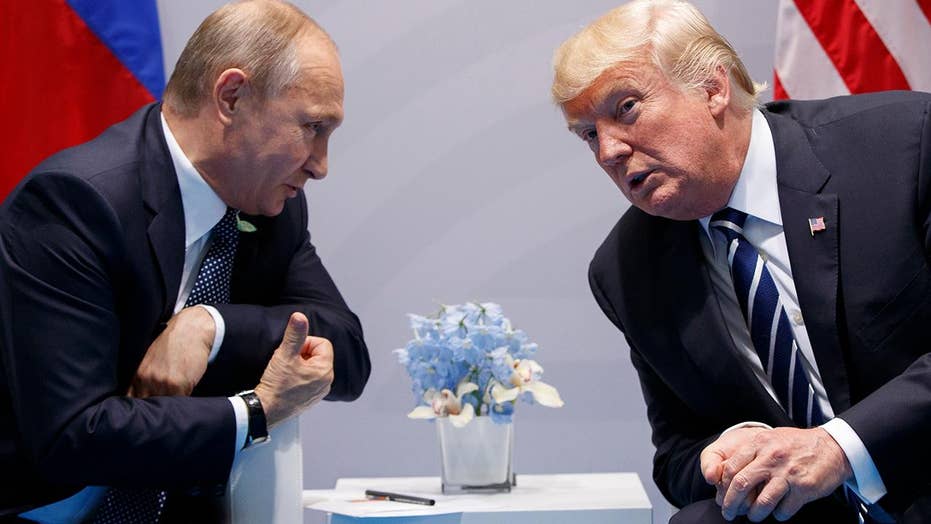 U.S. slaps new sanctions on Russia over election meddling and cyberattacks; reaction and analysis from the 'Special Report' All-Stars.

This is a rush transcript from "Special Report with Bret Baier," March 15, 2018. This copy may not be in its final form and may be updated.

PRESIDENT DONALD TRUMP: It certainly looks like the Russians were behind it. Something that should never, ever happen, and we are taking it very seriously.

GAVIN WILLIAMSON, BRITISH DEFENSE MINISTER: It is absolutely atrocious and outrageous what Russia did in Salisbury. We have responded to that. Frankly, Russia should go away. It should shut up.

SARAH SANDERS, WHITE HOUSE PRESS SECRETARY: The United States is working together with our allies and partners to ensure that this kind of abhorrent attack does not happen again.

SERGEY LAVROV, RUSSIAN FOREIGN MINISTER: We are ready to return into partnership with the European Union when our European neighbors lose interest in following American Russia-phobic tendencies.

BRET BAIER, ANCHOR: The Trump administration making big steps today, sanctioning 19 people, five Russian organizations, 13 of them were indicted by Bob Mueller in his investigation just a few weeks ago. What about this and also the Russia investigation latest? Let's bring in our panel: Jonathan Swan, national politics reporter for Axios; Mollie Hemingway, senior editor at The Federalist, and Olivier Knox, Yahoo! News chief Washington correspondent.

I think where people are concerned is when Mueller goes far afield from the election and far afield from the narrow confines that people understand as being a good thing to investigate. But if people meddled, then they should be held accountable, and not just by charging them with a crime that nobody will ever see them take responsibility for, but sanction or something more like that.

BAIER: Yes, and it seems like is this the new administration take on Russia, Jonathan, on stepping up what Nikki Haley said at the U.N., what we are seeing today, and the revelation of the cyberattacks on U.S. infrastructure, including the electrical grid?

JONATHAN SWAN, AXIOS: Trump's instincts have always been strong on Russia, which is that they are key to solving the Middle East problem, a good relationship with Russia. But evidence upon evidence upon evidence has I think now maybe not totally changed his mind but at least moved them away from where he was maybe six months ago. And certainly the team around him are fairly hawkish, particularly Nikki Haley.

BAIER: Here is Sarah Sanders today on friend or foe from Putin.

SANDERS: That is something that Russia is going to have to make that determination. They're going to have to decide whether or not they want to be a good actor or a bad actor. I think you can see from the actions that we've taken up until this point, we are going to be tough on Russia until they decide to change their behavior.

OLIVIER KNOX, YAHOO! NEWS: So the sanctions being announced today are notable but they're not huge. A lot of the people who were announced today were already under American sanctions, but under Obama and an earlier wave of Trump sanctions. What's really notable is the letter that accompanied the sanctions, that basically lays the election meddling at Vladimir Putin's doorstep. It says that the GRU, the main military intelligence service, was directly involved in the meddling. That's really important.

The decision to reveal this previously undisclosed infrastructure attack, that's going to get a lot of well-deserved headline. It's very worrisome. They apparently had the ability at one point to turn things on and off. That's a significant thing. And then the attribution and punishment for the malware that raced through Europe and did tens of billions of dollars in damage. You're definitely seeing a rhetorical escalation from the administration. We have yet to see really the same escalation in the rhetoric from the president.

The Trump Organization, meantime, Mollie, is saying they have been cooperating, and that they have fully been handing over documents. So why a subpoena is that's true?

HEMINGWAY: Cooperation can go along with a subpoena. The investigation might want to be very particular about what they're looking for and make sure they get everything, not just having it be a shared agreement.

But again, there is a political question in play here that we have been spending a lot of time investigating collusion with Russia, whether the Trump Organization colluded with Russia to steal an election. I'm not sure if there is a political appetite to just look for a crime until you find one. That's how you do things in Russia may be. It's not how you do things in America where you decide guilt and then you just keep fishing, fishing, fishing until you can find something to string someone up on.

BAIER: At the same time you heard earlier in the interviews, Senators Grassley and Graham calling for another special counsel.

SWAN: Yes. And I don't know the chances of that happening, but I think the most significant thing about this story is the story itself and how the president of the United States will react to it, because yes, maybe, perhaps this cooperation has been going on quietly, but we know that when the president sees these stories on television, if you were going to write a story to get under his skin, you would write that story, that Mueller is delving into the Trump organization. Trump said on the record to The New York Times that that would be a red line, going into his business dealing. So I think the most interesting thing is the alchemy that creates.

HEMINGWAY: There's also the issue that this investigation began, again, to look into collusion. And what it found pretty quickly is not collusion. We have all these congressional investigations looking into it. What they do find --

SWAN: We don't know that with Mueller.

So what I would say, unlike what you're saying, that's unlikely there will be a Special Counsel, I don't see how else you restore the credibility of these agencies unless you have someone truly independent who can do the work, investigate, and hold people accountable.

BAIER: I want to turn quickly to what the president said, that there is not going to be, or the stories of a big shake-up in his White House are overwritten, overexaggerated, fake news, whatever you want to call it. Clearly, he is looking at making other moves, we just don't know when and how big.

KNOX: The president flatly denied it, called it fake news when there were reports that he was working on a plan looking to replace Secretary of State Rex Tillerson with CIA Director Mike Pompeo which is exactly what has happened here now. It is true that sometimes the president will reach out to advisors outside the White House and tell them, what do you think of so- and-so? Should I replace so-and-so with this other person, and that translates into a lot of these stories that are the president is considering dumping the following people.

Now, I'm told H.R. McMaster has been looking carefully at the possibility of an exit. But we have had enough chaos to this point that there is no reason to think there's not more coming.

BAIER: Do you buy that?

SWAN: If you, Bret Baier, go to the White House now and say I have reporting that H.R. McMaster is on his way out, you would not get a lot of pushback. They're not going to lean into pushing back on that. That's where we are at now. There is a common acceptance within the White House that at some point probably in the fairly near future, he's gone. But nobody as of two hours ago within the president's inner circle knew when that was going to happen and who is going to replace him.

So I still haven't written the H.R. McMaster story is gone because at this point it's been written every week for eight months. At some point it will be correct. I believe it will be correct probably fairly soon. But as Olivier pointed out, when the president talks like this quite openly come, it doesn't necessarily mean he's going to act imminently.

BAIER: The parlor games of Washington.