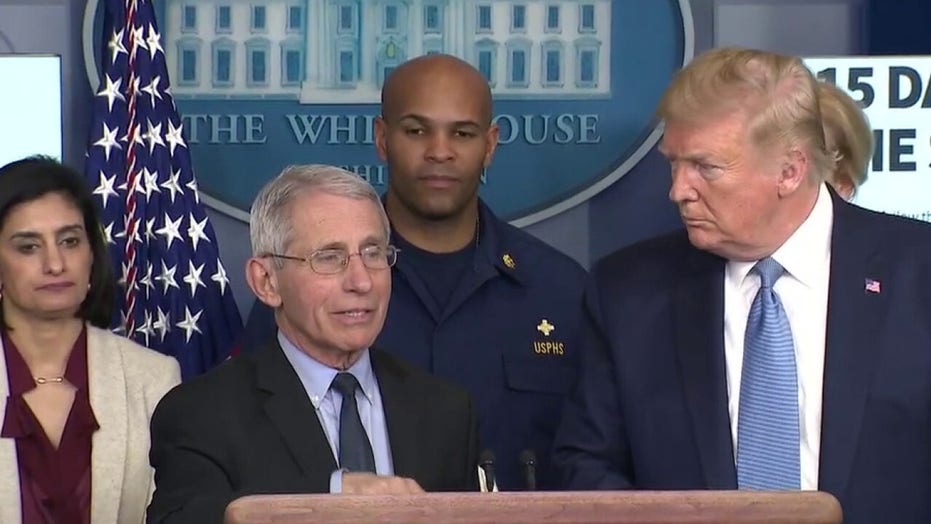 This is a rush transcript from "Special Report," March 16, 2020. This copy may not be in its final form and may be updated.

PRESIDENT DONALD TRUMP: At this point, not nationwide, but -- there are some places in our nation that are not very affected at all. But we may look at certain areas, certain hot spots, as they call them. We will look into that. But at this moment, no, we're not.

DR. ANTHONY FAUCI, NATIONAL INSTITUTES OF ALLERGY AND INFECTIOUS DISEASES:  The guidelines are a 15-day trial guideline to be reconsidering. It isn't that these guidelines are now going to be in effect until July. What the president is saying is that the trajectory of the outbreak may go until then. Make sure we don't think that these are solid in stone until July.

Let's bring in our panel, Katie Pavlich, news editor at Townhall.com, Mary Anne Marsh, former senior adviser to Senator John Kerry, and Washington Post columnist Marc Thiessen. All right, Katie, what about these new guidelines? There's been a lot of speculation out there that this is going to lead to a quarantine, a national shutdown. This is obviously well short of that. But you heard the president in that opening.

KATIE PAVLICH, NEWS EDITOR, TOWNHALL.COM: It is well short of that, but as the president also pointed out today, all options are on the table. And I would point out that when the doctors and the experts talk about guidelines and people don't follow them, they specifically called out the millennial generation today, they then do not become voluntary guidelines. They become forced compliance. So it is in the interest of young people to take this seriously, to listen to what people are saying, and to really take seriously that this isn't just about them. You had Dr. Birx talk about how this about saving the greatest generation, the millennial generation can step up and do that.

And also I think it's really interesting to watch how quickly local authorities are moving as well, whether it's on the city level or the state level. You saw in New York today a number of things changed. You see in Washington, D.C., things are changing. A number of regulations are changing on the way that businesses operate, especially restaurants and bars, especially. So these things are now guidelines, and if people do not comply, they will no longer be voluntary.

BAIER: Let's listen to more from that news conference this afternoon.

FAUCI:  When you're dealing with the emerging infectious diseases outbreak, you are always behind where you think you are if you think that today reflects where you really are.

TRUMP: No matter where you look, this is something, it's an invisible enemy.

DR. DEBORAH BIRX, CORONAVIRUS RESPONSE COORDINATOR: I want to speak particularly to the largest generation now, our millennials. They are the core group that will stop this virus. We are asking all of them to hold their gatherings to under 10 people.

BAIER: Mary Anne, this seemed to take a different tone today in this White House briefing.

MARY ANNE MARSH, FORMER SEN. JOHN KERRY SENIOR ADVISER: It absolutely did, and it has to, because this is a matter of life and death. And the reality is we are only as strong as our weakest link, and that means we have to have a national response across the board. And that's why so many governors and mayors have really stepped into the vacuum that the federal government has left.

And I think what we really need now is for the federal government and the Trump administration to turn on the spigots, push out the Army Corps of Engineers, and start building those extra hospital facilities, push out manufacturing, push out the stockpile, do all the things that we have so we can provide people every resource they need to fight this, because we are behind. We lost precious time that we cannot make up, but we have to put our foot on the pedal here, go forward, and give the states and the cities what they need, because, to Katie's point, many of the things she mentioned have been in place in many other states and cities in last two weeks, in the last 24 or 48 hours, long before the federal government got to it.

So I think the best thing that can happen now is to provide the resources that only the federal government can do so governors and mayors can fight it on the ground. And unfortunately, that has been a patchwork of programs across the country.

BAIER: The president had a teleconference with governors today. Marc, one of the misconceptions about the early set up was addressed in an op-ed in "The Washington Post." Former NSC senior director Tim Morrison saying, "No, the White House didn't dissolve its pandemic response office. I was there. It's been alleged by multiple officials of the Obama administration, including "The Post," that the president and his then national security advisor John Bolton dissolved the office at the White House in charge of pandemic preparedness. Because I lead the very directorate assigned that mission, the counterproliferation and biodefense office for a year and then handed it off to another official who still holds the post, I know the charge is specious." There's just some politics that creeps in, obviously, when everybody is trying to deal with the crisis at hand.

MARC THIESSEN, AMERICAN ENTERPRISE INSTITUTE: It shouldn't creep in. This is a time when we should come together as a nation and put a aside partisanship, put aside the backbiting. Look, after this is all over, I'm sure we're going to have a 9/11 Commission style investigation that is going to look through, not to lay blame, but to figure just as we did after 9/11, where were the gaps, what didn't work, what failed, what succeeded, so when the next pandemic comes around we can fix it. But this is not the time for laying blame.

I think we're doing a pretty good job now of getting people to quarantine and so stay -- social distancing. What we need to do now is come together to help the people who are being economically affected by this, because we are probably are going to go into a recession. It's probably going to be V- shaped recession, because it's going to be very steep coming down because country is basically shutting down. But the fundamentals of the economy are very strong, and there is no underlying problems like there were in the 2000 financial crisis with our economy. So the V-shape is going to be a very big coming up, but we have got to help people in between in that period, people who are losing their jobs, people who don't have child care for their families because they're stuck with all the schools getting shut down, and businesses that could in that short period, what will hopefully be a short period, go bankrupt or collapse. We've got to come together to help them.

BAIER: I don't think that's totally figured about what the total response will be. The treasury secretary and the president talking about that. Katie, final word here, if it came to a national quarantine of some sort, it's pretty hard to imagine how that all gets -- how it's done.

PAVLICH: Enforced. Well, look, local and federal governments and law enforcement will work together. The National Guard could be of deployed. We see that happen after hurricanes to try and help people. That is something that they'll have to figure out. But so far there has been a very good correspondence between the White House, the administration, the private sector, grocery stores, and local governments, whether it's cities or states. So that's something that they will have to figure out. But again, the guidelines are voluntary now. If people don't comply, they will no longer be voluntary.

BAIER: All right, panel, thank you, as always.

Content and Programming Copyright 2020 Fox News Network, LLC. ALL RIGHTS RESERVED. Copyright 2020 ASC Services II Media, LLC. All materials herein are protected by United States copyright law and may not be reproduced, distributed, transmitted, displayed, published or broadcast without the prior written permission of ASC Services II Media, LLC. You may not alter or remove any trademark, copyright or other notice from copies of the content.