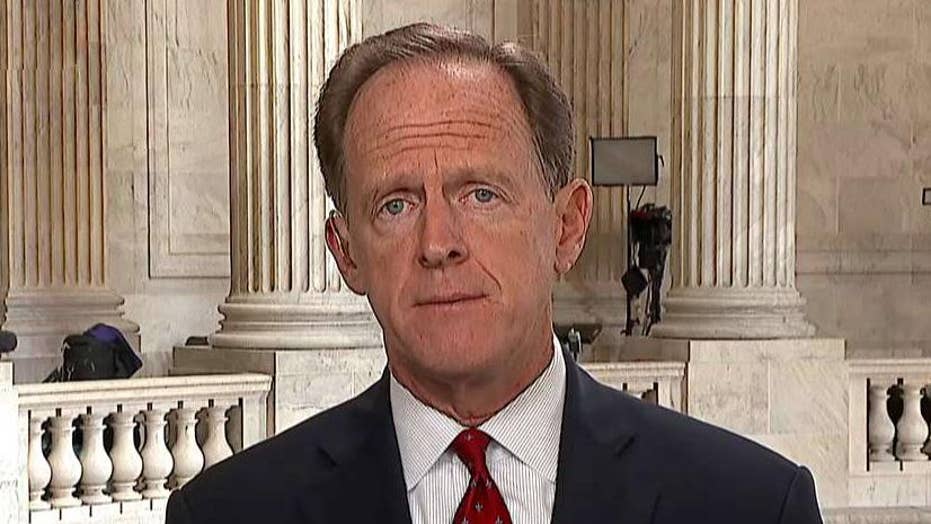 Toomey: Congress should have a role when setting tariffs

This is a rush transcript from "Your World," July 11, 2018. This copy may not be in its final form and may be updated.

MARIA BARTIROMO, GUEST HOST: One of the Republican senators bucking the president on trade today, trying to limit his powers on tariffs, is Pennsylvania's Pat Toomey.

Senator, good to have you on the program today. Thanks for joining us.

SEN. PAT TOOMEY, R-PENNSYLVANIA: Hi, Maria. Thanks for having me.

BARTIROMO: Let me ask you the details of this.

The measure approved Wednesday, does it address China?

TOOMEY: No, it really doesn't.

It's very narrow in focus. And, in fact, it's not binding. This is just the first step. But I think it's an important step.

What our measure that we voted on today does is, it expressed the sense of a vast majority of U.S. senators that, in the future, that the imposition of the 232, the Section 232 tariffs, those that invoke national security, that in order to do that, there should be a role for Congress, not the unilateral role that the president has been using thus far.

So, a modest step in the right direction, in my view.

BARTIROMO: So, this is more about the aluminum and steel tariffs then?

TOOMEY: It is about aluminum and steel, that's right, and the tariffs that have been imposed on our close allies like Canada Mexico and the E.U.

But it's an important step in the direction of restoring to Congress our constitutional responsibility in this space.

BARTIROMO: Are you not happy with President Trump's stance on trade right now? I know you have been vocal in terms of making sure that we understand the impact of some of these tariffs.

No, I really disagree with the president on this. Look, I think there's been terrific policy on tax reform. The president's been terrific about rolling back regulations. Those are the reasons that we have had such a tremendous surge of economic growth.

But I do think we could derail this if we get into a full-blown trade war. I think that it's been part of a trend on the part of this administration, from a bad sugar deal with Mexico that was very protectionist, imposing tariffs on solar panels and washer machines, as you will recall, earlier this year, and now the steel and aluminum tariffs and a huge wave of tariffs on Chinese products.

Protectionism leads to higher costs, fewer options for consumers, and fewer jobs for American exporters. And that's not a good combination.

BARTIROMO: The president keeps saying that this is a negotiation, suggesting that perhaps he's just playing poker, if you will.

Do you not think this is a negotiation?

What are we negotiating for with respect to the taxes we're imposing on Americans when they choose to buy, say, Canadian or Mexican steel, or aluminum, for that matter?

I asked this question of Wilbur Ross. I say, what do the Canadians, for instance, have to do so that you will stop taxing my constituents when they choose to buy the modest amount of Canadian steel that we do buy?

And his answer was, they have to agree to a revised NAFTA.

The provisions that the administration is seeking in the revised NAFTA are bad provisions. They will make the deal a worse deal, not a better deal.

So, I really -- I disagree with the end goals that have been articulated by our trade rep. And I don't like these tactics that are being used to get there.

BARTIROMO: Do you think we're going to see a NAFTA deal before the midterm elections?

TOOMEY: I don't know the answer to that. I really don't.

BARTIROMO: And, well, with the new president in Mexico, you wonder if something has changed.

But, real quick, before you go, are you going to vote yes for Judge Kavanaugh?

TOOMEY: I'm going to do my due diligence. And I have not had a chance to complete that.

That'll include a sit-down meeting with him and a review of his opinions.

But let me just be clear, Maria. Everything I have seen so far is terrific. I'm very pleased with this selection. I'm looking forward to completing the process. But I certainly think it looks like he's going to be confirmed.

BARTIROMO: Senator, good to see you this afternoon. Thank you.

TOOMEY: Thanks for having me.