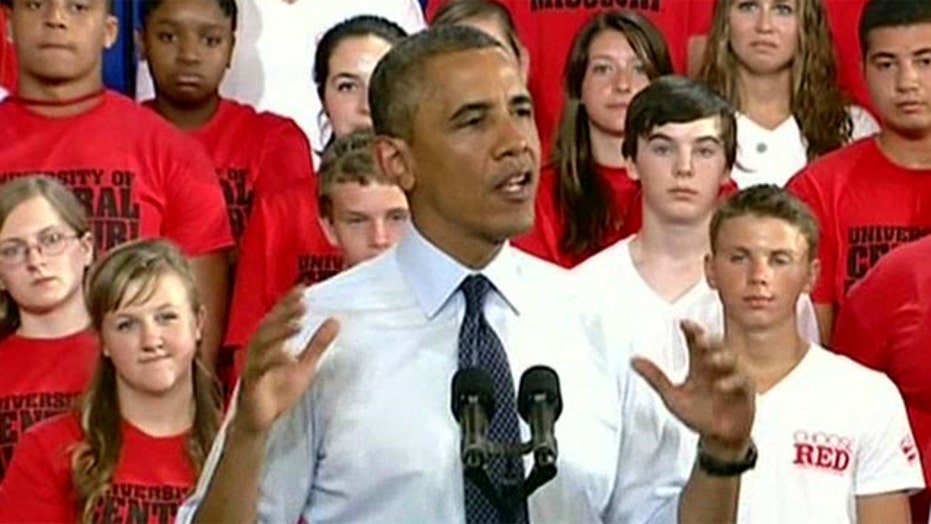 Time to move past the IRS scandal?

Why President Obama wants nation to move on

IN FOCUS: The president says that the IRS scandal is a distraction and should be forgotten

ELIZABETH MACDONALD: Just a few months ago, he [President Obama] he did say at that time he had no patience with what was going on with the IRS. He found it outrageous; the IRS must be held accountable. But now he's saying, essentially-he's rewriting history is what he's doing. IRS workers are saying that a task force in Washington, D.C. basically oversaw this political targeting. Even the new head of the IRS is saying we need more investigation. What they're trying to do is silence the opposition who don't like health reform and who don't like the way the country is being run.

RICK UNGAR: Here's the reality. The president is not suddenly saying that the IRS targeting of conservative groups didn't happen. As Liz said, he did acknowledge it. He continues to acknowledge it. What he's talking about is this effort to draw this direct line to the White House, most recently exhibited by The Daily Caller when they pretended that the IRS attorney went to a meeting-which he did-at the White House two days before. Take a look at that picture. You'll see him with 13 other agency people-not Internal Revenue Service agency people-at a meeting with the president. They come from all different agencies. This is the place where allegedly this conspiracy was hatched.

STEVE FORBES: The fact of the matter is they're dragging this thing out, being very slow on releasing documents and the like, and the president saying this is fake is like Richard Nixon saying the Watergate burglary is a third-rate burglary. And the fact of the matter is the president is right out in the open in 2010 numerous times, calling for investigations by the IRS. A dozen Democrat senators did the same thing, so they didn't need to do it in secret meetings. They did it right out in the open, they wanted persecution, and they got it.

JOHN TAMNY: President Obama's hubris is staggering. Wouldn't he love for us to forget this and move on? But the reality is an obnoxious, unaccountable federal agency blunted the anti-Obama ground game, but potentially blunted the anti-President Obama ground game that could have changed the electoral result in 2012. He has to remember that there's a lot of emotion logically tied up in every election, this one no different from the others. And the scandal is not going away. People do want answers.

RICH KARLGAARD: When the House is in Republican hands, it really thwarts Obama's agenda and his reach for his legacy in history. You can't escape the fact that former IRS Chief Doug Schulman visited the White House 157 times. But do I think this scandal is really going to get legs à la Watergate? No. Because we have the most politicized attorney general probably in history or at least since Nixon's John Mitchell in Eric Holder. And Eric Holder will probably fall on his sword before this goes anywhere.

SABRINA SCHAEFFER: I think we do. But rich is right. Eric Holder, talking about distractions, now he is focused on Texas when we should be talking about the IRS. The president is up in the clouds. At best, he is truly disconnected from the American people and at worst, grossly dishonest. If you look at polls, Gallup, Rasmussen and others 60 percent of the American people think it is real and source and starts and ends in Washington.

White Castle says it may only hire part-time workers due to costs the health care law will bring.

STEVE FORBES: Absolutely. The 50 employee threshold will play out more and more. You have a business growing and now you will hold it back because of increased costs from the government and in terms of the 30 hour work week, they want to raise it to 40 hours to get people to have full- time jobs. It is a job killer pure and simple. Those who say you get tax credits and things like. That these are small businesses and small margins and it is crushing them.

SABRINA SCHAEFFER: I am skeptical that people are working fewer hours because they want to in this economy. People are realizing that our economic health is at stake with this law, and not just the physical health. It is a real problem. It is a minimum essential coverage requirement that Obama care said that all employers have to provide a Cadillac version of insurance. The reality not every business can absorb that cost. McDonalds might be able to and White Castle may not. They are pushing surcharges onto their customers; they are lowering the number of people they employ. This is definitely a jobs killer

MORGAN BRENNAN: I looked at the same study as Rick. I don't believe it is a job's killer and a lot of it depends on the business, we are talking about small business with smaller margins here. Actually if you look at that, of the 28 Million small businesses, less than 4 percent are in the 40 to 50 staff mark that will be implemented by the Obama care regulation and nine out of ten offer an insurance program. I am skeptical. I don't think it will kill jobs but potentially change the type of jobs that are offered. I don't see it killing jobs.

MIKE OZANIAN: The majority of the job growth from the last 10 years came from small businesses. The reason why President Obama is the first president to be there in a recovery where incomes have fallen and labor participation rate has fallen, he is pushing the health care mandate on to people. He extended the mandate because it doesn't work. It is raising costs and when costs go up, businesses hire less.

JOHN TAMNY: It is not even debatable. It is a job killer. Labor is a cost and businesses hire workers because they feel they can get more than the costs back. Obama care, even Rick would agree, it is going to raise the costs of hiring because of that job creation will go down. This is basic economics.

The TSA is expanding its 'PreCheck' screening program to everybody; you just need to pay $85 to enroll, pass a background check with fingerprints

RICH KARLGAARD: I can't think of a greater bargain than $85 for five years and saving you countless hours in the lines. I wasted hundreds of hours standing in the lines and a complete overreaction to the terrorism threat by the TSA.

ELIZABETH MACDONALD: I like the idea. I am sick of the TSA's frequent groper program of old ladies and grandmas and kids and military that don't deserve it. By the way, $85 and why not boot up people with the frequent flyer program. My problem is the massive database that needs to be make sure they are not terrorist. And it is so what, five years, anybody can slip through the cracks. TSA have allowed knives and guns into the airports and through the screeners, I am little concern by it.

STEVE FORBES: No, not if they do it right and I hope they use better judgment here than when they allow axes and machetes on the airplanes. They backed off on that. They have a pre-TSA program and when it works it is magnificent. The key thing is $85 bucks I am like rich, I am glad to pay the government money and get something in return.

MIKE OZANIAN: It should be free. It would require less government resources than when they put you through the rigmarole. It will save the government money.

RICK UNGAR: I agree with everybody on this. I am easy to get along with. I have sharpened my axe in anticipation of taking it on the plane. Of course it is a good idea. They tried it once before. I remember several years ago that allowed me to skip this. It was wonderful. If they want to do it for free, all the better. But it I am willing to pay.

Pick a stock as a gift for the Royal Baby that will give you royal-sized profits.