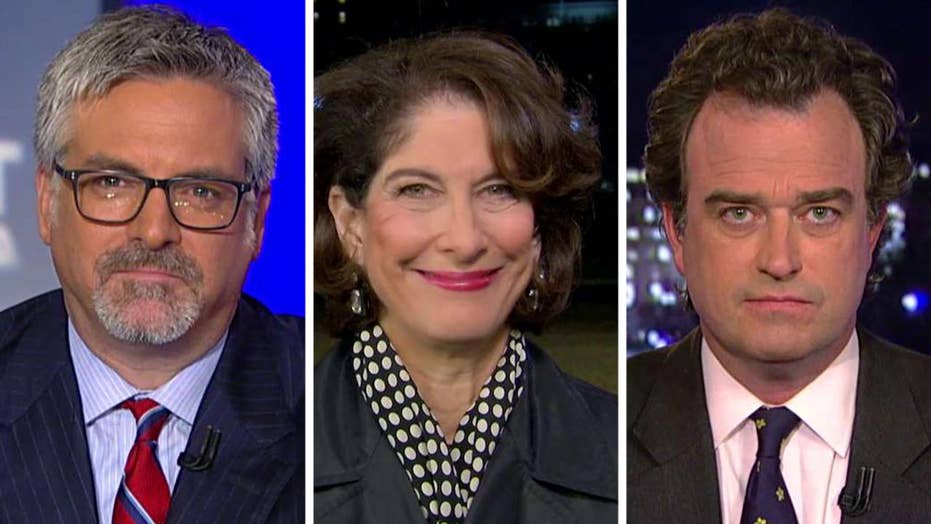 The timing of Sessions's Mueller interview

This is a rush transcript from "Special Report with Bret Baier," January 23, 2018. This copy may not be in its final form and may be updated.

UNIDENTIFIED REPORTER: Are you worried about what the attorney general told the special counsel?

TRUMP: No he didn't at all, not even a little bit, no. And he's going to do a good job.

UNIDENTIFIED REPORTER: The president said today that Director Wray did not threaten to resign. How does he know that?

WHITE HOUSE PRESS SECRETARY SARAH SANDERS: I guess that would be based on conversations that he would've had with Director Wray.

UNIDENTIFIED REPORTER: Does he think there needs to be a staff shake-up at the FBI?

SANDERS: Look, we have 100 percent confidence and Director Wray. And if anybody is going to make that decision, it will be the director, and we're going to leave that in his hands to decide whether or not he feels that there need to be changes made.

BRET BAIER, ANCHOR: Not even a little bit the president said in the Oval Office today about the FBI director threatening to resign. That comes from an Axios piece from Jonathan Swan last night, "FBI director threatened to resign amid Trump-Sessions' pressure." Also comes as we learn that the attorney general and the former FBI director Jeff Sessions and Jim Comey both interviewed and talked with special counsel Mueller, Sessions in recent days, Comey last year. The New York Times on the Comey interview, "The Interview with Mr. Comey focused on a series of memos he wrote about his interactions with Mr. Trump that unnerved Mr. Comey." Mueller obviously following the collusion investigation and possibly obstruction of justice, but this all is released and comes out on a day in which these text messages between FBI agents basically dealing with the investigation are really raising some eyebrows on Capitol Hill.

Let's bring in our panel: In our Washington bureau Steve Hayes, editor in chief of The Weekly Standard; Charles Hurt, opinion editor for The Washington Times, and with me here at the White House Mara Liasson, national political correspondent of National Public Radio. First to the Sessions interview. The president says he's not worried about it. But five hours potentially is what we are hearing. That's a lot of questions.

MARA LIASSON, NATIONAL PUBLIC RADIO: That's a long time. That's a long time. And it sounds like Mueller is pretty interested in the possibilities of obstruction. What did Comey think about his conversations with the president? Does Sessions know anything about the circumstances surrounding Comey's firing?

BAIER: Charlie, what about the timing on all of this? Take a listen to Senator Johnson about this investigation about the text messages and all that's coming out just in the past couple of days.

SEN. RON JOHNSON, R-WIS.: A secret society, we have an informant that's talking about a group that was holding secret meetings offsite. There is so much smoke here, there's so much suspicion.

BAIER: And you have an informant saying that?

BAIER: Is there anything more about that?

JOHNSON: No. We have to dig into it.

BAIER: Has to dig into it, Charlie, but obviously this investigation and the fact that you have five months of these text messages missing is raising red flags up on the hill.

CHARLES HURT, WASHINGTON TIMES: Yes, it's to the point that it truly strains credulity, and especially when you have things like that text message about the secret society and then before that, the text message about needing an insurance plan in case the unlikely event Donald Trump actually wins. There are some really, really strange things going on here, a lot of unbelievable questions that need to be answered.

And I think when somebody like Trey Gowdy talks about how we're not even talking at this point about anybody going to jail or anything like that, I don't know why he would say something like that. I get it. I want all this to end. I want all of this not to have happened. But some seriously screwed up things have happened and we need to get to the bottom of all of it. And I hope people at the FBI and DOJ who are culpable for some of this are terrified.

STEVE HAYES, THE WEEKLY STANDARD: I think Trey Gowdy is somebody who usually waits for the evidence to draw his conclusions. I suspect that's what he was doing with that comment. But it's telling to me that Trey Gowdy has been outspoken as he has about these recent revelations. He has been a sober minded judge on these matters and has given every benefit of the doubt to the FBI and the Mueller investigation that he possibly could. But these things are troubling. The continued bias that we've seen through these text messages has to be troubling to anybody who believes in the fair application of the law.

And if you look at the kinds of things that have emerged in the past couple of days and then marry them with what we have learned before, it's very clear that these were not just the private views of this couple having an affair. There was discussion about taking those private views and acting upon them in the public service, in the duty that Peter Strzok had as a public servant. That is where you have I think real problems, and this begs for additional questions to be answered by the FBI, by the DOJ, by those two in particular. These are real questions. This is a legitimate, substantive issue.

REP. JOHN RATCLIFFE, R-TEXAS: When you look at these texts in the aggregate, it shows more than just an extreme level of intent bias and hatred against Donald Trump and for Hillary Clinton. It shows a manifest intent to act upon that bias.

REP. TREY GOWDY, R-S.C.: What's also troubling to me is this text Johnny Ratcliffe found last night about this secret society. I have no clue what that means because that was not the phraseology I used. But it's the day after the election, and it's the same two people that were discussing a little bit later in the text the damage they had done with the Clinton investigation and how they could, quote, "fix it" and make it right.

BAIER: Listen, Mara, we don't know what we don't know about the Mueller investigation. I say that all the time because it's true. But this doesn't look good.

LIASSON: It doesn't look good and I'm sure it's going to be investigated. Eventually we are going to see all the emails that still exist, but there's also something else going on here --

BAIER: You mean the text messages.

LIASSON: The text messages, that's what I meant, the text messages. I've got emails on the brain. The guy who wrote them was removed by Mueller as soon as he learned about this in the summer. And a lot of this is part of undermining Mueller's investigation, making it look like it's just a partisan witch hunt so that whenever he comes up with can be easily dismissed.

BAIER: But you don't have concerns about the substance of what they're saying?

LIASSON: Yes, I do have concerns about the substance, but I think the reason that a lot of Republicans are harping on this is because they want to make sure that when Mueller finally does finish his report that they can say this was just partisan. I think as a long-term strategy, not a good idea to undermine the Department of Justice and the FBI.

BAIER: Charlie, your response to that?

HURT: I don't think any Republicans over in Congress are going to stick their neck out to protect this president in any sort of unjust way. That strikes me as absurd. I do think that these issues are just, it is shocking. And I think people's outrage in Congress is very much well- founded.

And when you stop and look at the whole Trump election in the first place, this is all -- these are all the reasons why so many people came out for Trump in the first place. It's not that he was a perfect person or a perfect candidate or a perfect whatever. It was that he was going to come in here and drain the swamp or whatever phrase you want to use. This sort of proves all of that. It's not only as bad as he said it was. It was even worse then he said it was.

BAIER: Steve, quickly, on the other friend is this Nunes memo which is four pages boiled down from I think thousands of pages dealing with FISA and what is believed to be allegations of serious abuse in FISA warrants. We don't know if that's going to come out, but Democrats pushed back and say this is a distillation by Republicans. It seems like the text messages right now are crossing more of a bipartisan concern than the memo itself.

HAYES: That's true. And I think Democrats and many in the media are skeptical because there's been this concerted effort to get that memo released. But it's interesting to me that Democrats are primarily challenging Devin Nunes on process rather than on the substance of what his memo says. Maybe that's because some of the memo is still classified and they feel like they can't talk about it. But I would think if there were a substantive attack to be made, Adam Schiff is no weak-kneed attack dog. He likes to go after Devin Nunes. He's done a lot of that over the course of these investigations. One suspects that there was some more substantive attack, a way of discrediting it, that he might be leveling it.

BAIER: And 10 seconds. It seems like the White House is inclined to release it.

LIASSON: They're inclined to release it and I think it will be released.