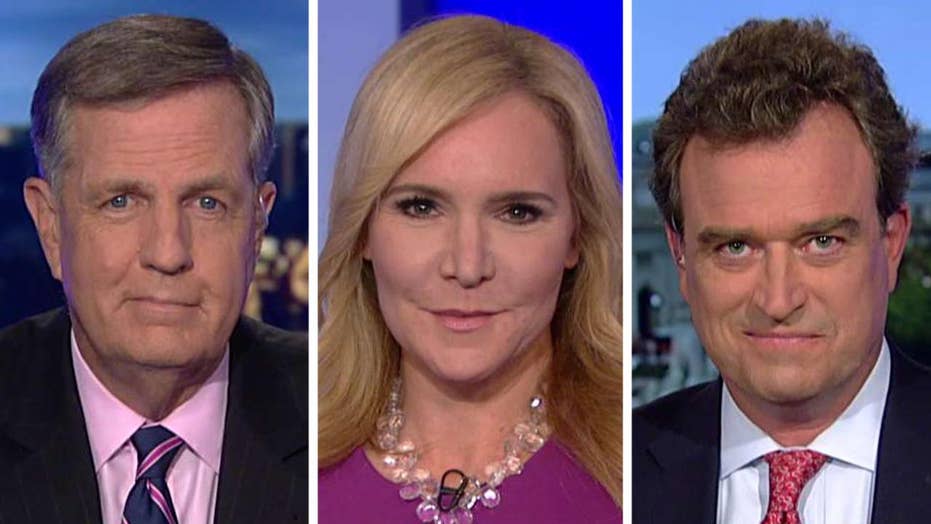 The politics of President Trump's immigration deal with Mexico

Critics claim details of the agreement were already in place; reaction and analysis from the 'Special Report' All-Stars.

This is a rush transcript from "Special Report with Bret Baier," June 10, 2019. This copy may not be in its final form and may be updated.

PRESIDENT DONALD TRUMP: It was all done because of the tariffs and because of the relationship that we have with Mexico. I spoke with the president yesterday. We had a great conversation the other day, and I think you're going to see some real action.

MARCELO EBRARD, MEXICAN FOREIGN MINISTER (through translator): After very intense negotiations, we agreed on two measures, one of ours, and one of theirs. And we agreed upon a deadline to do things and see who is in the right. The Mexican National Guard is going to cover the entire national territory and the southern border. That is not derived from the agreement with the United States. That was already established.

BRET BAIER, ANCHOR: President Trump today and the Mexican foreign minister talking about the same thing in different ways, the deal with Mexico and what came out of the weekend after Friday's negotiations. We'll start there with our panel, senior political analyst Brit Hume, A.B. Stoddard, associate editor at Real Clear Politics, and Charles Hurt, opinion editor for "The Washington Times." OK, Brit, bottom line, it's happening. The question is, is it new, does it make a difference, and does it change the dynamic on the border?

BRIT HUME, FOX NEWS SENIOR POLITICAL ANALYST: Certainly, the things they've been talking about, but Mexico clearly has agreed to accelerate some things and make them larger than they were before, and that obviously is in response to the threat of tariffs. It is obviously in Mexico's interest to play this down and say we're going to do this anyway, and it's very much in Trump's interest to say this is a huge deal and I extracted it from them by virtue of my threat of tariffs. But he's made some headway with them. I don't think there is any doubt about that.

BAIER: Here is the secretary of state and the vice president from earlier in the show.

MIKE POMPEO, SECRETARY OF STATE: I've seen some reporting that says that these countless hours were nothing, that they amounted to a waste of time. I can tell you that the team here at the State Department believes full- throatedly that this is an important set of agreements, important set of understandings.

BAIER: So A.B., how does this play on the hill?

A.B. STODDARD, ASSOCIATE EDITOR, REAL CLEAR POLITICS: The problem is people don't feel comfortable with the outcome. The president threatened the tariffs again today, and the reason is that the third safe country -- this asylum provision that the administration wanted and did not get from the Mexican government, is not yet -- it's in play potentially for the future but it's not in place as part of the agreement. President Trump has told us in a tweet and then in his comments that it is. But it is not. They'll revisit this in 45 days.

But Republicans are very concerned that the tariff threat can come back. The reason is that in 45 days without this asylum agreement the Mexicans have said maybe we'll put it in if things aren't going well enough. But they don't have it now, and so there is definitely the potential as the president says these measures weren't strong enough. The crossings are too high, too many of them, and threatens tariffs again.

And so people just don't feel that the USMCA, the new NAFTA, is still solidly on track after this, and that it's a real deal that gets rid of the tariffs.

BAIER: And then there is the question about the asylum law and the administration -- you saw the vice president, the president, others calling for Congress to change the asylum laws when it deals with Central Americans.

CHARLES HURT, OPINION EDITOR, "WASHINGTON TIMES": Because clearly, obviously what we have seen over the past several months and years has been an uptick of migrants using our legal system against us, using our asylum laws against us in order to get across the border and endanger a lot of children in the process, which is another reason why I think that the whole thing is so important.

But the idea that the remain in Mexico part of the asylum deal, that's a big deal. That handles a whole lot of the problem of at least not just releasing people into the country. But there is so much attention has been on whether or not it was Trump's threat of tariffs that brought about this deal. The bottom line is Donald Trump made a promise to do something on the border, to do something like this. He's the first politician to successfully win an election on these promises. He's keeping his promises, and he has been willing to sort of think outside of the box to try to achieve a real fix that Congress has ignored for 40 years.

BAIER: Meantime, the president is also threatening more tariffs on China. Here he is on Squawk Box this morning.

BECKY QUICK, CNBC ANCHOR: If President Xi doesn't come, will that mean that the tariffs on China for the additional $300 billion in goods go on immediately?

DONALD TRUMP, (R) PRESIDENT OF THE UNITED STATES: Yes, it would. He's for China. I'm for the U.S., and we're going to have our differences. But I think the differences can be worked out very easily.

BAIER: But there seems to be this growing confidence in the president the way he talks about it that somehow China is going to move. But there isn't yet indication from the Chinese that that is actually happening.

It's often said of him that he's a warmonger and he's going to get us into this war or that war, he's going to go to war with Iran -- that's another place, by the way, where economic sanctions are in place. Actually, classically, sanctions are what you go to when you're trying to solve something without going to war, without military action. So he's doing this in all kind of places. There is a reason why he calls himself tariff man.

But it's not at all clear that he's going to get the deal with China that he would like. It would certainly be a feather in his cap if he did. And it would be similarly so if he were able to do that with North Korea. We don't know yet. And we've got a year-and-a-half to an election, and it's all out there, and it could go either way for him.

There was a story in "Axios," A.B., about concern in the business community that the tariff power, that the ability to affect trade in this way should somehow be clawed back by Congress. Do you sense that on Capitol Hill?

STODDARD: Oh, yes. After the midterm elections Republicans became much more vocal about this, and this tariff threat really rattled them. And so they've made it clear to the administration. You heard it from Senator Chuck Grassley, the chairman of the Finance Committee. The minute this threat was made two Thursdays ago, he said this is a misuse of tariff authority and it runs counter to Congressional intent. And they mean, with the support of the business community, to stay on offense with the president about this because, as I said, they're not comforted since what they heard Friday night that the tariff threat is not coming back.

HUME: What strikes me about this is, I understand their desire, and they may even be right about this. But what are they going to do? Are they going to court? That might work. Are they going to pass a bill that he would sign that would claw back their authority? I don't think so. And if there is a bill and he doesn't -- he vetoes it, I don't see them being able to override that. Do you?

STODDARD: They don't have their math at this time, they don't have their numbers, but you can see the evolution from after the midterm elections to now. The government shutdown, the threat to close the border, the national emergency declaration, and now a threat of tariffs against Mexico that they know is returning, they're more fired up about this. he said, they might not have veto override numbers, but they intend to do something. They want to keep their Senate majority. Several of them are running for reelection in places where they really stand to lose if he threatens tariffs on Mexico in the middle of next year.

BAIER: But on the flip side, if the Mexico situation works out, if China comes back to the table, if Iran, I don't know, somehow negotiates, if you start seeing things on the positive side from these efforts, does it change the dynamic?

HURT: Also, that's why this whole debate about whether it was the threat of tariffs that brought about this deal in Mexico is I think sort of moronic, is the fact that, are you kidding? For the past two years all Donald Trump has talked about is using tariffs. He loves tariffs. He wants to use them to get everything solved. And so the idea that the Mexican government wasn't aware that was sort of in the offing is absurd.