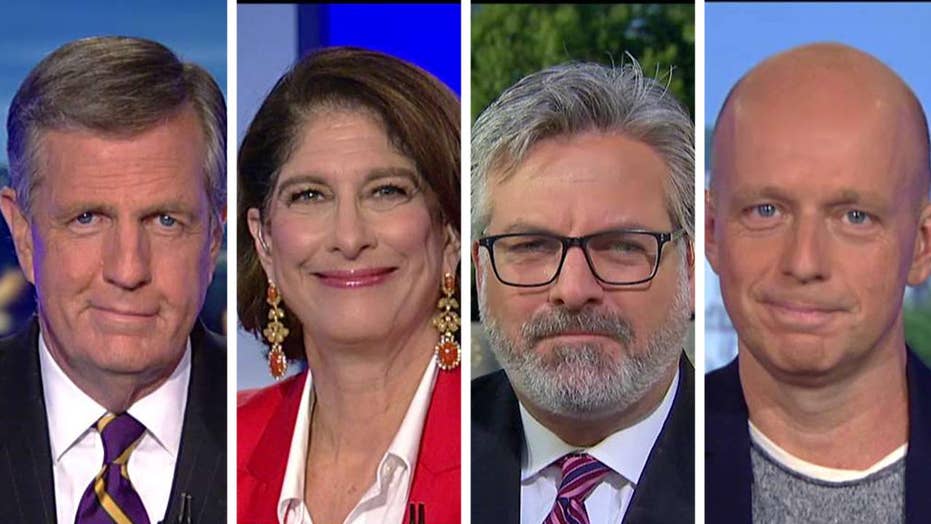 The politics of filling a Supreme Court vacancy

This is a rush transcript from "Special Report with Bret Baier," July 9, 2018. This copy may not be in its final form and may be updated.

SEN. PATTY MURRAY, D-WASH.: Republicans are already trying to downplay the reality that this pick could undermine women's reproductive rights or protections for pe-existing conditions.

SENATE MINORITY LEADER CHUCK SCHUMER, D-N.Y.: No one has been more dedicated to the enterprise of building a Supreme Court that will overturn Roe v Wade then the Federalist Society's Leonard Leo.

SEN. RICHARD BLUMENTHAL, D-CONN.: This next nominee will be the swing vote to overturn Roe v Wade.

SENATE MAJORITY LEADER MITCH MCCONNELL, R-KY.: We can expect to hear how they will destroy equal rights or demolish American health care or ruin our country in some other fictional way. This far left rhetoric comes out every single time, but the apocalypse never comes.

BRET BAIER, ANCHOR: Under three hours away from the president's nominee as he rolls that choice out, we may find out something beforehand, but let's ask our panel: from the Washington bureau, Fox News senior political analyst Brit Hume; Mara Liasson, national political correspondent for National Public Radio; Steve Hilton, former adviser to British Prime Minister David Cameron at host of "The Next Revolution" here on Fox News Channel, and joining me here at the Supreme Court, Steve Hayes, editor in chief for "The Weekly Standard."

Steve, we'll start with you. Thoughts of this process as we whittle down to really four, but it sounds like he was at two and then made the decision today.

STEVE HAYES, THE WEEKLY STANDARD: This has been a preview. What we've seen, what you played in the introduction is exactly what we've seen from Democrats. And I think the hysteria you are seeing from Democrats about what is in all likelihood if it's one of the four we have been talking about is a mainstream conservative choice I think will not do them well.

I think listening to some of the discussions on some of the other networks, the hysteria about Donald Trump choosing a nominee so that he can get beneficial rulings on the Supreme Court, it's gone so far beyond what we should be discussing about in terms of the nominee, particularly when we don't even know who the nominee is yet. So the hysteria we've seen, I fear, is foreshadowing of the hysteria we are about to see.

BRIT HUME, FOX NEWS SENIOR POLITICAL ANALYST: I agree entirely with Steve. I think this is going to be as bad if not worse than anything we've ever seen on this subject, and we've seen some nasty fights in the past. I've covered several of them myself. The language, the soundbites you played there, Bret, are not nearly the strongest soundbites that I heard from the people that we heard from there talking about the Federalist Society as being an extreme rightwing group. It's certainly not. The suggestion that the 25 nominees on the list are all extremists. They're not. But this is how that's get going.

BAIER: Mara, what about the choice and defending the choice? We heard that Mitch McConnell made a case to the president saying that two of the choices were a little bit easier to get through and he would prefer those?

MARA LIASSON, NATIONAL PUBLIC RADIO: Right. Mitch McConnell has sounded very optimistic that he could confirm any of the top four choices but that Brett Kavanaugh because he had a very long paper trail, he's been on the bench a lot longer, he also has a long association with the Bush family and he was involved in a Ken Starr investigation, in other words, there's just a lot more paper to go through, so that might be harder. And other ones, may be Judge Hardiman or Kethledge are a blanker slate.

But the point about the dueling charges of extremism, extremism is in the eye of the beholder, but nobody would have been on that list of 25 judges if they weren't somebody that conservatives felt comfortable with either undermining or overturning Roe v Wade. Donald Trump said during the campaign that's what he's going to pick a judge to do. He said I'm going to put pro-life judges on and that decision will go back to the states.

BAIER: And Steve Hilton, that is what Republicans say. They say elections have consequences and these are those consequences.

STEVE HILTON, FOX NEWS: That's exactly right, and I think the Democrats, this is a really long-term change of strategy that needs to come because for many years now, the Democrats are the party of lawyers. They are funded by lawyers. Many of their elected officials are lawyers. And so it's no surprise that they have chosen to advance their political goals in recent decades through the law, through lawsuits in the courts.

It looks like that's going to have to change. And I was really interested a liberal columnist in The New York Times this morning, David Leonhardt, pointed out that from now on the Democrats are going to have to do democratic with a small d politics, actually try and get elected, win state legislators, advance their goals through the democratic process rather than the legal one. It's no wonder then that they are so fired up about this because it's a real change from how they've operated for many years.

BAIER: Take a listen to Senator Dick Durbin talking about the process and the pushback Democrats will give throughout this process even if there's an election pending.

SEN. DICK DURBIN, D-ILL.: The men and women that I have worked with on the Democratic side really take this seriously. They understand it's an historic decision. It's about more than the next election. It's about what country the United States is going to chart is the future in this course. I think each and every one of them take that seriously, that personally. It goes beyond the next election.

BAIER: He's not running in one of these red states. There are 10 senators up for reelection in states that Donald Trump won. Of those, five Senate Democrats are up for reelection in states that Trump won by more than 15 percent in 2016. You can see the list right here. Steve Hayes, they were all invited, we're told, to the White House. They all turned down that invite today. It's tough for some of those folks to go home if they vote against one of these picks.

HAYES: Particularly if they voted for Neil Gorsuch as was the case for a few of them. This is going to be a hard argument for Democrats in red states to make. There has been a deference provided to the picks of the president, either cabinet picks, Supreme Court picks, going back historically. And if you are going to vote against the president you have to have a pretty good reason to do it.

I think some of the discussions we are hearing back and forth on Roe v. Wade and looking at some of the records, I would love it if there were that kind of a substantive, issue-based debate. I just think we are unlikely to see it. I think what Brit said is exactly right. You are likely to see charges and personal attacks that are the kind of attacks that are difficult if not impossible for the nominees and for the administration to answer because they are either made up out of whole cloth or so exaggerating a part of the nominee's record that that's what the fight will be about.

HUME: And Bret, that soundbite that you played from Dick Durbin illustrated perfectly what Steve was talking about, Steve Hilton was talking about, which is that the Democrats set so much store by the actions of the courts in this country because through the courts they have been able to achieve goals they couldn't through normal legislative processes. And they clearly at this stage are not prepared perhaps to go back to a process where they can't rely on the courts to come through for them time and time again, achieving results that they could not otherwise democratically.

BAIER: Is there a nominee, Mara, who any Democrat can feel comfortable voting for besides Merrick Garland?

LIASSON: Is there a nominee that Donald Trump would put up?

LIASSON: Looking at that list of 25, which the president said this was the pool that he was going to choose from, I don't see anyone there that wouldn't raise the same objections from Democrats.

BAIER: I'm going to try very, very hard to pin you down. Steve Hilton, first to you, which of the four that we think we know about do you think is going to be?

HILTON: I know you were going to do that. I'm going for Kavanaugh.

HUME: I don't do predictions.