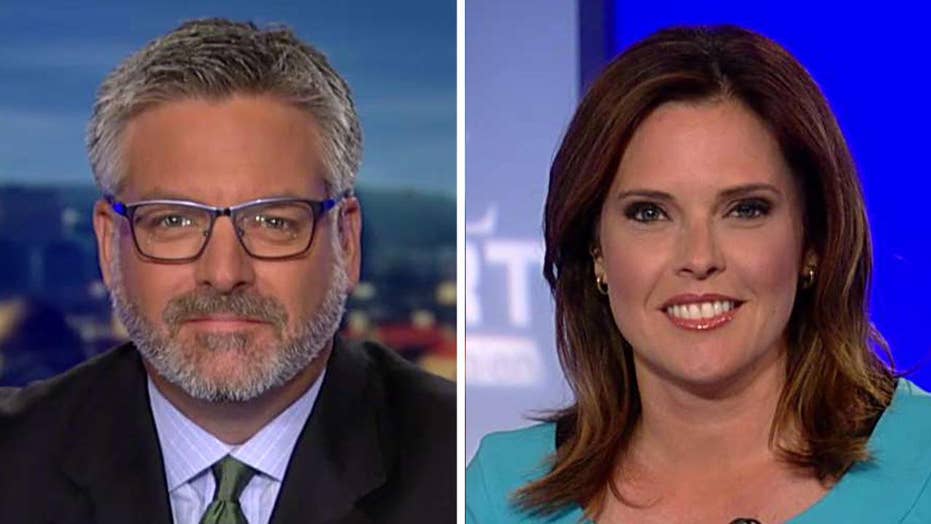 This is a rush transcript from "Special Report with Bret Baier," July 11, 2017. This copy may not be in its final form and may be updated.

DONALD TRUMP JR., PRESIDENT TRUMP'S SON: My takeaway when all of this was going on is that someone has information on our opponent. And this is 13 months ago before I think the rest of the world was talking about that, trying to build up this narrative about Russia. So I don't even think my sirens went off or the antennas went up at this time because it wasn't the issue that it has been made out to be over the last nine months, 10 months.

SEN. LINDSEY GRAHAM, R-S.C.: On its face this is very problematic. We cannot allow foreign governments to reach out to anybody's campaign and say we would like to help you. That is a nonstarter.

SEN. TIM KAINE, D-VA.: We are now beyond obstruction of justice in terms of what is being investigated. This is moving into perjury, false statements, and even potentially treason.

BRET BAIER, ANCHOR: Some of the reaction as you heard Donald Trump Jr. speaking with Sean Hannity. We will have another clip of that in just moments. He speaks tonight at 10:00 p.m. But this is all over an email chain that Donald Trump Jr. released himself today hours before we expect "The New York Times" had a story about that very email chain.

In these emails it talks about setting up a meeting June 9th, 2016, Rob Goldstone, a publicist, to Donald Trump Jr., "The Crown prosecutor of Russia met with his father Aras this morning, in their meeting offered to provide the Trump campaign with some official documents and information that would incriminate Hillary and her dealings with Russia and would be useful to your father. This is obviously high-level and sensitive information but is part of Russia and its government's support for Mr. Trump helped along by Aras and Amin. What do you think is the best way to handle this information, and would you be able to speak to Amin about it directly?" Amin has another contact through the Miss Universe with the Trumps. "I can also send this info to your father via Rhona," that's Trump's assistant at Trump Tower, "but it is ultrasensitive so wanted to send to you first."

Donald Trump Jr., "Thanks, Rob, I appreciate it. I'm on the road at the moment but perhaps I should speak to Amin first. It seems we have some time, and if it's what you say, I love it, especially later in the summer." It goes on and sets up this meeting. This is the lawyer they met with, June 9th, she spoke to NBC this morning.

UNIDENTIFIED MALE: What was the purpose of that meeting?

NATALIA VESELNITSKAYA, RUSSIAN LAWYER (through translator): I never knew who else would be attending the meeting. All I knew that Mr. Donald Trump Jr., was willing to meet with me.

UNIDENTIFIED MALE: They had the impression it appears that they were going to be told some information that you had about the DNC. How did they get that impression?

VESELNITSKAYA: It's quite possible that maybe they were looking for such information, they wanted it so badly.

BAIER: She went on to say that she did not work for the Kremlin, that's what she told NBC.

Let's bring in our panel, Steve Hayes, editor in chief of "The Weekly Standard," Mercedes Schlapp, columnist for the "Washington Times," and Jonathan Swan, national political reporter for Axios. Jonathan, welcome back. Your thoughts, reaction from the White House and what you're hearing?

JONATHAN SWAN, NATIONAL POLITICAL REPORTER, AXIOS: So the White House internally, there's really two trains of thought, and they're both happening simultaneously. One is, who leaked this?

SWAN: What the view is internally is the first on the last stories were probably linked by opponents of theirs, possibly people in the intelligence community. It's the second story by "The New York Times" that sites three advisors to the White House. That's the story that everyone is focused on, and they're wondering who are these people.

And of course there's a view internally that once the first thing is out there, there's then a race to burn your rivals, cover your back, and that opens up all sorts of possibilities. So it's created this atmosphere internally when no one trusts anyone. They're all throwing out names, discussing could it be this person, could it be that person. People are opening up all the factions internally, and they're blaming people outside as well. So it's a crazy environment there.

As for the substance of it, they don't even try to pretend this is not bad. Privately they are saying this is a really bad story, it's terrible. The one thing they do say, though, is there is no crime. This is a perception problem, not a crime problem. So that's the line that there sort of testing out. And I just say point number three is I would expect them to turn this on Obama. That's what I'm already hearing internally is saying the real story is Obama's unmasking in intelligence, and that comes from the very top. Donald Trump himself says that.

BAIER: The political problem, Mercedes, is what White House aides and Donald Trump Jr. himself had said previously about efforts to meet with Russians, no efforts on collusion, on any effort to take down Hillary with the Russians, and that's the problem in this case, is that right?

MERCEDES SCHLAPP, "WASHINGTON TIMES": There are several problems, that being one of them, in terms of them saying that they don't recall having these meetings with Russians and this happens. So it brings up a second question which I'm hearing out the legal community, which is, is there a chance that there's more of these meetings? Are there more contacts out there that they, the campaign, had with the Russians?

My question is, where was the campaign lawyer during this process? In terms of when you're in a campaign, your campaign lawyer is critical in helping to vet a lot of these meetings, for example. I think the mere fact that it was such a decentralized campaign with the family members running it to a certain extent it creates a bit of a disservice because of the fact that they are not understanding that there could be a legal ramifications for the actions they've taken.

BAIER: Understood that, but if Paul Manafort goes to that meeting, as campaign manager, he has decades of experience in politics, Jared Kushner is a different story as far as political experience. But they are in that meeting, they have to know something before they get in the meeting, right?

SCHLAPP: That's what it appears at this point, but I do believe that they didn't know what they didn't know. They thought that this -- they believed that this was going to be a meeting to figure out if there was information on Clinton. When you look at it from a legal perspective and you look at the cases out there, for example Bluman versus the FEC, it really does restrict what foreign nationals can do, which is spending money or spending number on candidates or express advocacy.

So I think from a legal perspective Donald Trump Jr., is probably in a better spot. But the question becomes that the Democrats are now pushing this narrative of treason where I think they are overplaying their hand, Bret. I don't think that's where they should be going because, at the end, I just feel that Donald Trump Jr., and the team didn't necessarily know that this could create a problem.

STEVE HAYES, EDITOR IN CHIEF, "THE WEEKLY STANDARD": The story here is not President Obama, it's not the deep state, it's not the media, it's not the Democrats. It's Donald Trump Jr., and these emails. This doesn't require interpretation. This isn't coming through the filter of "The New York Times." The emails say what they say.

This is one of those moments where we have to stop and think, are we really having a debate in this country in Washington about the propriety of the son of a presidential candidate, a leading presidential candidate, meeting with representatives who he thought were of a hostile foreign power for the purposes of winning an election, and we have to have a debate about whether that's proper or not? That's an incredible moment in our history that we are having this debate.

I think you are right on the legal question, Democrats are overplaying their hand. There is some question talking to some lawyers today about whether he would be in legal jeopardy or not, probably not. But that seems to me to be a different debate and it almost misses the point of what we learned over the past three days. Remember, just three or four days ago story from the Trump campaign was no contacts. Then the story was a harmless meeting about adoptions. Then the story was a meeting to get information about Clinton. Then the story after that was a supposed representative of the Russian government coming to provide this information so Trump could win an election. That's an incredible moment.

SCHLAPP: Even worse she was working for Fusion GPS, a private contractor, it's the group that released the dossier. And then you have to ask yourself a question, how did she get a visa? There's all these other questions that I think need to be asked, and actually Fusion GPS is stonewalling the congressional investigation right now. So I think those are a second set of questions that need to be asked.

BAIER: You were going to finish her point, sorry.

HAYES: The Fusion GPS, there are questions there. We should get answers to questions I think through the investigations, either the congressional investigations or Bob Mueller's. We will get answers to those. But the fact of the matter is she represented herself, Mr. Blackstone represented her as a Republican Party of the Russian government -- Goldstone -- of the Russian government, and Donald Trump Jr., took the meeting with the intention of colluding. I think that is the problem here. That's the big takeaway, whatever all of the rest of this is.

SWAN: I think talking to people one of the biggest problems is the credibility gap that opens up now because their line has been, as Steve pointed out very recently, this whole thing is phony. There's nothing to it. In fact it's not only fully, it's ridiculous that you would even suggest that we knew any Russians or dealt with any Russians.

And then we have this amazing timeline now where you have the email dated June whatever it was where he heard that this was the Russian government, and then a month later you have Don Jr. on television with Jake Tapper on CNN saying this whole thing is ridiculous.