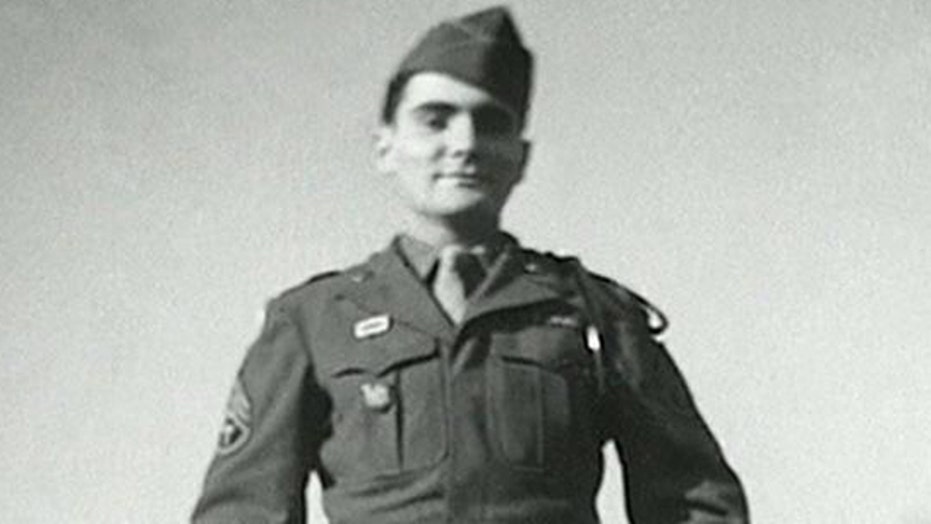 This is a rush transcript from "The Kelly File," November 28, 2013. This copy may not be in its final form and may be updated.

MEGYN KELLY, HOST: Well, the World War II Memorial in Washington, D.C. opened in 2004 and quickly became one of the most popular stops in a city packed with museums and memorials. We recently went to visit the memorial and had the privilege of meeting a World War II veteran by the name of Major Gerald Geiger.

KELLY: You were actually a prisoner of war?

KELLY: And how did you get out?

GEIGER: Well, we came under fire. And my guards ran and I ran the other way and I popped on. It played like it was there -- they came back looking for me, maybe they think I'm dead. And they didn't come back and I made my way back to my troops. On the way I found some weapons and I ran into some Germans and I captured them.

GEIGER: So anyhow. You've got to be young to do that.

KELLY: You're looking pretty good. All these decades later do you remember it well?

GEIGER: Like it happened yesterday. Some things you never forget. It's a film strip right in front of you. Right in front of me. It's like it's alive and in Technicolor and it's always there.

KELLY: What does it mean to you?

GEIGER: What it means, it means that I did -- my life was worth it. I didn't waste my life. I served my country. That's the most important thing, is to serve my country. And I did that and I'm grateful for the opportunity to have served.

KELLY: What did it feel like to be living in this country at a time when it was so united and the country was behind you?

GEIGER: I could write you a book about that. It was -- we were all one, you know. And we wanted to learn. And we were eager to learn and to apply the knowledge. And nowadays I notice maybe some people are no longer that willing to learn from the older generation. It's a generational thing, you know. But we didn't have -- we didn't have this smart-ass attitude. We were willing to learn, and we learned. And we have respect for our parents and we obeyed. When mother called me, I came or else.

KELLY: When you see, for example, the stars on this Freedom Wall, each one meant to represent 100 deaths in World War II, I mean, for you those were actual friends. Those were buddies.

GEIGER: Oh, yes. Of course. I have their pictures. Of course I remember them. And I've written a legacy for my grandchildren. And all these people are in there. The pictures and the names and everything. And I have the yearbook. So these people are all alive with me, and I'll never forget them. And these are the heroes, you see. The heroes are the ones we couldn't bring back. And the heroes are the ones who are in wheelchairs now. The rest of us are survivors. I'm not a hero. I'm just a survivor.

GEIGER: He did his duty. He served his country. That's all.

KELLY: Major Geiger, thank you so much, sir. Pleasure.

KELLY: Thank you for your service.

GEIGER: God bless you. See you next time.

KELLY: God bless him is right. Telling me Mavon, which is the Irish pronunciation of Megyn. It wasn't an accident that he went that way.

Joining me now, Tom Beaty, who's the managing director for a Witness to War, a foundation that documents and records first hand stories from combat veterans. And we can certainly see why you've chosen to do that. I mean, just meeting folks like the Major makes you stop and realized and lament the fact that there will come a time on this earth sadly in the not too distant future where we are no longer able to talk to these guys one on one.

TOM BEATY, WITNESS TO WAR MANAGING DIRECTOR: Absolutely. We're losing our World War II veterans at a rate of about one every 90 seconds. And our mission is essentially to capture those stories before they're lost forever.

KELLY: When you, I mean, as somebody who's immersed himself in doing this, you know, near full-time, what do you take away from them? From our first two guests we heard that it's like a film strip, it's like a movie, you know, to think back on what happened, and both of them talked about wanting to be remembered for their sacrifice and understanding that their life was worth something.

BEATY: Well, one of the things I want to assure Dr. Heilman and Major Geiger is that there are younger folks who care. We've got a whole foundation and a team of volunteers that are focused on capturing these stories and our mission is essentially to make sure that future generations don't forget, that future generations have a place they can go on the web and actually hear the voices and hear the stories of what it was like to be there and the sacrifices and to really understand the price that was paid for our freedom.

KELLY: Yes. I mean, because they both talked about wanting the younger generation not only to know about their sacrifice but to learn from the attitude they had, the men and women who served us during World War II had.

BEATY: Well, there's no question that things have changed. And one of the things that I have enjoyed about meeting so many of these great World War II era veterans. And we've interviewed over 1,000 veterans, most of which are World War II. It is a different generation. There's just a level of respect and humility. And out of 1,000 gentlemen that I've interviewed, men and woman, I've yet to meet one that was arrogant or bragged about their deeds. They consistently are humble and just appreciative of the fact that they had that experience. Most of them wouldn't want to repeat it, but they certainly -- they're certainly glad they were able to do their duty.

KELLY: You know, that describes most of the men and women in military in general, even present day. But I want to ask you Tom, how you're preserving the stories but how will people be able to access them?

BEATY: Sure. Well, essentially, we perform video interviews with World War II, Korea, Vietnam vets and recently some Iraq and Afghanistan vets but our sense of urgency of course is around World War II and Korea. So, we perform these interviews in HD and we're moving to broadcast-quality video.

We give free DVDs to the families. And then we take those and professionally edit them and break them down to two to five-minute war stories. One of the reasons we do that is so they're more consumable for today's media-savvy generation. And we put them on a website, that's witnesstowar.org. And on that website we've got 3,000 or 4,000 video war stories essentially detailing the heroics and the humorous events and everything else that occurred over just an extraordinary bloody war.

KELLY: Good for you. Thank you so much. Thank you for doing it and thanks for coming on.

BEATY: It's an absolute honor to be here, and it's an honor to have had the opportunity to meet these gentlemen.