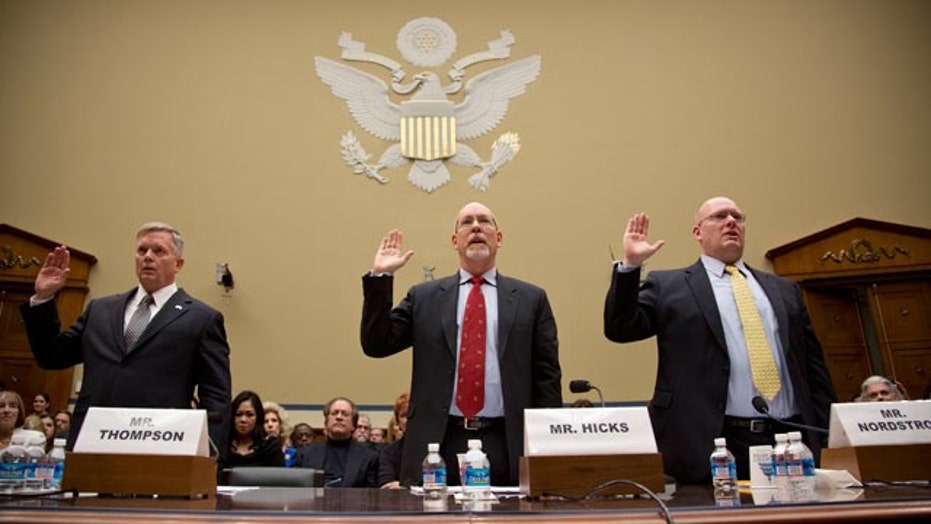 This is a rush transcript from "The Journal Editorial Report," May 11, 2013. This copy may not be in its final form and may be updated.

Riveting testimony this week from veteran diplomats about the deadly assault on the U.S. mission in Benghazi. Gregory Hicks, the deputy chief of mission in Libya, gave an emotional recounting of the night of September 11, 2012, the first public detailing from an on-the-ground official. His testimony draws new attention to the events surrounding the attack and how the administration handled its aftermath.

REP. TREY GOWDY: When Ambassador Stevens talked to you perhaps minutes before he died, as a dying declaration, what precisely did he say to you?

GOWDY: Did he mention one word about a protest or a demonstration?

GOWDY: So fast forward, Mr. Hicks, to the Sunday talk shows and Ambassador Susan Rice. She blamed this attack on a video. In fact, she did it five different times. What was your reaction to that?

HICKS: I was stunned. My jaw dropped. And I was embarrassed.

Dan, what's the single most important takeaway you had from this hearing?

DAN HENNINGER, COLUMNIST & DEPUTY EDITOR: I guess, Paul, it is that there is such a vast distance between what Gregory Hicks described as happening that night and what the administration described for virtually a week. What Gregory Hicks described was an intense, serious fire-fight in Benghazi, lasting all night, involving heavy weaponry. That's September 11th. On September 13th, Jay Carney attributes it this California YouTube video. Five days later, Susan Rice goes on television and says the same thing. And in fact, on the following Tuesday, September 18th, Jay Carney is still attributing this to a YouTube video. Why was the Obama administration trying to suppress the events that Gregory Hicks --

GIGOT: Your conclusion is, based on Hicks' testimony, that they were trying to suppress --

HENNINGER: You can call it whatever they want. They didn't want to talk about what happened in Benghazi that night.

JASON RILEY, POLITICAL DIARY EDITOR: Oh, and -- Hicks himself said during the testimony that he was pressured into keeping his mouth shut by State Department officials.

RILEY: The FBI did not talk to him during their investigation. This is about transparency, Paul. It's a national security failure. And it's transparency in the aftermath. That's the problem here. The -- much of the media, particularly the liberal media, wants to make this, oh, this is simple partisan bickering in Congress, same old, same old, let's move on. No, this is about a -- an administration not being forthcoming months after the fact about what really happened.

And one of the stunning things for me coming out of Greg Hicks' testimony was his commenting on the fact that when he was trying to talk to a visiting congressman, Congressman Chaffetz, from Utah, the State Department was concerned that there should be a lawyer present at all times present with him.

GIGOT: Hillary Clinton's -- former secretary of state -- Clinton's chief of staff, Cheryl Mills, who some of us remember from the --

GIGOT: -- with Bill Clinton, was with the person who called Hicks, according to his testimony, and said, "Do not talk alone to a member of Congress."

STEPHENS: Yes. And afterwards he also felt, as he put it, a chill from Beth Jones, another close aide to Secretary Clinton. You get a sense that here you have a kind of a failing, surrounding Secretary Clinton, for whom the first priority is make sure that our political bosses aren't touched in any way by a serious policy --

GIGOT: Wait a minute. Do you blame them? It's the middle of a presidential election --

STEPHENS: Yes, I do blame them.

STEPHENS: Because they're not campaign officials. They're State Department officials. And there are four dead Americans. That's a serious problem. That's an inability to separate their role as partisans and as -- as officials of the U.S. government.

HENNINGER: Well, bear in mind, as well, that, that night, Greg Hicks or his aides spoke to the State Department, describing what was going on. They talked to the Pentagon, Joint Chiefs, and they talked to the African command in Stuttgart, Germany, trying to get help. There was a wide array of senior officials in the U.S. government who at least knew what was going on there. And again, the question is, why did the administration --

HENNINGER: I think it's -- I think -- my answer is that the talking points were set in the White House, either by the president himself or one of his top aides, and then it forced everyone down below them to come up with these totally implausible accounts of what happened.

GIGOT: There's new evidence -- I want to get on the record, for our viewers, there's new evidence here that's come out reported by "ABC News" about the e-mail -- not the e-mail, the talking points which were distributed to the government as a matter of routine about what to say about something like this -- were altered 12 times, right?

STEPHENS: Right. And this is a highly important part -- point. Early on, we heard from Jay Carney, White House spokesman, that the talking points had all come from --

GIGOT: From the intel community.

STEPHENS: From the CIA, from the intel community. Now we're learning that various departments were getting in their equities, basically bureaucratic cover-ups where they didn't want to point out that CIA had been warning for months that diplomatic facilities and Western diplomats in Benghazi were under increasing threat. And so it was a classic case of bureaucratic and political cover-up leading up to Susan Rice's testimony on the 15th of September.

GIGOT: Frank Wolf, Congressman from Virginia, Jason, has been arguing for the House to put together a select committee instead of the five committees with disparate interests that are looking into this. Do you support that idea?

RILEY: I think it's a very good idea. And, look, they may come to the same conclusion as the committee that's already looked into this. We don't know. But an ambassador--

RILEY: Yes. But, yes, I think a bipartisan select committee. I think this does warrant that it rises to this level.

GIGOT: This review board never even interviewed Secretary Clinton, Dan? Do you understand that?

HENNINGER: It's impossible to explain. The FBI did not interview Gregory Hicks when they were in Tripoli. I do not understand that. And I think that's why -- we need a reboot of the national security agencies on issues like that. And they're one of the only mechanisms to do that is a committee of Congress, like they did under Watergate, looks into this, issues the report.

GIGOT: Dempsey, as well, chairman of the Joint Chiefs.