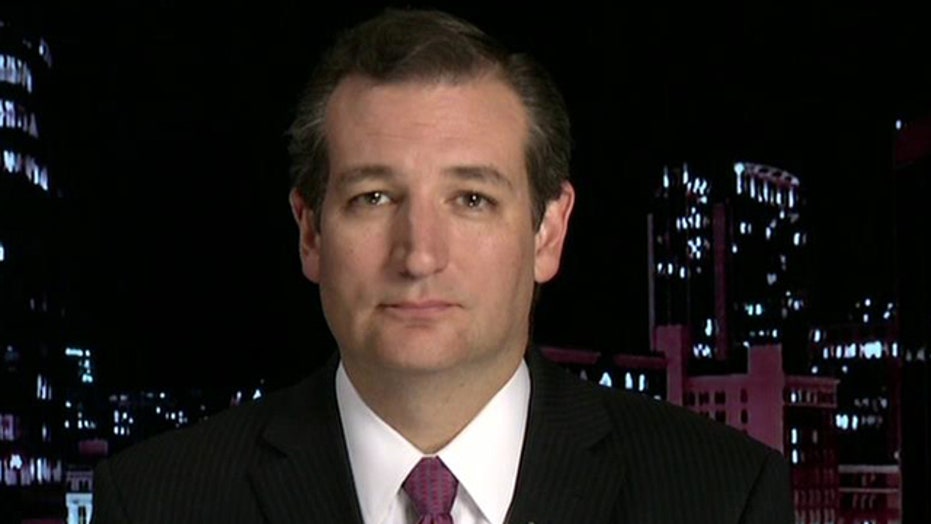 Ted Cruz: We are on the verge of a historic election night

Lawmaker's take on the midterm elections

This is a rush transcript from "Hannity," October 30, 2014. This copy may not be in its final form and may be updated.

SEAN HANNITY, HOST: And welcome back to "Hannity." And we continue tonight with our countdown to the 2014 midterm elections. Now, with just five days to go, new polls are now showing more positive numbers for Republicans in some of these hotly contested Senate races. Now, for example, in Colorado, Republican Cory Gardner -- he's up by seven points against the Democratic incumbent, Senator Mark Udall. And over in the great state of Arkansas, Republican Tom Cotton -- well, he has a 13-point lead over Democratic incumbent Mark Pryor.

Here now with his take on the state of the midterms is Texas Senator Ted Cruz.

SEN. TED CRUZ, R-TEXAS: Sean, it's always great to be with you.

You know, what I'm seeing on the ground is a lot of excitement, a lot of enthusiasm. I think we are on the verge of an historic election night next Tuesday. I think Republicans are going to retake the U.S. Senate. I think we're going to retire Harry Reid as majority leader.

HANNITY: What do you make -- even The New York Times today picked up on a point that I make, that in every election cycle, that when push comes to shove in a lot of these close races, that we often see the race card being used. We've seen it now being played in Georgia, and very specifically with a new super-PAC ad of Harry Reid, against Thom Tillis in North Carolina. How would you recommend that Republicans respond to that?  Because they're bringing up Trayvon Martin, Ferguson, Missouri...

You know, just a few days ago, as you know, Sean, the Democratic nominee for governor in South Carolina used a misogynist sexist insult for your and my friend, Nikki Haley. And -- and, you know, he tried to brush it off as he just misspoke, but you know, if you watch the video -- and I would encourage everyone to sit down and Google it and watch the video, you can see this Democrat running for governor laughing about it with the crowd, and then embracing it, embracing -- you know, if this were a Republican, if this were Todd Akin, it would lead the news on every channel all across the country! To have a Democrat use a nasty personal misogynist insult, and yet the mainstream yawns and ignores it -- we need to get rid of these kind of personal attacks. We need to instead focus on the substance.

There was a Politico article today, Senator, and I want to get your thoughts on it, that says that there is a civil war looming for the GOP if, in fact, they win. In other words, there are conservatives like yourself - - I'm a conservative -- that want a strong, bold agenda that might be facing an establishment Republican leadership that might be too timid.  You've experienced this firsthand. What do you expect if Republicans take control of the Senate? They have the House. What would you expect them to do?

Listen, if and when we retake the Senate...

HANNITY: Well, let me ask you this, though...

HANNITY: Mitch McConnell said, We will use the power of the purse to restrain executive amnesty. You're also an attorney. You were the attorney general of Texas. Do you believe, legally that -- and constitutionally, that you have the ability to stop executive amnesty if the president, which we're told is going to do right after the election?

CRUZ: Absolutely! And listen, it will be incumbent, if we have a majority, for Republicans to lead, for us to step up and do something with it. Look, we had a majority a decade ago, and Republicans didn't do much of anything with it.

I hope and believe that come January next year, with a Republican majority in the House and the Senate, we will see strong, bold leadership.  As you know, I laid out last week an aggressive agenda, 10 priorities for Republicans to focus on in 2015, an agenda to lead. It's up on my Web site, TedCruz.org, laying out exactly what we should do. We should focus on jobs and the economy and growth. We should focus on liberty and our constitutional rights. And we should focus on security, defending this nation.

And it's my hope that we see Republicans in Congress doing exactly that. And one thing you can rest assured is that is certainly going to be what I'm urging my colleagues to do is for all of us to stand together and present to the American people a bold, positive agenda, an alternative path that there's a better way than the failed Obama agenda.

HANNITY: Senator, how important this election cycle is -- the handling of Ebola, ISIS, Gitmo detainees, which we reported earlier that now have rejoined terrorist groups like ISIS, or not security the border, the problems on the border -- how big are those issues? As you've been traveling around the country in support of other candidates, how often are you hearing those issues come up?

CRUZ: Constantly, over and over an over again. And you know, there are really two things that are wrapped up in both of those issues. One is the incompetence of big government and the message from the statist left is government can do everything in your lives. And we're seeing the incompetence of White House government that is manifestly displayed.

And the second thing we're seeing is the rabid partisanship of the Obama White House. You take something Ebola. Look, Ebola is a heartbreaking tragedy. We ought to be doing everything we can to contain and to help stop that outbreak in Africa. But we also ought to be engaging in the common sense step of banning commercial airline travel from western Africa to the United States. Other nations in Africa have done that.

And this is not something that any -- in any rational world should be a partisan dispute. This should be a -- a matter of common sense. Both Republicans and Democrats across the country have called for it. And yet the Obama White House treats it like everything else, as all politics all the time, and they simply have dug in and refuse to take the common sense steps that are needed to protect this country.

HANNITY: All right, Senator, thanks so much for being with us.  Appreciate it.