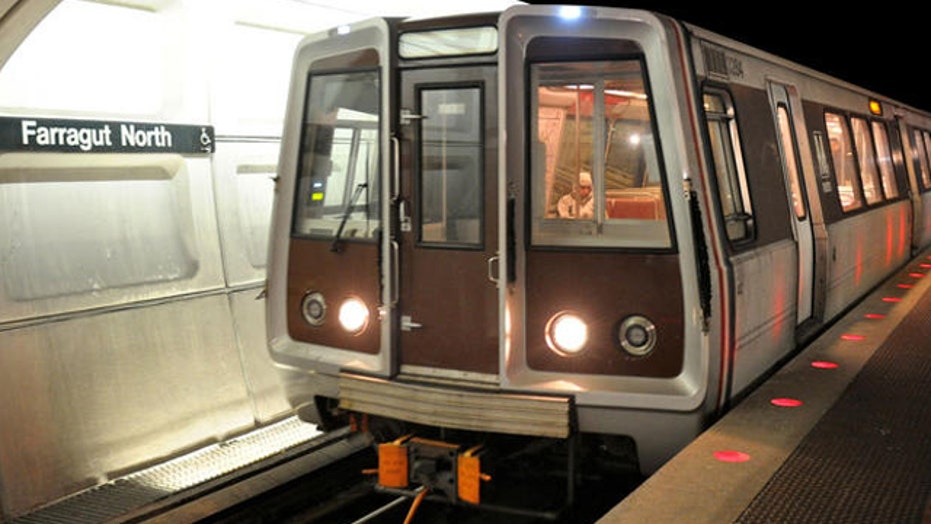 Taxpayers taken for a ride?

Effort to wipe out travel perks for federal workers shelved

TAXPAYERS TAKEN FOR A RIDE: FORCED TO PAY FOR FEDERAL WORKERS' TRANSPORATION

TRACY BYRNES: Cheryl, if you think they are going to cut any of the benefits they get for themselves, I have a bridge to sell you. They are going to milk us for as many perks as they possibly can, because well-- they can vote on it. They couldn't even bring this to the floor to discuss it. They were like "nope, no way. We want all these perks." This is going nowhere fast, and it does not bode well on our debt ceiling.

JONATHAN HOENIG: Well, everyone agrees that cuts are needed, but to Tracy's point, no one in government seems to be able to push them through. Even in blatantly, in my opinion, immoral programs, like this $160 million transportation subsidy. I mean, besides even the fact that it is full of fraud-a 2007 JAO study said as much as 25 percent of it is fraudulent. Why do government workers get these unbelievable benefits, these unbelievable perks that no one else out here in the real world gets. Their benefits are 48 more than those in the private sector. Those should be cut, and these should be first.

CHRISTIAN DORSEY: I don't have a problem with the program at all, because you all are unfairly characterizing it. Now, are you suggesting that you shouldn't subsidize transit but you should continue to subsidize parking, as has been done for the last 30, 40 years. You're singling out transit as part of the problem. And this is not just a program available to federal workers. These transportation subsidies are available to any employer. And in fact, in metropolitan areas more than half of private employers are offering these programs that require taxpayer subsidy. So all of a sudden you want to single out federal workers, who've had their pay frozen for two years--

WAYNE ROGERS: The thing that I don't understand when you say that, you know, every program is justified by "oh, it's needed, it's needed. Something is needed, therefore we do it. If you don't start cutting the fat, and this is fat-- all due respect to what you're saying-- federal workers are taxpayers, they are people being paid by the taxpayers. Why should he have the right to reach in my pocket and take my money or your money to pay for his transportation, when we have to pay for our own transportation? It's unfair, it's outrageous, it should be cut. And the congress-- let me finish-and the congress are cowards because they won't do it, because they're threatened by the union.

JOHN LAYFIELD: Yeah, you're right. And I think what happened to Wayne was Jonathan had interrupted him and diverted his attention and he ran into a tree, I think that's actually what happened. This is typical of congress. They talk about Simpson-Bowles, they talk about cutting, they talk about entitlements, they talk about revenue-they're not doing any of it. They refuse to do anything that is necessary to meet a budget. However, Christian is right; this is part of compensation. If, Jonathan's point about 48 percent higher for federal employees- if they're getting too much compensation, then you need to address that compensation. But this is not different than a vice president who gets a car allowance, that works for some Wall Street firm, or any other type of firm. This is part of compensation. If it's too high, you take it out--

JOHN LAYFIELD: Tort reform. This is pathetic. This is like a lifeguard suing a swimming pool because they're scared of water. These ambulance-chasing personal injury lawyers are ruining our legal system in America; they're ruining our health care professions. These guys need to just be disbarred, and what we have got to have is, we have got to have loser pays. If you bring some stupid lawsuit against some corporation hoping just to get a quick buck, it needs to be loser pays. And some of these attorneys who are just hoping, and sticking ads in the yellow pages to sue somebody and get some money out of it, they need to pay if they lose. This is ridiculous.

JONATHAN HOENIG: She's teaching since 1976 and all of the sudden she's developed this fear of children. I'm sorry, Cheryl, if you are afraid of kids, you can't be a teacher. If you are afraid of flying, you can't be a pilot. There is no such thing as a right to a job, certainly not one that specifically suits whatever your preferences are. I actually think the ADA, the Americans with Disabilities Act, is the problem here; that's what's given the legal standing for these types of frivolous lawsuits to be taken on. Employees become liabilities. I do think we need tort reform, but not on the national level. Tort reform is a national problem, but it doesn't need a federal solution, it needs a state solution. We need to privatize the schools as well.

CHRISTIAN DORSEY: Well look, to be fair, we don't know if this is frivolous or not. In all seriousness, if, as she alleges, she's had this condition, and it's documented, and you know, the school reassigned her to a place that would trigger the condition-it wasn't a fear of all children, it's a fear of little children-and if, in fact, that was done to punish her for some activism, then that ought to be heard in a court of law. I want to speak to John's point. Tort reform is necessary, but it comes not from any sort of legislation at the national level; it comes from reforming the ethics of the legal profession. Lawyers should not bring forth suits that have no standing under the law. Until we get the profession to not chase dollars, but to actually pursue justice, then we have a problem. But the issue is not with people and their particular issues, it's with attorneys who don't have ethics.

TRACY BYRNES: They're scary on certain days, I get that, but at the same time, you don't enter a profession when you claim you're scared of children. That's a joke, nobody's scared of children, come on! Every now and then you give them a cookie and they smile. Look, I think the problem here is the amount of money people get from lawsuits these days. You need to put a limit that the injured party can receive, and that will stop the ambulance chasers, because if the pot of gold ain't there, there's nothing to chase.

WAYNE ROGERS: I know this is going to sound crazy, but once again, I agree with Christian. I think he's absolutely right. It does start with that, and not only that, I'll extend it further-- not only just the lawyers, but the courts themselves. The judges in the courts have a position here that they could be responsible for. So you've got to revise that, too. There are some legitimate lawsuits that are brought. You can't just say that somebody wasn't damaged if they took some drug that killed them. Legitimate damage lawsuits brought from time to time, by legitimate lawyers, in legitimate courts. But Christian is absolutely right; if you revise that system, if you change that system, make them ethical, it'll be a lot better.

ARMSTRONG SCANDAL: PROVING THE GOVERNMENT SHOULD GET OUT OF SPORTS?

WAYNE ROGERS: Well, it's insane. Can you imagine? Here we are, taxpayers, paying into the federal government who is sponsoring sports teams? Give me a break! This is one of the dumbest things I've ever heard in my life. It's outrageous. The federal government is out of control, as usual, spending money that they shouldn't be spending on things like that. For example, we have even in certain places where arms of the federal government are going in and lobbying the congress, spending more tax money to lobby for-- this is crazy. This thing about Lance Armstrong and where they paid 30 million- nuts! Nuts. Get them out of the business.

JOHN LAYFIELD: Wayne is 100 percent right. Look at the 70s, 80s, and early 90s, the drugs that were in sports, and how it's been cleaned up, leading by the National Football League. Now all the major sports organizations are cleaning up their own programs, cleaning up their own system. The group that isn't? The most corrupt organization in the world is professional boxing, and the reason for that is because the government runs the commissions, and that's where the corruption starts. That's where you have all of this horrible mess. Get the government out of the sports completely and they will benefit from it.

CHRISTIAN DORSEY: I agree. They shouldn't be spending money to sponsor Armstrong's tour teams, nor NASCAR's tour teams, which is what the military spends many times more than 30 million doing. They shouldn't do it because it's not at all affective. I got to feel sorry for the Post Office. They are told to act like a business, they're required to function like a business, and then they do a business thing like sponsor a sports team, and it all blows up. But the reason they shouldn't have done it in the first place is because really it doesn't help at all, and it's not useful.

JONATHAN HOENIG: I think the NASCAR sponsorship, for the military to advertise I think is perfectly acceptable. We have a volunteer military. They're brave soldiers and they have to attract top quality talent, so they do advertising to do that. Why the heck does the Post Office, which is a monopoly as it is, a poorly run one at that-why do they need to advertise? Everyone hates their service, everyone's moving away from their service. For them to throw $30 million down on Lance Armstrong, it's vanity project. For the military to advertise, to recruit the soldiers that we so desperately need to protect our country, I think that's perfectly acceptable, and I encourage it.

TRACY BYRNES: First of all, why NASCAR, why not tennis? You know, it's like me picking my favorite kid. The government is supposed to be a neutral party that supports all of us. We shouldn't be choosing where taxpayer dollars go. What if I can't stand NASCAR? Because quite frankly, I can't watch it to save my life. NASCAR, I didn't want to. That is not where I want my dollars to go. I think that sports is absolutely the wrong place for my money.

TRACY BYRNES: You know, Cher, so many parents break their backs trying to pay for college. Why? Why don't you let the kid try to get a job and help out? Studies have actually shown they get better grades when they work for it.

JOHN LAYFIELD: The payroll tax hike, high unemployment is hurting a lot of Americans. You have a trade down effect. Family dollar benefits from that.

WAYNE ROGERS: If you have a muni-bond portfolio, beware. There are lawsuits being filed now by unions in California to put themselves, their pension plans, ahead of you the bond holders. It's just what happened with General Motors. Look out.

JONATHAN HOENIG: The DOW transports are at an all-time high. I think shipping companies, in particular, are well poised to benefit from inflation that I see down the pike. Diana Shipping, it's based in Greece-- risky bet-- but we own it in my fund and I like it moving forward.