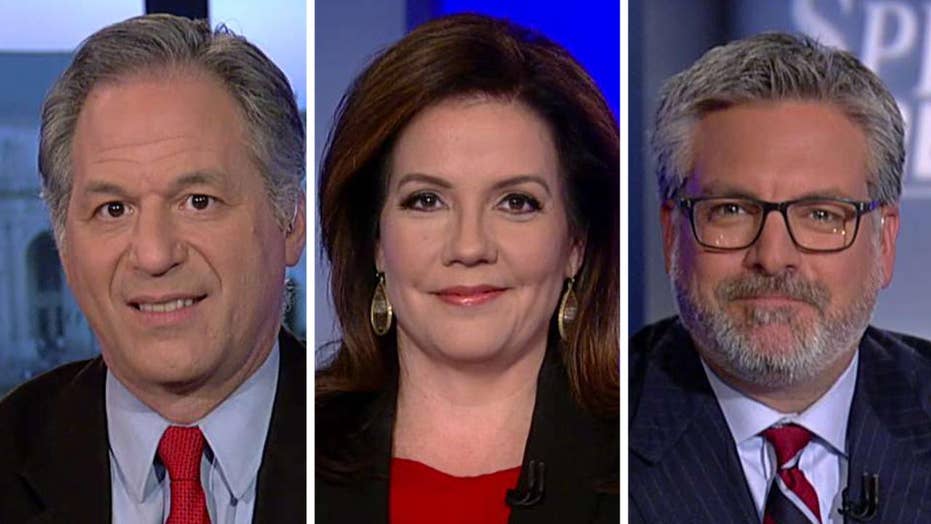 Trump administration officials downplay trade war with China after Beijing announces tariffs on US planes, cars and soybeans; reaction and analysis from the 'Special Report' All-Stars.

This is a rush transcript from "Special Report with Bret Baier," April 4, 2018. This copy may not be in its final form and may be updated.

SARAH SANDERS, WHITE HOUSE PRESS SECRETARY: We're going through the review period. We're very lucky that we have the best negotiator at the table in the president. It will be a couple months before tariffs on either side would go into effect and be implemented. And we are hopeful that China will do the right thing. Look, China created this problem, not President Trump.

CHRIS WALLACE, ANCHOR: White House Spokeswoman Sarah Huckabee Sanders today describing the state of trade relations between the U.S. and China. Time to bring in our panel: Steve Hayes of The Weekly Standard; Mollie Hemingway from The Federalist, and Charles Lane, of The Washington Post.

So Steve, China, I think it's fair to say, struck back harder today than most people expected, announcing tariffs on $50 billion of U.S. exports, including soybeans, which is really key, a big market in China for U.S. soybeans, and also aircraft. But no dates were set, and the Trump administration says it is not setting a date. It is going to go through a process that goes into mid or late May. So are we in a trade war with China or not?

STEVE HAYES, THE WEEKLY STANDARD: We are awfully close if we are not there already. Look, the big question is whether this is bluster from the Trump administration and a strong pushback, certainly a stronger pushback than many in the Trump administration had anticipated. You had Peter Navarro saying that he didn't expect that others would retaliate anyway because they would recognize that we were just trying to balance what the Trump administration sees as an imbalance, and lo and behold we are seeing pretty serious retaliation.

I think the Chinese were smart and strategic about how they retaliated. It's very clear that they picked industries and products that help fuel the economies in red states where Donald Trump did well, or states that Donald Trump won in. Those are going to be potentially politically painful for the president if, in fact, this goes through.

I would say as someone who believes in free trade, I was encouraged today by some of the rhetoric coming from the White House. We are a long way from the president's declaration just four weeks ago that trade wars are good and easy to win. We're not hearing people like Larry Kudlow and others saying, look, trade wars aren't good. The president is a free trader. We want to trade freely, we just don't want to be screwed in the process.

WALLACE: Mollie, are we in a trade war or not?

MOLLIE HEMINGWAY, THE FEDERALIST: I think the situation is that for the last several decades, the United States and other global entities have tried to treat China like one of the big boys in the hopes that they would rise to the occasion, that if they had a greater participation in the global economy, they wouldn't be doing all of their human rights abuses, they wouldn't continue the unfair trade practices, their dumping, their intellectual property theft. And what has happened is they haven't. They have really benefited from being allowed to be part of that global economy but they haven't changed these practices. There is worse than ever.

They support North Korea. They have gained quite a bit and we haven't gotten much in return. So I think what people are trying to do is push back against some of this. And people who do oppose tariffs, and tariffs are a tax on the people, they do have economic costs, they also achieve some pressure against other countries. So people who don't think that we should use tariffs to fight just this massive intellectual property theft that comes from China should probably come up with some other good ways to deal with this problem.

WALLACE: It is interesting, Chuck, because the futures on the Dow Jones were down 500 points, and in fact that market dropped 500 points today and ended up 230 points. So that is a 730-point swing. Clearly, the market was persuaded by the end of the day that we are not headed for a trade war, at least not immediately, and that there is a possibility that this bluster and talk about tariffs may end up in a deal.

CHARLES LANE, WASHINGTON POST: If so, I think the market is right. There is a possibility. But we don't, know and it's going to take probably a few months to come to rest on this.

I have been reporting on this for The Post over the last week or so and I have been reporting on trade for a long time, and what struck me about my conversation this week with people who are free traders and who support the WTO is how many of them, even many Democrats, will privately say the president is dealing with a real problem here with respect to China, that China has been stealing American intellectual property. China bars U.S. investors from operating in China unless they agree to turn over their technology.

And even many of these free traders were saying if it takes tariffs to get their attention and bring them to the table, we're for that. The question, of course, is once they are at the table, who has more leverage? Who is going to be better able to get to a deal, and ultimately, what the president's end game is, what his real objective is. And on that one, I think there is still a little bit of uncertainty.

WALLACE: Then there is the southern border, and here was the secretary of homeland security Nielsen at the White House today.

WALLACE: Mollie, there was some suggestion in John Roberts reporting that the president's real goal here, yes, he is going to send the National Guard, and, yes, he wants to help protect the border, but that the real point here is to try to put more pressure on Congress to finance his wall.

HEMINGWAY: Every president since Reagan has sent troops to the border. So it's not totally new that this president would do that. We don't have specifics on exactly what he's thinking.

But this is a very politically sensitive issue, and he keeps on trying to draw the contrast between Republican approaches and Democratic approaches. And Democrats in particular feel that this is a good issue for them to have more lax enforcement at the border, to allow more people to enter the country illegally, follow-up with amnesty programs without ever actually fixing the border. It was a huge issue that he succeeded -- that went well for him during the campaign, to highlight that border enforcement is lax and that we don't have a really sensible immigration policy. So the more he can highlight this, the better for him.

WALLACE: I want to get -- and we have about a minute left in the segment - - Steve, to one more thing, and that is the news today that Special Counsel Robert Mueller apparently told the president's lawyers that he is not the target of a criminal investigation, but he is the subject of a criminal investigation as part of an effort to get them to sit down to testify, and that the focus seems to be much more on the issue of obstruction of justice than collusion with the Russians. What you make of all of that?

I think there is no reason to believe that it will change. We likely would have heard about the significant evidence of the kind of collusion that people were talking about a year ago or when Robert Mueller was appointed, if Robert Mueller had it. I say all of that, and then caution yet again, there is a lot we don't know at this point.

WALLACE: And then of course there is also the question of how the president would perform and what he would say. Your thoughts about how this development, which was in your paper?

LANE: Well, the president that it again today. I want to talk to him, I want to talk to him. And he has been saying that a number of times. And his lawyers are waving him off because they fully understand the real hazards here is the potential perjury trap, that he would blunder into saying something false and get in trouble for that.