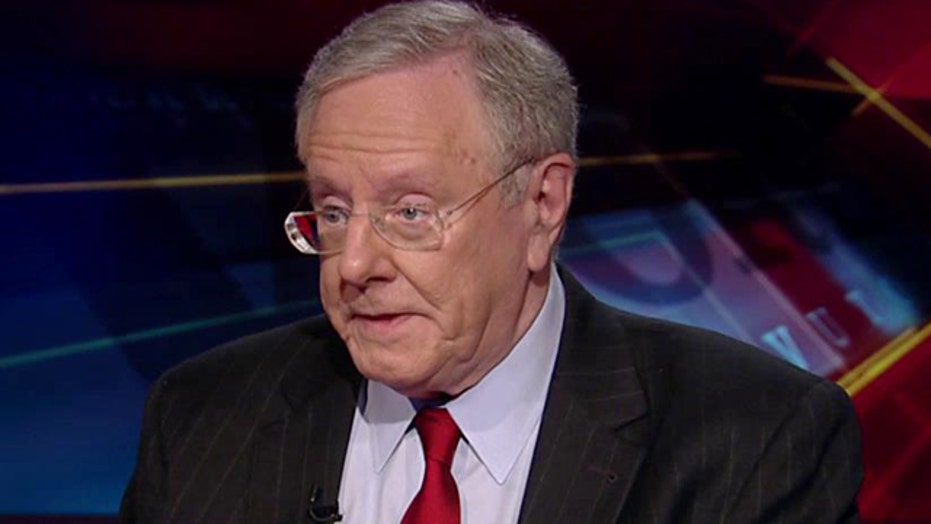 This is a rush transcript from "Your World," June 19, 2015. This copy may not be in its final form and may be updated.

RICK SANTORUM, R-PRESIDENTIAL CANDIDATE: We're going to propose a tax, a tax plan that is a simple, fair, flat tax.

GOV. BOBBY JINDAL, R-LA.: Look, we will sit down and figure out a comprehensive tax plan, but it needs to be lower and flatter.

DONALD TRUMP, R-PRESIDENTIAL CANDIDATE: A lot of people really do like the flat tax. Steve Forbes was a very strong proponent of it for a long period of time. And he was effectively selling it, but it never got done.

Its creator, Steve Forbes, with us right now.

Always good to see you, Steve.

STEVE FORBES, PRESIDENT & CEO, FORBES INC.: Good to be with you, Neil.

CAVUTO: They're all sucking up to you now, and copy...

CAVUTO: You should get copyright royalties here.

Now, let me ask you what the flat tax is. What does it do?

FORBES: What it does is, it gets rid of the current tax code, all 70,000 pages, millions of words, starts all over again, recognizing you can't redeem this thing, and replace it with a single rate.

Many plans like Rand Paul's has generous deductions for adults and for children, so you're not harming low-income people. You're allowing people to keep enough money, the basic necessities, before they pay tax to the government.

FORBES: For a family of four, yes. And they are going to have different variations of it.

Rand Paul, for example, also gets rid of the employee portion of the Social Security tax. Others will have different tweaks on it. But the key thing is, you start over, make it simple, so that people could understand it.  Cut out all the lobbying and really take a lot of the corruption out of American -- American life.

CAVUTO: But I think in Rand Paul's case, if memory serves me right, he has a 14.5 percent flat tax rate.

CAVUTO: He still keeps the charitable deduction, the mortgage deduction.

CAVUTO: Others have variation on what deductions come and go.

But he freely acknowledges that that will mean $2 trillion in less revenue for the government over 10 years. But he's OK with that, the idea that you would starve the beast. What do you think of that?

FORBES: Well, I think, even with the dynamic scoring that he uses, there will be significantly less than the $2 trillion, because the economic activity and the investment that will...

CAVUTO: In other words, it ignites activity.

FORBES: It would ignite activity.

CAVUTO: How do you know that? What makes you say that?

Can you imagine around the world if you see a 14.5 percent rate in the United States of America? Capital is going to come flooding in here, people wanting. Oh, this economy is going to boom again. You saw some of the same phenomenon in the 1980s.

So, in that sense, I think with some -- a little bit of spending restraint...

CAVUTO: Would businesses be paying the same rate?

CAVUTO: Would businesses be paying the same rate?

FORBES: And he -- his plan also has a 14.5 percent on investment income.

But they all have variations of this.

CAVUTO: The idea you could just -- that old proverbial dream of go out and do your taxes on an index card. Will that ever happen?

FORBES: I think it will, because having so many Republican candidates means that they have to break out from the field.

That's -- and so this is a good way to do it. You have something radical, but people understand it. They think it's very American. You make it, you pay it. And i think it also means that we're going to get a mandate the way Ronald Reagan got a mandate in 1980 for the then seemingly radical idea of cutting income tax rates 30 percent across the board.

Otherwise, it never would have happened. So, if you get that mandate, discussion on the campaign trail, refine it a little bit, it will happen.  That's the only way it will happen.

CAVUTO: The idea against it -- and you have heard this before and dealt with this.

CAVUTO: But I'm just positing it with you, that it's regressive and that it would hurt lower-income folks, even those that would be exempted from the first $50,000 in income. What do you think?

One, you don't pay the income tax unless you meet that threshold. But, two, with more economic growth, that is how it helps most the people with the least. One of the things that's tragic about this so-called recovery is that it's left behind people who need to get ahead. It's been really an upper-income recovery.

CAVUTO: No, I see what you're saying, but you have heard the rhetoric.

CAVUTO: That somebody earning $60,000 a year is paying the same percentage as someone earns $60 million a year.

FORBES: Well, the fact of the matter is, you don't have anywhere to hide it. And so, if you make it, you pay it. But this way, this way...

CAVUTO: Because there are so few deductions.

FORBES: There are so few.

CAVUTO: There are many who avoid paying taxes altogether.

FORBES: And also by having a low rate, you get more investment. That's the only way you grow an economy, people putting money, resources to work, creating new businesses, expanding existing ones, finding different ways to do things. That's how you get the dynamism. That's what made us a boom economy in the '80s and '90s.

CAVUTO: But part of that '80s and '90s experience, as you have reminded me, is that a lot of Republicans, ironically, took that revenue and spent it like crazy themselves.

So, how do you resist the temptation to spend all of that revenue that eventually does come into Washington? That's the other part of this, isn't it?

So, also, you have another crazy idea out there that -- from the Democrats, oh, saving money hurts the economy, as if you're putting it in a dark hole.  And what it means is when you're saving is that you're allowing the money to be put -- somebody else to put it to work either for consumption or investment.

So it works. Thirty countries around the world have put in variations of the flat tax, and it's worked fairly well.

CAVUTO: All right, we will watch it.

You were way ahead of everyone on this. And they should all give you some royalty fees on this, Steve Forbes. All right.