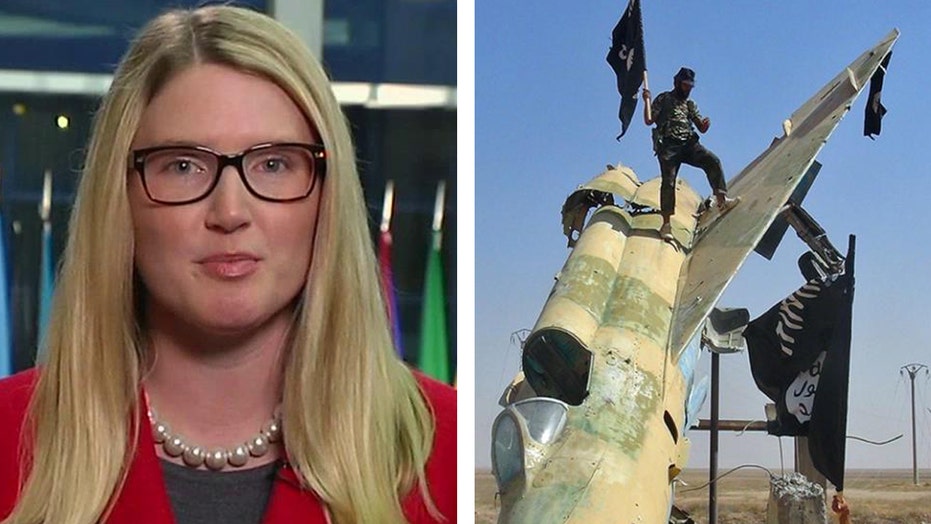 Harf: There are other forms of extremism that are important

State Dept. deputy spokesperson on war of words over what is 'extremism'

This is a rush transcript from "The Kelly File," January 12, 2015. This copy may not be in its final form and may be updated.

MARTHA MACCALLUM, GUEST HOST: Breaking tonight, the administration now talking up a summit meeting on global threats that will take place next month. It was originally scheduled to happen in October, but it just kept getting pushed down the schedule.

There are new questions about the White House strategy to fight the war on terror. The critics say there is no cohesive strategy for one simple reason they say --the Obama administration refuses to recognize the real enemy and call it what is, radical Islam.

ED HENRY, FOX NEWS SENIOR WHITE HOUSE CORRESPONDENT: Why wouldn't you use the phrase right there, that we are gonna take on Islamic extremism. You said all forms of violent extremism --

JOSH EARNEST, WHITE HOUSE PRESS SECRETARY: She asked me what the summit would discuss and all forms of violent -- violent extremism would be discussed, and obviously the most potent and certainly the most, you know, graphic display that we've seen in recent days is, again, is motivated by those individuals that seek to invoke the name of Islam to carry out these violent attacks, and that's certainly something we wanna work very hard to counter and mitigate and we've got a strategy that we've been discussing for some time to exactly do that.

HENRY: What is the most potent form according to you of extremism, why isn't the summit on countering Islamic extremism?

HENRY: Paris, Australia, Canada, isn't the thread through them that it's Islamic extremism?

EARNEST: Well, certainly those are -- the examples you cite are examples of individuals who've cited Islam as they'd carry out -- carried out acts of violence. There's -- there's no -- there's no arguing that.

MACCALLUM: Marie, welcome. Good to have you here.

MACCALLUM: You know, every time we see this exchange, it seems like the answer is so tortured like it's so difficult to say what everybody around the world seems to feel so clearly it is and what the leaders have said in Canada and Australia and Paris where they have felt it so potently and personally. They've all said quite clearly that the battle is against Islamic extremism. Why is it so hard to say?

HARF: Well, it's not hard to say, but it's not the only kind of extremism we face. I would recommend to folks looking at this administration's counterterrorism record, I would remind people that more terrorists who claim to -- to do acts of violence in the name of Islam has been taken off the battlefield in this administration than under any previous one because of our counterterrorism operations and our efforts that we put in place.

MACCALLUM: Let me ask you this --

HARF: -- that are also important.

MACCALLUM: -- tell me, what other forms of extremism are particularly troubling and compelling to you right now?

HARF: Well, look, there are people out there who want to kill other people in the name of a variety of causes. Of course, Martha, we are most focused on people doing this in the name of Islam. As we've talked about with ISIL, part of our strategy to counter this extremism is to have other moderate Muslim voices to stand up and say, they don't represent our religion. They speak for their religion more than we do certainly, and we need those voices to stand up in addition to all the other efforts we're undertaking.

MACCALLUM: All right. I just think a lot of other countries probably listen to the way we're talking about this and scratch their heads and wonder why it's so hard to spit it out in a lot of these -- these conversations.

Mike McCaul -- Chairman Mike McCaul said we -- we don't see a lead agency. There's no line item in the budget. There are no metrics to measure success. I don't think we have a strategy. We don't have a common definition for what this is. And, you know, obviously he's a critic, but there are people even former administration officials who say we've been working on this for a long time but we -- we're not sure whether or not we're getting anywhere.

So, talking about how you counter this extremist narrative, that's a tougher challenge but it's one we're committed to certainly, and I think other countries around the world look at the U.S. and the success we have had and how aggressive we have been and they know how committed we are to it.

MACCALLUM: But I think the world is looking for a leader, you know, someone in the van of Winston Churchill or FDR who says, "Look, we know what we're facing here. This is a global war. This is, you know, girls taken by Boko Haram. This is 132 students massacred in Pakistan. This is people who are going out for coffee in Australia. This is people who were come -- just showing up for work in Paris."

HARF: Well, I -- I -- I think all of these leaders have made very clear the serious threats we face. If you look at the president's speech at West Point, if you look at the things Secretary Kerry has said. It's not as easy as -- as defining at the way you just did. We have to look at each threat individually. All of those threats you just mentioned are from different groups and different places.

MACCALLUM: But do you believe --

HARF: And we countered them in different ways.

MACCALLUM: -- let me ask you this, Marie, do you believe that there is a common thread in everything that I just mentioned? Is there a common thread?

HARF: I think that's a little overly simplistic to be honest with you, Martha. I think you have to look -- if you talk about Boko Haram, yes, they claim to be active in the name of Islam, but you counter them in a very different way you counter a sleeper cell like we saw in Paris or Sydney or how you counter AQAP or Al Qaeda core. How you talk about these groups is different in terms of combating them based on where they are and the threat they posed and how you -- how you fight them really.

MACCALLUM: But it doesn't appear to me that these groups have any problem explaining what their motive is and where their motive comes from, and it's an extreme religious viewpoint that they scream from the top of their lungs every time they take somebody's life, every time they burn --

MACCALLUM: -- families inside their homes. So, I think to say that there's not a common thread - everyone, you know, it's not overly simplistic. We all understand all of these different groups. We just named many of them when we talked about it.

I wanna ask you one more question, in terms of secretary of state, John Kerry saying that he thinks it's quibbling to say that somebody should have been there. President Obama, Vice President Joe Biden, Secretary of State John Kerry, when we watched that moving march that was really a moment that touched so many people. They had to have been looking at each other saying, "Where's the United States?"

HARF: Well, I think the White House has been clear that someone senior -- more senior should have gone, but I also think there were several very moving moments last week with Secretary Kerry speaking in French directly to the French people on the day of the attack with President Obama and Secretary Kerry going to the French Embassy to express their condolences.

Secretary Kerry is going to Paris on Thursday to do so in person, and look, I don't think American leadership in the world is defined by any one march regardless of how important the march is. I think if you think it is that's really taking a pretty limited view of American leadership.

MACCALLUM: All right. We'll see, Marie. Thank you as always for being here. Good to have you here tonight.