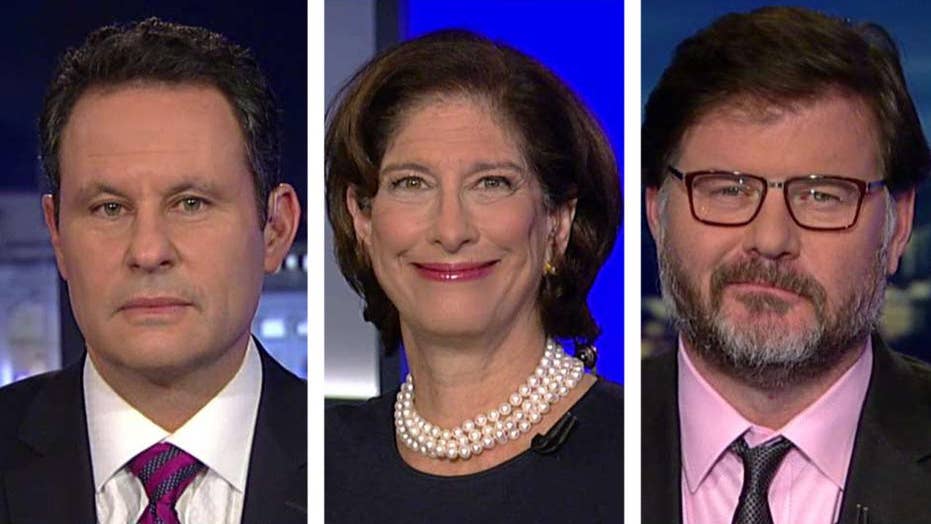 This is a rush transcript from "Special Report with Bret Baier," February 8, 2018. This copy may not be in its final form and may be updated.

SENATE MAJORITY LEADER MITCH MCCONNELL, R-KY.: This is our best chance to begin rebuilding our military and make progress on issues directly affecting the American people.

SENATE MINORITY LEADER CHUCK SCHUMER, D-N.Y.: It's a good deal for the American people and it's a strong signal that we can break the gridlock that has overwhelmed this body and work together for the good of the country.

Let's bring in our panel: Jonah Goldberg of National Review; Mara Liasson from National Public Radio, and Brian Kilmeade, co-host of "Fox & Friends," and author of the bestseller "Andrew Jackson and the Miracle of New Orleans, the Battle that Shaped America's Destiny."

Mara, the bill, the budget deal is stuck at least for the moment and for several hours on a procedural issue in the Senate. But even if it passes there, there's a real question what happens in the House when you've got opposition both from budget deficit hawks among Republicans and Democrats who want to see the Dreamers included. What are the chances tomorrow morning we are going to have another government shutdown?

MARA LIASSON, NATIONAL PUBLIC RADIO: I think there is a chance we could have one. First of all you have to get over the procedural hurdle of Rand Paul which I think is doable. You've just got to wait a certain number of hours.

But then in the House, what's interesting is that Paul Ryan wants a majority of the majority, in others about 118 Republicans to 120 Republicans to vote for this. I don't know if he's going to get that. The fewer Republicans he gets, the more he needs from Democrats, and Democrats are not in the mood to help him out. They wanted a guarantee. Nancy Pelosi stood on the floor for eight hours so she could get a guarantee from him that he would bring up some kind of DACA legislation on the floor. She hasn't really gotten what he she wanted. He said yes I want to solve the problem but I'm only going to bring up something that the president will sign.

WALLACE: And so although the Democratic leaders in the House are not pushing all of their members to vote no, some of the leaders like Pelosi, Joe Crowley, are saying they are going to vote against it.

LIASSON: She was part of the negotiation. She said there's a lot of good stuff in here for Democrats. She is not whipping it to get her members to vote no, but she's not personally isn't.

WALLACE: If they do pass this, one of the things we need to point out is this is going to blow up the deficit. Let's take a look at these numbers, because they're fascinating. This is what the budget deal would include, $165 billion more in defense spending over the next two years, another $160 billion separate from that for the military and State Department, $131 billion more for domestic spending, $90 billion in disaster relief, $20 billion for infrastructure, and $6 billion for the opioid crisis. Take that all together, that's more than $500 billion over two years in added military and domestic spending, and then add the tax bill which is going to cost 1.5 trillion over the next decade. By way of comparison, the total Obama stimulus package, spending and tax cuts, $835 billion. As you might imagine, deficit hawks are furious.

SEN. JEFF FLAKE, R-ARIZ.: If we Republicans support precisely the kind of reckless spending that we have for so long criticized it will mean an end of genuine fiscal conservatism in Washington.

WALLACE: Brian Kilmeade, whatever happened to the GOP as the party of fiscal discipline?

Now you have a situation where leadership says we have to go fund the government, and we want to get a two-year deal. And they watched Secretary of Defense Mattis come out and say the thing that's hurting our defense and the Pentagon worse than any other enemy is what's happening in Congress not fully funding us. We can't exist like this.

So what Paul Ryan and Mitch McConnell say is this -- they want domestic spending, we want defense spending. So we get this money to domestic spending, and if you look at it, a lot of it goes to what the Trump agenda is, to infrastructure, it goes to opioids, it goes to cancer research. So you get the Trump agenda moving forward on one hand. Then you fully fund the defense department for two full years. And then what you do is is you go back and do entitlements after that because it's the automatic withdrawal from our bank account which is hurting us, not the discretionary spending.

WALLACE: I want to get to the entitlements part of that with you, Jonah, but I also want to talk about the split among Democrats, because you've got Chuck Schumer, the leader of the Democrats in the Senate, saying this is a great deal, and then you have Nancy Pelosi, who it was pointed out, helped negotiate it, but now she's against it. Take a look.

HOUSE MINORITY LEADER NANCY PELOSI, D-CALIF.: I have an unease with it and I hope the speaker will man up and decide we in the house can also have what Mitch McConnell guaranteed in the Senate, a vote on the floor.

WALLACE: Jonah, how serious is this divide among Democrats given the fact that this bill can't pass either the Senate or the House without a lot of Democratic votes, particularly in the House.

JONAH GOLDBERG, NATIONAL REVIEW: I think Mara is right. It can pass in the Senate. It will just take longer.

On the House side, you have the problem, I think Bryon York said this last night here, that what Nancy Pelosi did was basically an exercise in virtue signally. The base of the party is very deeply committed to getting something on DACA. They want to hold Ryan's feet to the fire. She can't force anything so she wants to at least be on record with some very big symbolic show.

On the entitlement thing, I've just got to disagree with Brain on this. One of the reasons why this is such a great deal for Democrats is that this would make any possibility of Republicans doing anything through reconciliation possible. Reconciliation is the process by which Republicans in the Senate would only need 50 votes to get something done.

WALLACE: But they need to pass a budget to do that.

GOLDBERG: That's right. There is no way getting rid of reconciliation that the Republicans are going to be able to do entitlement reform and get enough Democrats to vote for it. This basically guarantees that the Republicans going into 2018 will have no other big legislative items on their agenda. They're not going be able to do any of the fixes to Obamacare that they wanted to do. This one of the reasons why Chuck Schumer really likes the deal. Except for the DACA part, there is nothing in this deal the Democrats shouldn't love, and while there is individual spending I can defend, particularly on the military, this basically amounts to a death knell for the Tea Party messaging of the Republican Party.

KILMEADE: There are a lot, as you know, the Democratic senators in these red states. So after they get this done, there's going to be a lot who have to turn around to their constituents and say yes, I've got to be fiscally responsible, too. So how many do you need to get? You need to get about eight. So if they get the budget that they want and there's a sense on March 6th they will get some type of DACA deal that they could get, why do you think, Jonah, can be a little bit optimistic that people are going to see welfare is a mess. Social Security needs to be addressed. And we can start pulling some of this in with Medicare. And you're about to smirk. How dare you?

GOLDBERG: Because I've been paying attention to Congress for the last 15 years.

KILMEADE: He also said he's going to build a solid wall. Now he says he's going to have search in certain areas were I don't need that. I'm going to use technology. He could pull back from that and not look like he's going back on his word.

WALLACE: All right, at least you are optimistic, and we appreciate that.

KILMEADE: Even if you don't really appreciate it.

WALLACE: No, I always appreciate it.