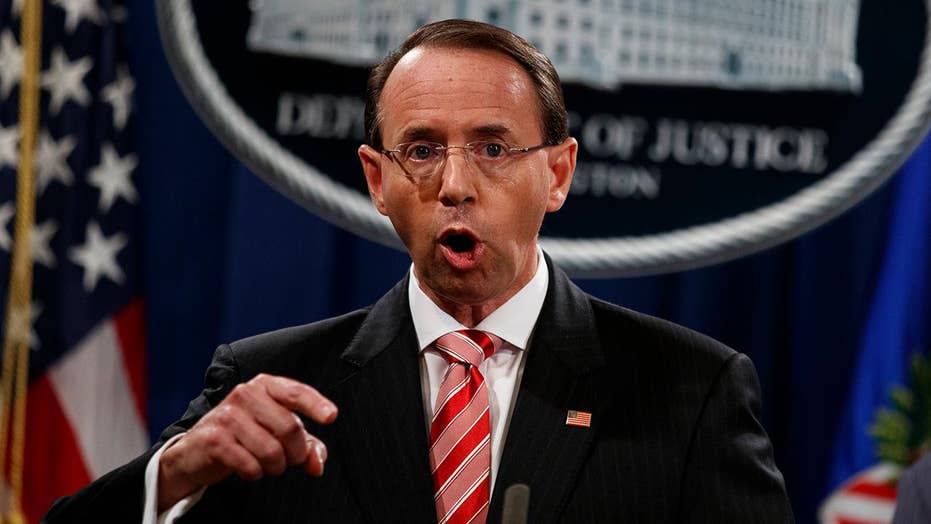 This is a rush transcript from "Special Report with Bret Baier," July 13, 2018. This copy may not be in its final form and may be updated.

ROD ROSENSTEIN, DEPUTY ATTORNEY GENERAL: The indictment charges 12 Russian military officers by name for conspiring to interfere with the 2016 presidential election. The defendants accessed e-mail accounts of volunteers and employees of a U.S. presidential campaign, including the campaign chairman. They also hacked into the computer networks of a Congressional campaign committee and a national political committee.

PRESIDENT DONALD TRUMP: I will be meeting with President Putin on Monday where we'll be talking about meddling. And I will absolutely bring that up.

MIKE EMANUEL, FOX NEWS: It's not like a Trump-Putin summit lacked for drama, and then all of a sudden you have Rod Rosenstein the Friday before dropping a bombshell, indictments on 12 Russian nationals. With that let's bring in the panel: Matthew Continetti, editor in chief of the Washington Free Beacon; Karen Tumulty, opinion writer for the Washington Post, and Mollie Hemingway, senior editor at The Federalist. Panel, welcome. Mollie, your thoughts?

MOLLIE HEMINGWAY, THE FEDERALIST: It's always good when you can hold people accountable for attacking a political party, when a foreign entity has attacked a political party. I'm not entirely sure how much new there is here. Read very like an un-redacted report of that report that came out of the Nunes committee, the House Intelligence Committee. We already knew sort of the means by which they had done these fishing attempts, about the electoral systems that were looked into.

And it also confirmed what we saw in that report, which is that this happened before Donald Trump was the nominee. It actually happened before super Tuesday, before the Florida, Ohio, Illinois primaries. These Russians planned to release their information before he was the presumptive nominee. So it's very good to find these Russians and hold them accountable. If you are a believer in the collusion theory, you didn't get a lot to go with.

KAREN TUMULTY, THE WASHINGTON POST: I think it was a major turn in the investigation because with these indictments the Mueller investigation goes actually right to the heart of Vladimir Putin's government. We're not talking about Russian troll farms here. We're not talking about mischief makers. And the fact that these indictments would be handed up three days before the president's conversation with President Putin is highly significant.

And one question here is the president knew that these indictments were coming before this trip. So his comments about witch hunts and the like have been sort of interesting in light of the fact he knew something that we didn't on this trip.

EMANUEL: Speaking of witch hunts, there's been conversation about whether or not the Mueller probe is a witch hunt. Take a listen to this.

SEN. MARK WARNER, D-VA.: My hope and prayer is that this president and his allies will, again, cease and desist on calling the Mueller investigation a witch hunt.

EMANUEL: So there you go. Matthew?

MONICA CONTINETTI, LONDON CENTER FOR POLICY RESEARCH: I think when Trump calls it a witch hunt he's referring to the narrative of collusion between these Russian agents and members of his campaign. It's important to know that we've charged the Russians who are up to no good in terms of interfering with the election on social media. Today we charged the Russians who were up to no good actually hacking and phishing the DNC, the DCCC, and John Podesta. And while there are Americans who are mentioned in this 29-page indictment, so far we've had no Americans charged in connection with that crime. So I think that's what the president is saying when he's calling it a witch hunt.

EMANUEL: There's also talk today about expectations going into the Trump- Putin summit. Take a listen to this.

EMANUEL: So Mollie, your thoughts heading into the big summit?

HEMINGWAY: I think it is appropriate to have expectations be very low. Relations between these two countries have been very bad for a long time. So just even a slight softening could be helpful for achieving things. It's good also that they're starting to talk about the new START treaty. Vladimir Putin had actually proposed that early on in the Trump administration, and President Trump had kind of batted him away. He has this belief that all of the agreements that President Obama arranged are bad deals. But sometimes that's true and sometimes that's not true. And one of the things that our two countries have done a good job with are nuclear agreements, and it's important to keep those and maintain those. So it's good if they start talking about that. But again, things have been so chilly, keep expectations very low.

EMANUEL: Karen, we had a bunch of Democrats on the Hill call for cancelling the Trump-Putin summit after the indictments today. Your thoughts?

TUMULTY: That is not surprising, but I don't know that that is anything more than election year posturing. One thing though that I think everyone should keep their eye on is the fact if Russia did this before they are likely to be trying to do it again. And I would like to see what kind of guarantees the president can come out of this meeting with that this is not going to happen this year in these midterm elections, because I have got to tell you, Congress has been pretty much asleep at the switch in hardening our own election defenses.

EMANUEL: Right. A lot of bickering but not a lot of action in terms of the folks behind us on Capitol Hill there. There's been some question about whether President Trump would be tough with the Russians. Check this out.

TRUMP: We have been extremely tough on Russia, including the fact that when the prime minister called when they had a horrible thing happen right here, very close by, we expelled how many people, 60. And $34 billion more was raised since I became president in NATO. That means that the other 28 countries have put in $34 billion more into NATO. Do you think Putin is happy about that?

EMANUEL: Certainly presidents Trump and Putin are charming, but you expect some tough talk in that summit, Matthew?

CONTINETTI: I think so. I think the president and his team recognize that a year ago when President Trump met with President Putin, they arranged a cease-fire in south western Syria, a cease-fire that was broken by the Syrian government aided by the Russian government last month. So I think that goes a long way to telling us how much trust we should put in Russian promises, which is not much.

EMANUEL: Thoughts, final thoughts on going into the summit on Monday?

HEMINGWAY: It really is true that Russians are bad people. But that is not sufficient for a foreign policy. We really need to think through what we want to have, how we want to work with them, particularly respecting --

EMANUEL: Bad government. Let's not blast all the people.

CONTINETTI: Keep your objectives low, trade, maybe an extension of START with Russian compliance on the INF treaty which they have been in violation of now for over a year, and maybe you have a deal.

TUMULTY: It will also be, I think, the outcome of this meeting is going to be very important especially after all of the drama of this week and kind of reassuring our allies, too, there is a strategy, because right now, I think the president comes out of this European trip having left a lot of our closest allies very, very concerned about this meeting.