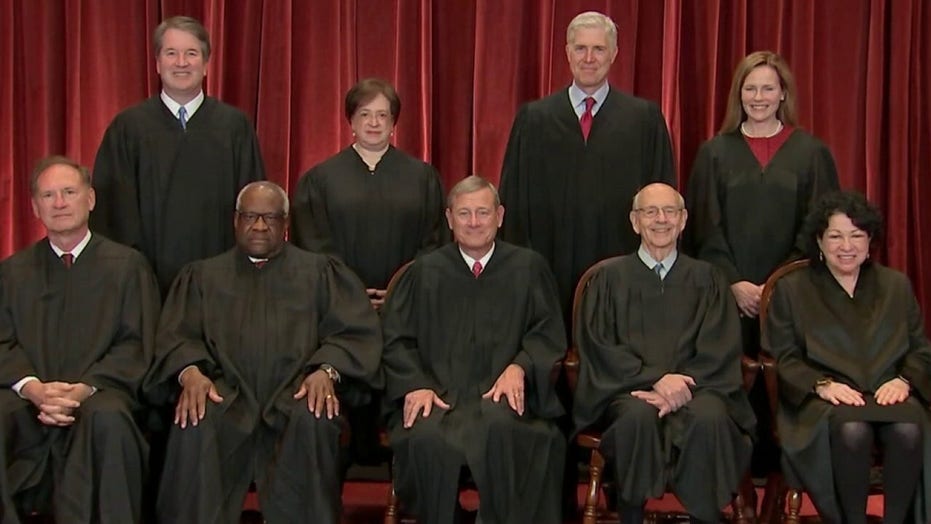 'Special Report' panel weighs in on president's measures as the Supreme Court takes up the case.

This is a rush transcript of "Special Report with Bret Baier" on December 22, 2021. This copy may not be in its final form and may be updated.

BAIER: Breaking tonight, just in the past few minutes, the U.S. Supreme Court just announced it will hear oral arguments in separate appeals over President Biden's vaccine mandates. This is for large businesses, 100 or more, and for healthcare workers at facilities receiving Medicare and Medicaid funding. Enforcement of those policies have been put on hold pending resolution in the high court.

These separate arguments will be Friday, January 7th, we're told, one hour for each issue, and we expect rulings on the merits of the president's mandates relatively quickly. This is a big deal. We knew it was going to end up in the U.S. Supreme Court. Now the court is saying we take these cases, and we will hear them. Oral arguments, January 7th.

Let's bring in our panel, start there, Juan Williams is a FOX News analyst, Morgan Ortagus, former State Department spokesperson, and syndicated radio host Hugh Hewitt. Hugh, this is really where this is all coming to. The Supreme Court was going to have to weigh in because you had a number of courts weighing in with different rulings.

HUGH HEWITT, SYNDICATED RADIO HOST: Yes, Bret. And I'm going to go out on a limb here. I think you have got at least six justices led by Justice Kavanaugh who are very suspicious of administrative agency overreach, and that this will be struck down, the mandate in private employers, at least for certain struck down.

And I think it will be fairly quick. And I don't think it's going to be any great dispute among the court. You might even get Justice Kagan to say it's under something that's very obscure, the Chevron doctrine, this is just beyond what OSHA was intended to do. If Congress wants to give the president this power, they have to pass a law to do it.

BAIER: Juan, the president was backing it up, saying how important it was. We'll see what happens with these arguments, but it's clearly going to be adjudicated, basically, by the Supreme Court.

JUAN WILLIAMS, FOX NEWS POLITICAL ANALYST: Yes. I don't think there is any surprise there, Bret, as you said earlier. The reality is we're at the point where a high percentage not only of government employees, but private sector employees are vaccinated because of, not federal mandates, but because the employers themselves have said this is what is best for our staff, our workers, and our customers in terms of keeping our economic interest to the forefront and not allowing people who just choose not to get vaccinated to determine the health of others. So it becomes a communal argument.

Hugh makes a very good point about the Chevron argument. As a matter of law, you don't want government interfering in something like this. But the counterpoint would be that you have at this moment a critical national health emergency. And does the court understand or care about that point?

BAIER: Yes. Morgan, last word on this, but the politics of this are really interesting if you look at the polls. It's just not a popular thing, even as the administration is defending it in court and will do so on January 7th.

MORGAN ORTAGUS, FORMER STATE DEPARTMENT SPOKESPERSON: Listen, there are some encouraging things this week on the political side. President Biden credited President Trump and Operation Warp Speed for the vaccines that we're all taking today, and President Trump thanked him. So I think to get over this political divide on the vaccine, that's an important point, that everyone act like grownup adults and recognize that there is a lot of input from both parties on this.

However, I think there is going to be auto big sigh of relief from many conservatives around the country that the Supreme Court is hearing this, especially when we have today in Washington, D.C., the mayor, Muriel Bowser, saying, similar to New York City, to attend a movie theater or to go into a restaurant or a bar other a nightclub, if anyone still does that, you're going to have to show your vaccination card.

And I think for a lot of people who are pro-vaccine but anti the mandate, it seems like a huge amount of government overreach to show your vaccination card to get a hamburger. And when does it stop, right? Is it with the next booster? Or what if we have some other disease, a pandemic, or something else that's inflicting the country, how much of your personal information, of your personal medical information are you going to have to show if you want to grab a beer with friends?

And so I'm delighted that the Supreme Court is hearing this, because while I think vaccines are crucial, the mandates are going to remain political sticking point in this country.

BAIER: All right, meantime, the supply chain crisis today in Washington, you would not have known that it was maybe a big issue or that it still is an issue in some parts of the country, a lot of parts. Take a listen.

UNIDENTIFIED MALE: The recent rise in COVID-19 cases and the emergence of the Omicron variant pose downside risks to the employment and economic activity and increased uncertainty for inflation.

JOE BIDEN, (D) PRESIDENT OF THE UNITED STATES: We heard a lot of dire warnings about supply chain warnings leading to a crisis around the holidays. So we acted. The much predicted crisis didn't occur. Packages are moving. Gifts are being delivered. Shelves are not empty.

BAIER: We've saved Christmas. Hugh, it wasn't a problem to begin with, we shouldn't have worried. What do you think about that?

HEWITT: You can't make this up. And any American who is trying to get an at home COVID test right now can't get one. In fact, you can't get a booster appointment in a lot of places where suddenly serious people, and the president made a good appeal, cited President Trump getting a booster as well. So people who want to get a booster, they can't get a booster.

And when you go to stores, lots of stuff is missing. And that's because if you run along the Huntington Beach, and that's where I like to go, and I'm in California, along the Newport Beach, Huntington Beach Boardwalk, the cargo ships are lined up as far as the eye can see because they might be going 24/7, but you can't fix what was broken in a year overnight. And it's still broken.

WILLIAMS: Well, look, as a political argument, I don't know, but I think the reality has to be spoken to, which is that the big companies, the big stores, Walmart, Target, Amazon, they all say look, our shelves are full. We don't have any issue here supplying gifts for Christmas. And if you look at the metrics right now, UPS, FedEx, the U.S. Postal Service, they are exceeding their performance pre-pandemic, in other words, in 2019. And they are doing so with more people placing more orders because there is more money being spent right now in the United States by consumers. This is outstanding performance. So we can have a political argument. But I think the hard facts really are on the White House side here.

ORTAGUS: Well, listen, if anyone is stealing Christmas, it's the Chinese Communist Party who unleashed this plague on the world two years ago. They still haven't been held accountable. And a lot of people -- I think we all on this panel probably know a handful of people that have been diagnosed with COVID. It's going around the country, this variant. And people are not able to spend Christmas with their families because everyone is catching this silly variant. So if anyone is stealing Christmas, I'm blaming it on the Chinese Communist Party.

BAIER: There you go.

Hugh, final thing. Is this administration heading into the new year hurting politically? Where do you sense that the politics is as you head to 2022 with the Biden administration?

HEWITT: I try and be objective about this, Bret. They are on their heels. They are going backwards. Israel, Germany, and England are going into a fourth booster shot. We're disorganized. Regeneron is not out there. Only one of the three monoclonal antibodies work, and it's not available widely. Omicron is omnivorous, and it's going to be omnipresent pretty soon, and it's going to take the people who are not vaccinated.

And so it's going to be a dark winter, and it's because the year that has been given to team Biden, that Operation Warp Speed gifted them vaccines and the supply chain, has been squandered on politicking over big tax hikes instead of taking on COVID. So they are on their heels. And Juan can disagree with that. That's not messaging. That's just true.

BAIER: We'll see where Build Back Better and whether they resurrect some of that in the new year.

Panel, stand by if you would. When we come back, tomorrow's headlines with the panel.

BAIER: Finally tonight, a look at tomorrow's headlines with the panel. Hugh, first to you.

HEWITT: Profound energy crisis gripping Europe, Bret. We are going to see gas prices already up 600 percent skyrocket in the next month. Germany is shutting down three of their nuclear plants. France, two of their nuclear plants have got pipe problems, and there is just a lack of energy everywhere on the continent. Long, dark winter ahead.

WILLIAMS: I want to cheer Hugh up, I'll tell you.

In fact, gas prices in this country are going down, and we see airports are busy. The train stations are busy. The highways are busy. So I think tomorrow's headlines is America is on the move for the holidays, and Santa's elves, they have booster shots, and they are ready to deliver for our children.

BAIER: All right, there you go. Morgan?

BAIER: There you go. He is always factoring into the stories. All right, panel, thanks so much. Have a good one.

Tomorrow on SPECIAL REPORT, the chairman of the National Republican Congressional Committee talks about the GOP's path to regaining the majority in the House. They are confident about it. We'll go over some specifics with him.

Thanks for inviting us into your home tonight. That's it for this SPECIAL REPORT, fair, balanced, and still unafraid. "FOX NEWS PRIMETIME" hosted by Brian Kilmeade starts right now, unless you have a headline, Brian.

Copy: Content and Programming Copyright 2021 Fox News Network, LLC. ALL RIGHTS RESERVED. Copyright 2021 VIQ Media Transcription, Inc. All materials herein are protected by United States copyright law and may not be reproduced, distributed, transmitted, displayed, published or broadcast without the prior written permission of VIQ Media Transcription, Inc. You may not alter or remove any trademark, copyright or other notice from copies of the content.