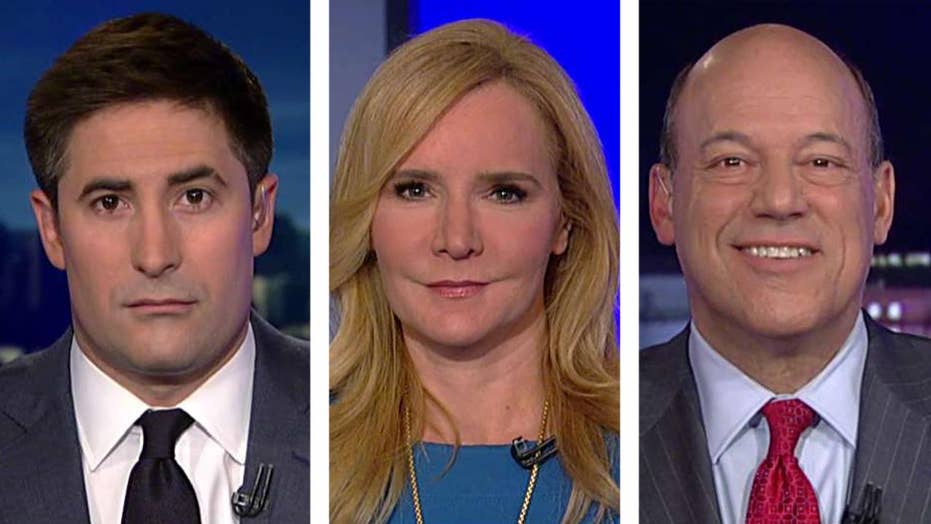 President Trump to promote a 'safe, strong and proud America' in address to the nation.

This is a rush transcript from "Special Report with Bret Baier," January 30, 2018. This copy may not be in its final form and may be updated.

WHITE HOUSE PRESS SECRETARY SARAH SANDERS: Tonight this is his stage and his time to talk directly to the America people. And I think you are going to see a lot of the president himself come through in his words at the state of the union. When he makes big addresses, he is yet to have a big moment that hasn't gone well. This is a person who rises to the occasion. I think you're going to see a lot of that night. Again, he has a great story to tell.

REP. KEVIN MCCARTHY, R-CALIF.: The first thing I want him to ask the question Ronald Reagan asked. Are you better off today then you were before?

REP. CEDRIC RICHMOND, D-LA.: I will tell you today that the state of our precious union is fractured. It's divided. And the president has the responsibility and gets the credit for making it that way.

Ari, let me start with you. You've been through a few of these. State of the unions can be laundry list, but sometimes they can have an overall message. It seems like this message from the excerpts and what the president said today is about unity and coming together.

ARI FLEISCHER, FORMER WHITE HOUSE PRESS SECRETARY: And that is exactly what Donald Trump needs to preach tonight at the state of the union. This is going to be his biggest audience of his presidency. You're going to have tens of millions, 30, 40, sometimes 50 million people watching. So it's an unfiltered chance to show people who you are and what's in your heart.

And it's also the forum in which the president delivers that speech, it is made for presidents. And there's going to be applause for the things he says, which also sends a nice signal to people at home when they hear the ratification, the reinforcement of what he's saying through applause. Everything favorable for the president. But his weakness is his unfavorable ratings. He still is underwater. And the state of the union like this, especially if it is unifying, as the White House tells us it will be, has a chance to fix that, to move the numbers in Donald Trump's direction. It's his best chance to move those numbers.

BAIER: It is, A.B., the one time when all of government comes together, whether they are on the same sheet of music on the agenda, but they are all in the same room. And the president makes his pitch.

A.B. STODDARD, REAL CLEAR POLITICS: I think it's unfortunate that a bunch of Democrats, lawmakers are saying that they want to boycott the event. This is an event that everyone should be at, whether they are members of the coequal branch in the Congress or obviously in the president's administration.

But it is an opportunity for Donald Trump to tell a great story on the economy. Stock market gains, the benefits of deregulation, obviously the success of passing tax reform. Different than last year's joint address to Congress on February 28th. He is trying to portray himself, portray his accomplishments. I think it's a night to take a victory lap on those topics.

We are told he is going to extend an olive branch to Democrats on infrastructure and immigration. I'm sure he will talk a tough talk on border security and those things he campaigned on, but I think that it is an opportunity for him to say we have done what we can on the Republican side and it's time to reach across the aisle and I want to be productive. In light of those numbers Ari talked about and the headwinds Republicans face going into the midterms, it is the best posture for him to take.

BAIER: Jonathan, speaking of numbers, I referenced this poll, FOX poll four last night. This is the president's job performance. And as you split down the groups, you have Republicans, 86 percent, Trump voters, true Trump supporters, 92 percent, Democrats at 11 percent, and independents at 38 percent. Part of this, his overall approval, by the way, in this poll, is 45 percent. It's interesting even under all of the attack he's taken that he has still managed to get approval that's in many polls that's in the mid-40s or upper 40s.

JONATHAN SWAN, AXIOS: Well, Bret, one of the stories that hasn't really broken through and I think people are still missing is, yes, the tax bill was deeply unpopular when it was released, when they passed it, but the numbers have been going in the right direction. It's been moving. And it could keep moving, by the way, when we keep seeing companies announce bonuses, jobs, people starting to get a feel in their paycheck, which is one of the big things that the president wanted to kick in before the midterm election.

So I am hearing people -- I had lunch today with a very prominent Democrat who suggested to me that they were less than easy about the notion that they're going to take the House. So I am starting to hear some doubt enter people's voices about this supposed foregone conclusion that Republicans are going to lose the House this year.

BAIER: Which is an amazing turnabout if you think about it, what we've heard in conventional wisdom over the past few weeks.

FLEISCHER: No, of course you don't because it's not the way most coverage works. But this is a precursor, Bret. This is a precursor to the 2019, 2020 Democratic upcoming primary where you're going to have 15, 20, maybe even 25 Democrats running, and every single one of them is going to try to get to the left of one another until they fall off the face of the earth because the earth is flat if you're that far left. You just can't have that many candidates try to slice up a political ideology. It's going to be a race to the left. You will start to see that tonight in the response to Donald Trump.

BAIER: A.B., obviously there are upheld challenges for this president and one of them is this investigation. We don't know what we don't know, but the reaching across the aisle is pretty tough if Democrats are at about 11 percent and lawmakers don't seem like they are budging to work with this president, at least not yet.

STODDARD: But Bret, you know it's in the outreach. If it's genuine and he's not tweeting at them and calling them losers and he actually brings them into meetings and does what he's done a few times, having them at the table at the White House, if he actually stays at the table with them and shames them into the process, even the ones who don't want to budge, and stays in negotiations with them about his position on a fix for DACA and the Dreamers, doesn't change his mind the minute they leave the meeting, he actually will end up in a relationship that can bear fruit in an infrastructure package.

So I think that the next couple weeks will be consequential. He certainly doesn't want a government shutdown. His highest approval ratings ever on anything or him striking a deal with Chuck and Nancy, much the consternation of his own party leaders. Even though it wasn't really a substantive deal, it was his finest moment if you look at polling, and I know he likes polling. So I think tonight is the opportunity and so is this month.

BAIER: And quickly, Jonathan, he believes, I get the sense this administration believes that they are in a pretty good position negotiating-wise after what they saw was a win in the last shutdown showdown.

SWAN: I think they were surprised, actually. I think they were surprise that Schumer played it the way he did and capitulated after three days. So yes, agree. But there is a nervousness about the next step, and ultimately I think most of the people in there who have paid attention to politics for the last decades know that the party that controls the House, the Senate, and the presidency probably won't get off completely free if this falls apart in negotiations.