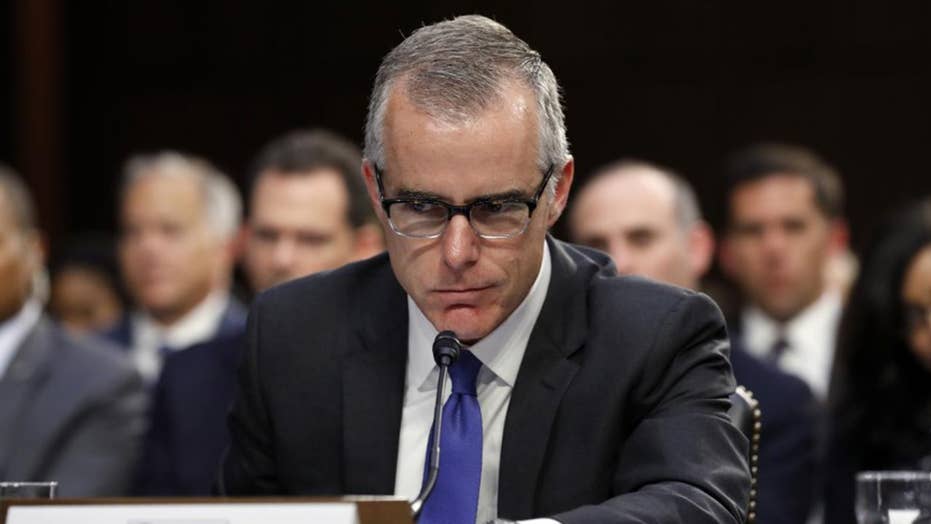 This is a rush transcript from "Special Report with Bret Baier," March 19, 2018. This copy may not be in its final form and may be updated.

REP. ADAM SCHIFF, D-CALIF.: His firing may be justified. There is no way for us to know at this point. But even though it may have been justified, it can also be tainted.

SEN. ANGUS KING, I-MAINE: He had 21 years of exceptional service and the FBI. So it was clearly rushed. And I think there are questions about that and whether the administration was putting pressure on the Justice Department to take this action.

BRET BAIER, ANCHOR: There are many questions, and we are expecting to get the inspector general's report any day now, and that could have many of the answers that are some of these lawmakers are looking for.

In the meantime, the president first tweeting about Andrew McCabe, the number two man, fired before his retirement. "Andrew McCabe fired, a great day for the hardworking men and women of the FBI, a great day for democracy. Sanctimonious James Comey was his boss and made McCabe look like a choirboy. He knew all the lies and corruption going on at the highest levels of the FBI."

In the meantime, on the Mueller probe, the president tweeting over the weekend, "The Mueller probe should never have been started in that there was no collusion and there was no crime," he wrote It was based on fraudulent activities and a Fake Dossier paid for by Crooked Hillary and the DNC, and improperly used in FISA COURT for surveillance of my campaign. WITCH HUNT!" "Why does the Mueller team have 13 hardened Democrats, some big Crooked Hillary supporters, and zero Republicans? Another Dem recently added. Does anyone think this is fair? And yet there is no collusion."

So it was a busy weekend on Twitter and elsewhere. Let's bring our panel: Guy Benson, political editor at Townhall.com; Mara Liasson, national political correspondent for National Public Radio, and Mollie Hemingway, senior editor at The Federalist. Mollie, fallout from McCabe and then the comments about the Mueller probe.

MOLLIE HEMINGWAY, THE FEDERALIST: Look, it is never a good thing when your number two at the FBI is fired for bad behavior. What he has suggested is that this is related to him leaking and lacking candor about it. It actually might be much bigger than that and there would be reason to think it is much bigger than that. He's had a series of problems related to leaking and manipulation of processes and investigations.

So it was a huge hit for this larger narrative. What we were told a year ago was that our intelligence chiefs and the highest people at our intelligence agencies and law enforcement agencies were apolitical, nonpartisan boy scouts who had a very legitimate reason to be worried about Donald Trump. And a year later, we've had all these firings, removals, reassignments, and you have on Twitter you can see people tweeting in a crazy fashion against this president. That narrative looks patently absurd now. It looks like a much different story than we were told a year ago.

MARA LIASSON, NATIONAL PUBLIC RADIO: I think what's really interesting is the president's reaction to this. We are going to find out the reasons why McCabe was fired when, as you said, the I.G. report comes out. But he was doing a victory dance in the end zone, then he started attacking Mueller for the first time by name, and then one of his personal lawyers issued a statement saying the Mueller investigation should end. That has never happened before. Up until now, the White House has said they were cooperating.

So then became an uproar, is the president getting ready to fire Mueller? I don't think so. I think what's happening is he is intent on discrediting the Mueller investigation so that whatever Mueller comes up with, he can dismiss it.

BAIER: As you speak about John Dowd who said what he said, Trey Gowdy, congressman, was asked about that this weekend.

REP. TREY GOWDY, R-S.C.: I think the president's attorney frankly does him a disservice when he does that and when he frames the investigation that way. Chris, if you look at the jurisdiction for Robert Mueller, first and foremost, what did Russia do to this country in 2016? That is supremely important and it that has nothing to do with collusion. So to suggest that Mueller should shut down and that all he is looking at is collusion, if you have an innocent client, Mr. Dowd, act like it.

GUY BENSON, TOWNHALL.COM: Yes, I think that is a fair point for Gowdy to make. What's strange is this conflation that we're seeing of Mueller and the McCabe firing. These are in my view separate issues, although the president is connecting them and a lot of his fiercest critics, ironically, are also connecting them.

But when you look at the McCabe firing, I think you can make a very strong case based on the facts that he would have been fired regardless of who was president, and regardless of the whole Mueller investigation even if it didn't exist at all, because the malfeasance that is alleged apparently against Mr. McCabe occurred in the 2016 election. And that investigation, the I.G. probe, was launched before Donald Trump became president. And it was an Obama appointed inspector general who came to conclusions about what McCabe did.

And last but not least, the person who made the decision or the office had made the decision to recommend firing him was this ethics office at the FBI that was completely nonpartisan and the woman who runs it was appointed by Bob Mueller. On the merits, it looks like this was misconduct that McCabe is responsible for back in 2016. It should have nothing to do with Mueller.

HEMINGWAY: But also I think what Gowdy said was also kind of weird. It is possible for federal investigations to go off the rails, and it has happened before. You can talk to Richard Jewell's family about that. He was the guy targeted by the FBI. They leaked his name and basically ruined his life before finding out that he wasn't responsible for the bombing in Atlanta.

Robert Mueller and James Comey themselves were involved in the worst botching of an FBI investigation ever, which was going after the innocent man Steven Hatfill in the anthrax killing, and they oversaw that and were quite confident about it. And Ted Stevens, the senator from Alaska, who had his vacated due to gross conduct by the FBI, I think Mueller was also head of the FBI at that time. So sometimes investigations can go off the rails, and it's incumbent upon an attorney to actually say that and to defend his client if an investigation --

LIASSON: The president has involved himself in a way that no other president has, urging the Department of Justice to make sure that McCabe was fired before he qualified for a pension, which happened about 26 hours before he would've qualified. And then connecting the McCabe firing with the Russia investigation. McCabe would be potentially a witness in an obstruction of justice case.

HEMINGWAY: Is also true that the president has complied with the Mueller probe for over a year.

HEMINGWAY: But if you know there is no collusion and you've been working with them for over a year and it is still going on and this narrative is still being pushed to undermine the legitimacy of a president, I can imagine someone getting pretty frustrated.

BAIER: There is all this uproar about the president speaking out about Mueller for the first time and speaking out about the investigation. There was another president who did that, Bill Clinton. "New York Times"," February 9th, 1998, the white has broadened its attack today on Ken Starr, independent counsel investigating accusations involving President Clinton and a former intern, calling Mr. Starr corrupt and demanding an independent investigation of suspected links to his office. Paul Begala, senior White House political advisor, accused Mr. Starr of using the sweeping powers and unlimited budget of his office to conduct a politically motivated witch hunt of the president and to intimidate witnesses into testifying against Mr. Clinton.

LIASSON: I remember that very well. And don't forget the best rightwing conspiracy. This is a tried a tried-and-true playbook. You are being investigated, you want to discredit the investigator. I think it is really similar to Clinton with one difference, which is Bill Clinton didn't go after the FBI. And the president has gone after the FBI. In his tweets this weekend he talked about corruption and lying at State Department, Department of Justice, and the FBI. He really has gone after institutions here in a way that's different.

BENSON: The other point I would make is people are saying there was pressure from the president to fire McCabe before he got his retirement benefits or has pension. I think it is a fair thing to point out. But if it is determined by the nonpartisan I.G. and the Office a Professional Responsibility that this man leaked in an unauthorized way to the media and then lied about it, should that person get a taxpayer-funded pension? That is a completely reasonable question to ask.